No sleep 'til Brooklyn: Stiff Little Fingers give Club Europa a jolt

This time, it was Brooklyn -- and seeing Stiff Little Fingers live was a fitting way to cap off our nine-day East Coast tour.

After local punk-power-poppers Heap warmed up the crowd, it was time for another round of SLF's heart-pounding and teeth-grinding tunes that I first witnessed live in 1981. (In total, Carrie and I have seen the band about 20 times over the years.)

SLF opened with the fiery "Roots, Radicals, Rockers and Reggae," and although the crowd was a bit subdued at first, the mayhem kicked in a few numbers later with bobbing heads, bashing bodies and screaming vocals lasting the rest of the 75-minute set.
﻿﻿
﻿﻿
Aside from 2004's "Strummerville," the band ripped through tunes from 1977-1982, including the usual suspects like "Suspect Device," "Alternative Ulster," "Nobody's Heroes," "Tin Soldiers," "Just Fade Away," etc. (It would have been nice to hear some of the newer-era songs, but with rhythm guitarist Ian McCallum sadly missing because of an illness, replacement John Haggerty from Chicago's Naked Raygun and Pegboy probably only had time to practice the basics.)

Jake Burns is as vibrant as ever on guitar and vocals and still sings the lyrics with conviction some 30 years down the road. This is the first time we've seen Ali McMordie back in the fold on bass since the early '90s, and the man is a ball of energy, nearly jumping out of his skin at times. And, of course, Steve Grantley's solid drumming keeps the whole SLF thing rolling. As for Haggerty, he was living the dream playing alongside Burns and company (Raygun covered "Suspect Device") and he fit in nicely on stage right.

Since SLF didn't make it as far as Seattle on this tour, we were glad to represent our fair town back east. And we're ready for more when the "Roaring Boys" are up for it. 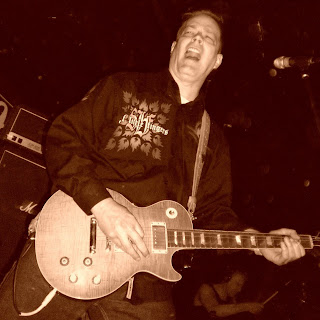