'Noshing and Moshing' -- Freaks and Geeks: the Punk Episode 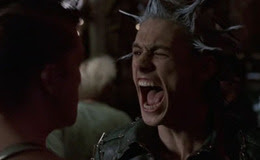 From the very first episode of Freaks and Geeks, we were hooked.

* "Hey, I believe in God, man. I've seen him, I've felt his power. He plays drums for Led Zeppelin and his name is John Bonham." (Nick)

* And to one of the best all-time quotes:  "I have to get into a bar. Everything fun in life happens in bars." (Ken)

It's no wonder that this show resonated with us.  It also figures that a show this classic and filled with such a great cast would not last more than one season.  But at least we have that one season to relish, and it doesn't take much reasoning to figure out the episode that we have watched the most...

The punk part of the episode starts out when Daniel Desario (James Franco), Ken Miller (Seth Rogen) and Nick Andopolis (Jason Segel) scope out Jenna Zank (a dropout from their high school working at the local liquor mart).  Zank is sporting a bleached-blond spiked "do," somewhat pineapple-esque.  Nick says, "She used to be so hot", but Desario thinks she's still hot, then Ken observes, "if you like clowns," as she is spotted reading a Slash Fanzine with Darby Crash on the cover. 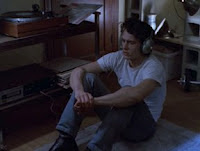 In this episode, we get a look into Desario's life, which is bleak.  The glimpse in this episode into his background shows why he is somewhat of a fuck-up.  Between his mother asking him to skip school or be late to help take care of his dad (having no regard for his education) and his girlfriend Kim Kelly (Busy Phillips) constantly nagging him and calling him a loser, he starts to pull away.  After he picks up some medication for his dad, he then goes to his room and pulls out what appears to be his first punk LP, and it's an excellent choice:  Black Flag, "Damaged" and plays "Rise above"...feeding his angst.

So as soon as Kim breaks up with Daniel again (as he was being distant and they break up every week anyway), he goes back to that liquor store to try to impress the "punk chick".  As they discuss his and Kim's breakup, he quips that part of the reason is that "she's not a punker, I am".  She quickly clarifies, as any proper punk chick would do, "you know what punkers don't do...call themselves punkers".   Desario attempts to redeem himself by stating he listens to The Clash, Iggy, Ramones and Sex Pistols and she confirms:  "all the obvious guys".  He then claims he listens to more obscure stuff, too, so why would he not mention his recent Black Flag purchase to her is a question.

She lets him in on a show at the "Armpit" downtown (obviously the person on the writing staff that came up with that club name was out of ideas).  Prior to him heading to the club, the camera breaks away to show him trying to "punkify" his jacket with his boot and hubcap poundings and then he hits it with the safety pins (a classic staple of the early '80s- I would often wear the safety pins as earrings myself).  As he is listening to X's "Your Phone's Off The Hook, But You're Not"...(another missed mention to Zank), he cuts up his T-shirt and jeans, and then growls at himself in the mirror --his look is not quite complete yet, so he starts in on the egg whites. 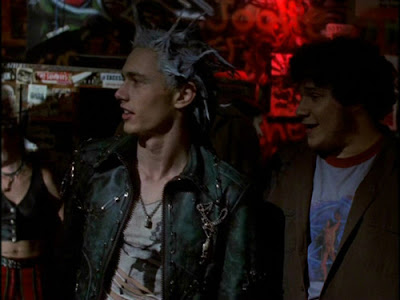 Somehow, the next time we see him, his spiked hair is blue, how did that happen?  -maybe he mixed the egg whites with the ol' Kool-Aid? As he heads to the gig, he picks up Nick and Ken, who promptly start giving him shit.  Ken states:  "Hey Nick, maybe you'll get lucky at the punk club tonight"..."think so?" (Desario)...(Ken again) "sure, all these punk girls hate themselves, that's gotta improve your chances." Ken's just going with what he knows here, which is obviously not much.

Nick asks if he can use him to clean out his ear later, and Ken:  "Edgar Winter called, he said he needs his hair back for a gig tonight"..."we'll see who looks stupid when we get there," counters Desario.
As they arrive at the "Pit," punk band Diesel Boy is playing "Lime Green." Their song "Punk Rock 101"  fittingly plays later.  Desario yells: "man isn't this great!"... Ken:  "Yeah, no one has carded us and I like it" ... "yeah, no rules, we do what we want here"---like Desario knows. 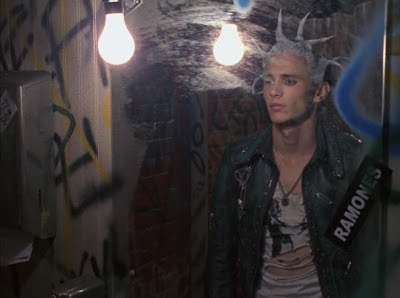 Ken, of course, heads to to the bar as Desario runs into a punk who swigs his beer and spits in the air and he yells "yeaaah," and Desario follows suit.  Nick calls the bartender a bastard and Ken says that he's only serving people with stupid haircuts, so he tells Daniel to go get the drinks-- "bite me" Desario says.  He then spots his punk pineapple honey across the bar.  She does not recognize him and he claims that this is the "real" him when she says he looks different.  He says that "Puss"  rules, referring to the current band onstage and she clarifies that it's "Pus" and they are up next.

Later, Desario, never being in a pit before, gets kicked in the head and starts bleeding --seems he has realized he may be out of his element.  In the bathroom, some real poser wearing a red lightning bolt shirt says to him "man can you believe how many posers are out there?" Desario gets defensive immediately, showing his wound to prove that he is not one of them.  When he gets out of the bathroom, he claims his head is "just another battle scar" to piney queen ---his angst and willingness to prove that he is not a poser causes him to almost get an impromptu piercing, but then pineapple princess starts making out with another guy and he flinches, getting the needle stuck in his nose instead.

He finally gives up and leaves with Nick, but they can't find Ken.  Ken is then seen jamming in the pit...at least he got it.

After his adventure into the punk scene, Daniel then goes back to Kim with his tail between his legs.  With Dean Martin's "You're Nobody Till Somebody Loves You" playing, Desario goes back to Kim where he begrudgingly belongs.

This was also the episode where Neal and his freaky "figure" appeared, and Lindsey's father, Harold, gets drunk.  So when you think about it, there is really something for everyone. 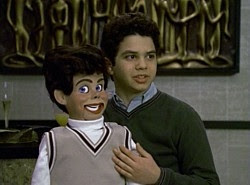