Checking in from Sweden: The Nomads / Interview

When it comes to a garage-fuzz-punk-rock band singing in English with Swedish accents, you can't beat The Nomads.

Even if they weren't from Sweden, they'd still tear it up over tons of other bands in their genre. Bands from all countries need to stay on their toes with The Nomads around.

They kicked it into gear in 1981, taking some cues from The Sonics' stompin' blueprint and have blitzed their way through the years with heaps of rock and melody. They've released 60-plus singles and full-length and mini-albums over the last 30 years, and this year the band weighs in with another stellar long-player, "Solna," a city north of Stockholm.

The album is currently available overseas and can be ordered from www.lamf.biz in the UK.
A U.S. release on Green Mist Records in Philadelphia is planned for October.

* "Solna" is the first Nomads album in 11 years since "Up Tight"… what have you guys been up to for the last decade or so?


* What's the key to putting together new material after such a long break?

We didn't write a single song from 2001-2005. Then Backyard Babies asked Björne and Chips to write a song for their new album. They offered BB "Ain't No King Of Rock 'n' Roll," which they, for some reason, declined. We recorded our own version, Little Steven declared it "the coolest song in the world this week" (on his Underground Garage radio show) and that inspired us to continue writing.


* Do the "Solna" songs rank up there with your other songs from over the years?

We've been getting quite a few people saying that the new songs are just as good as the best of the old ones...and I agree! 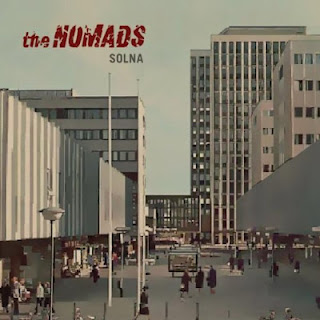 * The Nomads have been together for 30 years -- what keeps things rolling for you guys?

It's not a full-time thing for us anymore, so we enjoy every minute of it.


* You've covered American bands like the Dictators, The Sonics and more … what's special about those American groups?


* Do you have any good Handsome Dick Manitoba stories?

No, but I'm very happy to have been able to play together with HDM and befriend him -- he's fantastic, you can't possibly be more New York than him.


* You've got a song "American Slang" on the new album -- what's some of your favorite American slang words or phrases?


* Since we're from Seattle, and you've recorded here, what are some of your best memories from our area? Who are some of the interesting rockers you met and hung out with here? Favorite places to hang out?

We worked mostly and didn't go out to too many shows. We had a blast at a Young Fresh Fellows New Years Eve show and hung out a lot with those guys, but the very best live experience was actually Jimmy Scott, an amazing old-school crooner, at a very cool old jazz club that I've forgotten the name of. Went there with Kim of the Fastbacks and Ken of the Posies. We played a show at the Crocodile, which was a great place -- is that still there? (Editor's note: Yes, it is. It was remodeled and reopened a few years back.)


* Looking back on your career, what Nomads album really stands the test of time or is your favorite?

"Outburst" from '84 still sounds really cool, I think. "Sonically Speaking" from '91 is great, too, but "Outburst" is our masterpiece.

* What was the experience like writing a song with Peter Case?

"Call Off Your Dogs" had already been written for the Nomads by Peter and Jeffrey Lee Pierce, and Jeffrey had mentioned it to us a couple of times when we ran into each other on the road. For different reasons, we never got to hear it and were becoming frustrated as we were really curious. When Peter Case came to Stockholm in '86, I was determined to get to hear the song. Peter remembered the music, but had completely lost the lyrics, so we started to write some new words backstage after his show. The the record company dragged us away to some night club and we continued writing while drinking and partying, then the whole thing was wrapped up at his hotel room after some room-service drinks orders. I stumbled out of the hotel with a cassette of it at five in the morning!


* In April, you held a record-release party. What was that party like? Were there any hangovers the next day from beer drinking and cheering the release of "Solna"?

You bet! It was great to finally have the damn thing out, felt like we'd been working on it forever.


* What's the best place to eat and drink in Stockholm or the surrounding areas?

Bröderna Olsson's Garlic & Shots is a great place both for eating and drinking. (Where the record-release party was held.)


* What's on the Nomads' upcoming schedule? Any American dates?

We'll see if any offers appear. At the moment, we only have some shows in Sweden and in Spain booked, but I'm sure there will be more during the rest of the year. Check out the Nomads page on FB-- https://www.facebook.com/thenomadsofficial for the latest info.