Andy and I always make it a point to check out the opening bands at shows, especially when we've never heard or seen them before.  That is how we have found much of our favorite music.

Case in point: As we wandered into Club Oasis in San Jose, CA in 1992 with our friend Sean Cooper, we did not know what we were in for.  We had gone there to see the band Come and, of course, got there early to partake of some beverages and check out the opening act. When Holland's Bettie Serveert hit the stage, we were mesmerized.

From their quiet bits to their wall of sound, which comes at you with this celestial voice above it, at the time I kind of thought it was Led Zeppelin-esque with a female singer. I was in...so was Sean, and he immediately purchased a "Palomine" T-shirt as soon as they were done.

Henceforth, two decades later, and they are still one of my favorite bands. To quote the classic line from the movie "Office Space," "I celebrate their entire catalogue." From the haunting "Brain Tag" to the current bouncy, rockin' "Shake-Her," I dig it all and every album has its own feel. But my favorite album will always be "Lamprey." Just as Crass' "Penis Envy" is my go-to record when I am pissed off at the end of the night, Bettie's "Lamprey" is my go-to when I am in a pensive mood. I put on "Keepsake," and it is all good.  I am instantly content...

So having them in our blog was a must, and here is a Q and A via email from Amsterdam with Betties Peter Visser (guitar) and Carol van Dijk (vocals, guitar).


* We first saw you when you toured with Come in 1992. What were some highlights of that tour?

Peter: That must have been our first American tour, I believe. We were all extremely excited.
First half was with Superchunk and in Minneapolis Come joined for the rest of the tour.
Everything was new and overwhelming to us, inexperienced geeks from Holland.
Come was a great band, we've toured with them many times.
We became friends and learned a lot. Chris Brokaw and Thalia Zedek had this guitar weaving-thing that was really inspiring for Carol and me. Also: their shows had something dangerous to them. You never quite knew what could happen.
Bless them!!

Carol: Totally agree with Peter. Funny coincidence… tonight Come will be playing here in Amsterdam with the original line-up and Peter, Herman (Bunskoeke, bassist) and I are very excited to see them again after all these years!

Peter: Again a 4-piece band, kind of wild and fresh, but of course much older.


* What's your favorite Bettie album and why?

Peter: To choose one is to kill your other children.
For me almost every album has some stuff to cherish on it.
"Palomine" was the big kick-off for our career, we still play some songs to this day.
"Log 22" was our "art-school" album. We told ourselves: "What ever we like we can do! No limitations."
And although there might be too many songs on it, or some songs could use some editing: I still have very fond memories of that album and the times it was made.
"Pharmacy Of Love" was the first time working with energetic, hard-hitting drummer Joppe Molenaar.
That meant: Earplugs!! First time recording in La Chapelle Studios in Belgium.
"Oh, Mayhem!" is our last one and I like it because it's fresh, short, snappy and sometimes wild.

Carol: Honestly, I can not choose between them. Every record we’ve made so far has its own story & vibe: they are different adventures or chapters, if you will.
The way I see it is that in the past 22 years we’ve been playing in different bands that all had the same name: Bettie Serveert.


* You straddle the line nicely between soft and heavy (sometimes in the same song, sometimes not), what were some influences in finding your sound(s)?

Peter: Not sure if that's a question for me because I mostly react on bits and pieces that Carol brings to the drawing board.
In general, I guess our influences go from Blondie to Mars Volta and all in between.

Carol: True. There are so many different kinds of music that we love and are influenced by. The one thing that has always been important to us if finding an alternative to whatever is mainstream, that’s why they call our music "alternative rock."


* How has "Oh, Mayhem!" been received so far by fans? How does this album rank for you compared to all the other records?

Carol: So far we’ve had great reviews and we’re really happy about that! After we finish a new album, we never know how people will react. I guess that people who liked "Pharmacy of Love" see an obvious connection to "Oh, Mayhem!" The live set that we’ve been playing the last couple of months is a mixture of those two records plus some all-time favourites, which works really well.


* From earlier songs like "Brain Tag" and "Under the Surface" to new ones like "Shake-Her" and "Had2Byou," where does your lyrical inspiration come from?

Carol: Most of the lyrics are very personal, but they don’t necessarily have to be about my own life. It could be about people around me who are dear to me, for instance. Or writing in the "you-form" could mean that I’m sort of talking to myself.
I hardly ever explain what the songs are about, because I think it’s better when people make up their own mind and connect their own stories to them.
The moment we release a record, the songs take on their own life and we have to let go.


* Music can be a moving experience for listeners, how does playing Bettie songs make you feel?

Peter: I hope that our music covers every aspect of the human emotion.
For me playing Bettie songs can be comforting, it can make me happy, sad, melancholy, aggressive, I can be moved by it, it can be funny, irritating, joyful.

Carol: Playing live shows is a very emotional thing for us, because the songs are emotional. We interact and feed on each others' playing, as well.
People have asked me why I often close my eyes while singing… well, it’s because a lot of the time I can see the "story" behind the lyrics like a movie playing in my mind. As if it was projected on the inside of my eyelids.


* What were your aspirations when starting the band? How do you feel about everything looking back... and moving ahead?

Carol: We were just a bunch of close friends who loved writing & playing songs together: no goals, no plans, no real ambition other than having fun & pleasing ourselves. Within 8 months after we started, the whole thing exploded and we were signed to Matador and started touring all over the globe. It was like being inside a hurricane!
We never expected people to like our music and were very surprised about all the commotion.
The first thing we had to learn was to be "a band on tour." Not every musician is made to be on tour: a lot of them get homesick and are not accustomed to the chaotic lifestyle, eating & sleeping at random hours. But for Herman, Peter and I, it’s always been and still is one of our favourite parts of being in a band!

Carol: We split up, because at the time Peter and Herman were playing in De Artsen and they were starting to get noticed. I was their live sound-mixer and a HUGE fan of their music, so it made sense to focus on their band.
Plus our first drummer (not Berend Dubbe) left the band to become a steward for some airline company (I kid you not).
Our sound was quite different back then and guess what?: Peter also sang some of the songs! We still have recordings of them, but Peter doesn’t want other people to hear them…


* What's life like in the Amsterdam area? What do you all do when you're not playing music?

Carol: We’ve been living in Amsterdam for more than 25 years now, and like most people here, we have a love-hate relationship with the city, but I wouldn’t want to live anywhere else! Most of the time it’s quite relaxed. We have rent-controlled apartments for people who don’t have a big income, some nice venues for bands to play and great restaurants that are affordable.
Speaking of restaurants, Herman is a chef cook when he’s not playing with the Betties!
Peter and I do most of the management and also run our own record label Palomine Records, when we’re not writing or recording new songs.
I still love riding my bike through the inner city, the old parts of Amsterdam, watching all the impressive historic buildings.

* Have you ever met Bettie Stöve (a former Dutch tennis player)? She had great success on the tennis circuit, are you fans of her tennis playing?

Peter: Never met her, but she knows about the band. When we played Pinkpop (biggest festival in Holland) in 1993, she sent us a telegram.
Neither of us plays tennis. Bettie Serveert was just a funny name for a band, we thought. 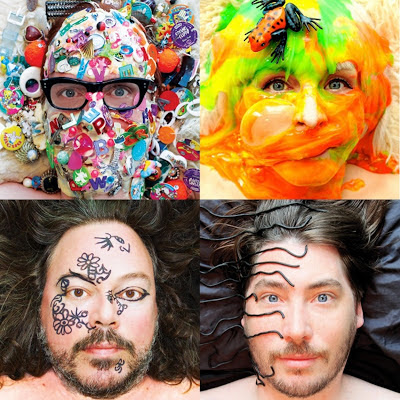 * What's next for the band, lots of touring, possibly the US? How was the recent string of shows?

Carol: We just did a 3-months tour in the Netherlands, about 26 shows, which was awesome. There are some other shows booked for later this year and we might do some festivals or do some shows in Great Britain and Germany.
But in the meantime we’ve started writing new songs: we played one of them last Friday and people seemed to enjoy it, so that’s very encouraging!

We would love to play in the US again, but since 2009 the work visas have become so expensive that it’s almost impossible for a small band like ours to come up with that kind of money. We don’t have tour-support: we pay for everything ourselves.
On the other hand, we can’t tour without a work visa, because we will be kicked out of the country the moment we go through customs.
Most people don’t know this (because most bands won’t say it out loud), but it takes ± 5 months to apply for a US work visa and $4,000… and it’s non-refundable when you get denied (which almost happened to us in 2010).
In comparison: a Canadian work visa would take about 2 weeks and $400. American bands who tour in Europe don’t have to go through that kind of trouble, either.
In my honest opinion, I don’t think it’s fair.

So let’s hope for small miracles and maybe one day we’ll be able to do another US tour!