The Derelicts bash out new album, 'Life of Strife' 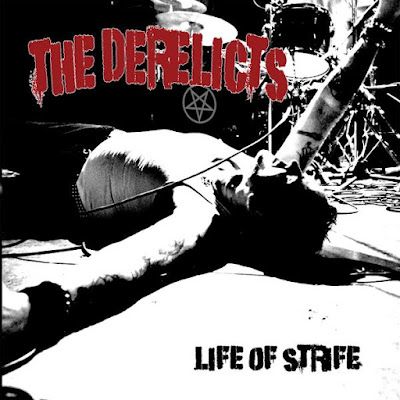 Who let these guys back in the studio?

Apparently a 25-year moratorium is satisfactory, and along with producer Jack Endino, The Derelicts entered the Soundhouse in Seattle last year. They return to the punk-rock fray with a new 15-song platter, "Life of Strife," which hand-grenaded into stores today courtesy of Digital Warfare Records.

The album features five new songs and 10 Derelicts oldies to rip your face off. First-aid kits should be within arm's reach of all listeners.

When the band reunited to play the Highline in 2014, someone chucked an empty beer can on stage before the first chord rang out. Singer Duane Bodenheimer glanced at the Rainier tall-boy as it skipped by him and rattled against the bass drum. He smiled, shook his head and stared into the crowd before the band let loose.

"It was surreal, very surreal... awesome, though," Bodenheimer said of the set in a post-gig interview for this blog. "Just being on stage with those guys and we're all fucking still alive, cuz we've all been through a lot of hard stuff -- and we're still alive. I'm real grateful for that."

He added: "One of the first bands I ever saw was GBH, and I was like, 'I wanna be in a fucking band'... just started doing it. (There's) a lot of anger and hate, angst and childhood bullshit coming out. Most of my lyrics are just about real personal things."

Guitarist Neil Rogers said he felt like he'd been waiting his whole life to return to the stage with The Derelicts at that Highline gig.

The axeman discussed the band's sound: "Basically, where we come from is real American old-school punk rock. A little bit of faster hardcore, but I like to play a blues-based, punk-rock guitar."

The band is rounded out by Jason Freeman on bass and backing vocals and Donny Paycheck on drums.

Here's a link to the release:
https://zekeyou.myshopify.com/collections/the-derelicts/products/life-of-strife-lp?fbclid=IwAR2rVsZL7oJ88hGMEaIce_bnPMhz0RtOWnz2DlEigmPr4GAr7_X1uZtshIo
Posted by Andy and Cat Rose at 11:03 AM