Carrie Akre shares her musical journey: Goodness, Hammerbox and beyond

Whether she's chatting with her 5-year-old son about his Mario Brothers figures, remembering singing along to a Barbra Streisand record when she was a child or discussing the art of belting out her band's songs on stage while simultaneously gasping for air, Akre is a merriment machine.

Akre, 47, also possesses the powerful, soulful and soaring voice for the band Goodness, which performed a stellar set on Saturday night at Neumos in Seattle. The group played its first gig since 2009, a hometown show that celebrated club Moe 20th/Neumos 10th anniversary weekend along with sets by The Posies, Alcohol Funnycar, Truly, Faster Tiger, Lucky Me and more.

I spoke with Akre by phone from her home in Minneapolis on Jan. 3 and here's what she had to say about returning to the stage with Goodness:

"I have such a bigger appreciation for it: Having someone who wants to see you play. But just as a person, getting the opportunity to get on stage and sweat and yell and run around ... That does not happen ever in my day -- never -- and I miss that, being able to express yourself that way. It feels really good. I'm really looking forward to it -- I wanna sweat, I wanna break down (laughs), I wanna sing well, I wanna connect with people. That's such a fantastic experience. It sets you free.

"Just gotta find the right dress, man. And that's no joke -- even from Hammerbox days, people (ask), 'Do you get nervous?' I'm like, 'The only thing I usually get nervous about is what the hell am I wearing?' And that is so girl, but it is so true."

All of the above rang true on Saturday. Akre held her own and would have made one of her early idols Pat Benatar proud. 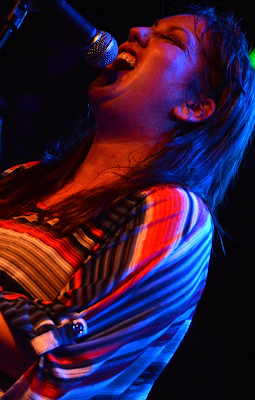 A SHOT OF BENATAR

When she was 14, Akre attended her first concert, a Benatar affair at the Seattle Coliseum. Already a choir singer at the time, Akre was fascinated and passionate about vocal range, and she was mesmerized with Benatar when she took the stage.

"I thought her voice was amazing. Especially when you learn the difference between head voice, chest voice ... you know, her growling and all of that, too -- that's a BIG voice. And I loved her," she said. "I just thought Pat Benatar was bad-ass... she is bad-ass. She had her black cat suit on with a red corset thing and she's strutting around -- she had this strut, right? Where she'd always hold her wireless mic and (act) like, 'I will fuck you up' (laughs). But it was so sexy and powerful and cool looking to me."

As a teenager, Akre also dug the voices of Debbie Harry, Chrissie Hynde, Elizabeth Fraser of the Cocteau Twins, Kate Bush and Alison Moyet. Other notable concerts she attended during this time were The Police, Van Halen, Duran Duran, Thompson Twins and The Fixx, whom she saw five times.

She listened to her favorite singers and let the music take her away. She never thought about being in a band because she didn't think her voice would fit into the hardcore punk scene that she knew of from her brother, Eric, who played drums in those types of bands.

Her time on the Seattle music circuit would come later with Hammerbox. 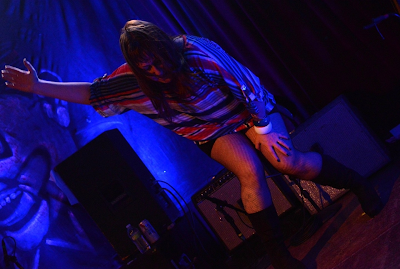 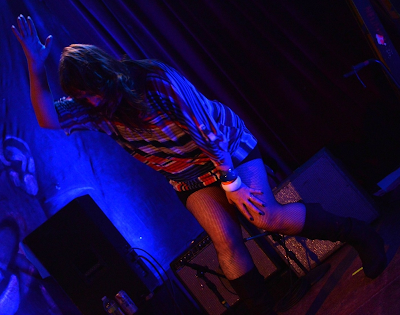 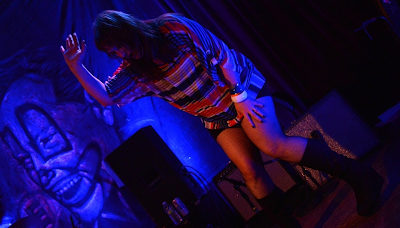 Akre began developing her voice in junior high choir with the guidance of her teacher, Mrs. Woolridge, a passionate woman who created an exciting music atmosphere that had her students striving for excellence.

"She had us do training. She had you really think about what can you do with that voice of yours? 'Here's what we can get out of it' or 'here's how you sing this song.' A lot of choir parts can be really difficult: it's breath, it's tone, it's projecting, it's how do you make those notes and how do you come up and high and down and all over the place?," Akre said.

Akre's choirs attended competitions and combined forces with other choirs, creating a pack of voices 500 strong.

"It was powerful to be standing there amongst that many people," she said.

It wasn't just singing that drew Akre's interest to music, it was also the paths that others took to find their sacred musical places.

"There were festivals where certain teachers would come who had amazing histories, and so you've got to partake in that. I've always really liked a good, passionate education around anything, be that history or anything, so if you get a teacher who's really like, 'Here's why this is amazing and you can do this' or gets you really excited about crafts, I just respond really well to that," she said. 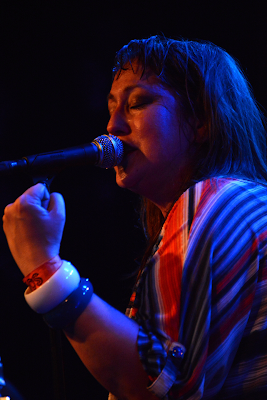 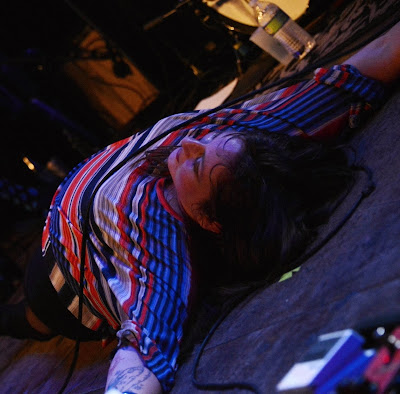 Fast-forward to 1989 and Akre had returned to Seattle from a one-year stay in France as a nanny. She studied French at the University of Washington and embarked on one of the hardest personal journeys at that juncture of her life.

"When I got back, I thought, 'OK, if you can do that, you should think about anything you wanted to,'" she said.

Join her first band, of course.

She answered an ad that Atkins and Bosch placed in a local music paper (Annie Lennox and REM were some of their influences that she shared), met up with them at their house in Greenwood, entered their small practice space and went for it.

"I find ignorance is bliss in that situation because you don't have anything to compare it to. You're on a completely new journey and it makes you kind of free, so you're just tackling everything one at a time," she said of responding to her first ad and moving forward.

The boys played and she sang.... "And there was really no turning back. I'd never done anything like that, so I'm like, 'OK, I'm just gonna open my mouth and let's just see what happens.' Luckily, I think that I have enough of a pop sensibility from just loving listening to music for so long that I very quickly could hear, 'OK what are you playing? What is that conjuring to me? This is what I'll sing,'" she added.

Atkins and Bosch called Akre back a day later: she was in, but now they needed a guitarist.

A firm believer in synchronicity, Akre heard about Thurmond from some music friends, the talented axeman rolled into town from Eugene, Ore., the foursome made an "awesome connection" and Hammerbox was born.

"It was intense, more driving music. It was darker, and so angry. I'm like, 'I'm not an angry person,' but all that music is so (angry), which is maybe what it needed to be because it was a really fast train ride," she said.

Hammerbox offered up two albums during its five-year run, one on C/Z Records and another on A&M Records.

"We were determined to be good and were slightly competitive in a good way, smart, build your audience. We worked hard at writing good music, and I think it was unusual to have a strong voice female lead," she said.

Akre revisited her Hammerbox song "When 3 is 2" at Neumos, sharing vocals with These Streets, a band from the rock ‘n roll story that is inspired by women musicians in Seattle during the early '90s.

Next up for Akre was Goodness, a melodic, rocking unit that hit the scene in 1994 and released three records -- two on indie labels and one on Immortal/Epic -- before disbanding after four years together.

"I think making the first record was such a great time because everything's new and you're creating your own music for the first time or trying to figure out what that sound is," she said. "You really have a limitless idea of anything goes, and that's such a comfortable place to be. For me, I was writing songs for the first time, trying different vocal approaches, working with all new people and that's such an exciting time."

Live highlights were opening for Pearl Jam and Oasis and joining Candlebox on a two-month U.S. tour.

"Those (Candlebox) guys were very kind to us. That was a fairly grueling tour in terms of their audience is pretty macho, so there were some struggles there, for me. You had audiences that were just aggro, angry, unfriendly in certain places," she recalled.

At one club in Dallas, Akre -- who was sporting a slip and combat boots -- encountered three belligerent, name-calling guys at the front of the stage. She said it was a harsh, scary and bizarre experience of "blind ignorant rage," but there were also Goodness fans in the room who apologized for the trio's actions.

She remembers thinking: 'If every show's gonna be like that, that's not what I signed up for. I'm not gonna win any feminist battles out here in the macho row.'"

"That night actually turned out amazing," Akre continued ... when Candlebox singer Kevin Martin turned the tables on the hate-filled trio at the start of his band's set.

Martin scolded them for their treatment of Akre, who came out and sang with him on one song. Even though she knew it was immature, she came on stage, flipped the guys off and tossed out a sneering "fuck you!"

Akre said she was glad to face her foes again that night.

"I feel like it was extremely cathartic. And that's the thing about being in music, too, is you kind of gotta love a little bit of that crazy and conquering. You gotta love it as your experience and your war stories. You gotta put it somewhere in your heart," she said. 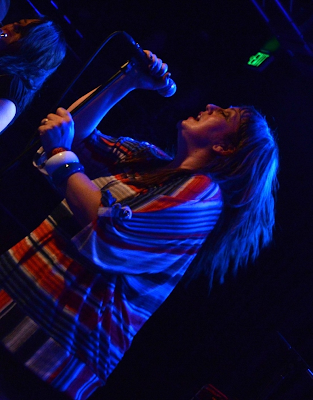 Akre, who has been living in Minneapolis with her husband, Martin Lund, and son for about three years, still sings, writes songs on acoustic guitar and has performed a few solo shows in cafes around town.

"This year, I've really come to an epiphany of it's time to recommit to doing music, and so this will be the year that I try and write more and record  -- cross your fingers," Akre said, noting that she hopes to build a live band with her bassist husband and others in Minneapolis, where she landed a project manager job. They've grown to love the area's culture and landscape, which is similar to Seattle... but much colder.

So Akre -- who has three solo albums under her belt -- has guitar and vocals covered, Lund's the bass man ... what about their son?

In between laughs, Akre said when she plays around her son, he often interrupts her by touching the guitar.

When she sings around the house, he's like, "'Shhh, Mamma,' because you know, cuz it's really about him," she said. "But I'll find him singing, as well, and I really love that." 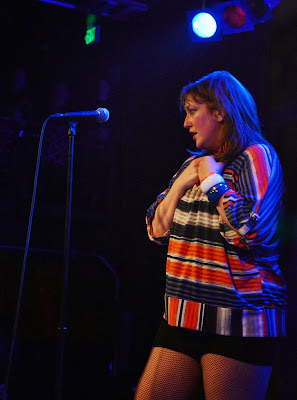