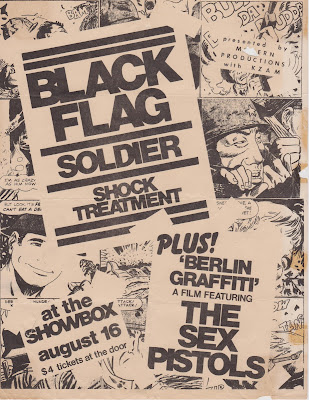 My first Black Flag flier -- minus the iconic bars -- was by way of Seattle.

Back in the 1970s-through '80, my family packed up our brown-and-white Dodge van (and later, our striking lime-green VW van) during the summer and hit the road from Redondo Beach, Calif., to Port Gamble, Wash., to visit my dad's parents in this small logging town on the Kitsap Peninsula. It's where he grew up with Vern and Catherine and my aunt Carol, whose family we always visited in San Jose and Morgan Hill (Calif.) along the way to the Pacific Northwest.

We often made our way into the big city -- Seattle -- to see the sights, visit friends and attend Seattle Sounders and Seattle Mariners soccer and baseball contests.

One day in August 1980, my brother Ed and I spotted a Black Flag flier on a telephone pole near the Seattle waterfront. We also scored a few bucks while waiting for my parents to finish shopping when a couple asked us to watch their luggage while they milled about. Apparently, we looked trustworthy: me with long, surfer-meets-Joey Ramone hair and my brother with a shaggy hairdo and probably sporting an OP T-shirt.

We took the dough when the couple returned to retrieve their bags and then ripped the Black Flag flier off the pole (we had spotted Flag fliers glued to walls and poles near our home, but had never procured one). We then discussed how cool the gig would be a week or so later with Soldier (should have been spelled Solger), Shock Treatment and the Sex Pistols film. We didn't attend, but when we returned home to Redondo, we saw more of those classic fliers, grabbed the "Nervous Breakdown" and "Jealous Again" records and were soon regularly attending gigs by Flag, Circle Jerks, TSOL and many more.

Other Seattle punk trinkets that soon found their way into my collection were a Rejectors EP and an Accused demo tape, both sent to me by the bands. Included here is a letter from guitarist Tom Niemeyer and the Rejectors EP cover. 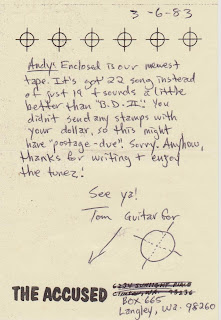 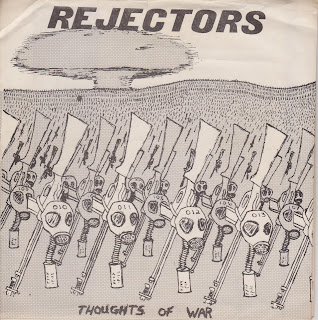 After moving to Seattle 14 years ago, Cat and I have attended many gigs at the Showbox, including X twice, the Knitters, Seaweed and more. The Damned are coming to the venue next month and we'll be there.

As for the green VW van, it caught on fire while my mom was driving it one day. This Black Flag flier, however, has stood the test of time.