If the punk T-shirt still fits, proudly sport it! 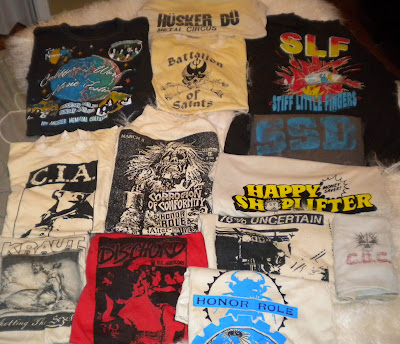 Ah, band T-shirts. Everyone's always got some interesting stories to tell about where and when they got them, how they ripped a sleeve while stage diving, met their significant other who happened to like the same band and gave them a wink, or the mysterious stain that either came from a food dropping or the remnants of a night of too much drinking -- stuff like that.

Here's a few of my T-shirt tales:

SSD (or Society System Decontrol)-- Guitarist Mr. Al "Lethal" Barile sold me this shirt at an Olympic Auditorium gig in Los Angeles in 1984, and it's probably the one that I've worn the most over the years. It's a bit tattered -- much like SSD's grinding, manic sound -- but I can still wear it. SSD went from blazing hardcore to metal over the short course of its career, but the music -- all of it -- is solid and stands the test of time, just like this iconic shirt.

Stiff Little Fingers-- This has to be the goofiest T-shirt ever created, but I had to buy one at the reunion gigs in Los Angeles in 1988. I proudly wore this one for many years (it still barely fits), but couldn't help feeling a bit like a comic-book nerd each time out. Once at a Social D gig at One Step Beyond in Santa Clara, Calif., not long after those SLF reunion gigs, some guy was stoked on the shirt I was wearing and we got into an SLF discussion, which was a rarity then because they had been a forgotten band since their '83 breakup. 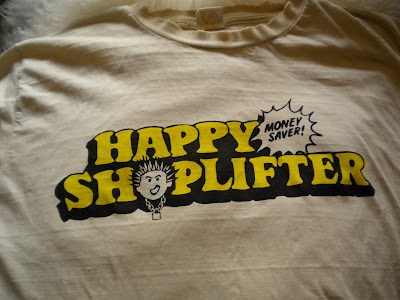 Happy Shoplifter-- (Not a band T-shirt, but so what?)

Carrie and I snagged this one at a music festival/fair in Hackney (London borough), during our spring '93 trip. Fucking funniest shirt ever, and I still get weird looks whenever I wear it today (especially in stores!). There's a chain of stores there called Happy Shopper, hence the spoof T-shirt. And the punk guy? Classic.

Husker Du-- "Metal Circus," a scorching album, and this once-tie-dyed T-shirt complemented that record perfectly. I wore out the grooves on that platter much like this shirt went through the wringer back in the day. This and my "Candy Apple Grey" T were my calling cards for a long time... wore 'em till they almost fell apart. (Insert Husker album reference here.)

76% Uncertain/CIA-- "So does that mean you're 24% certain?" Yep, heard that one a few times when wearing this one from these Bridgeport, Conn., punkers. The CIA shirt raised some eyebrows, as well... once from a cop. Some great shirts, some killer tunes from both bands. 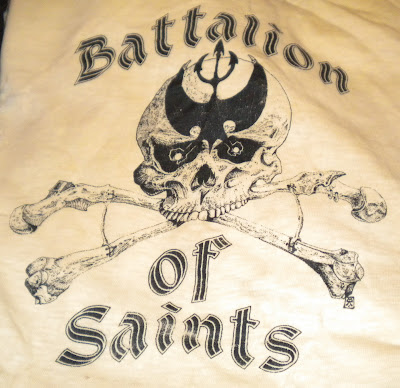 Battalion of Saints-- High-school yearbook picture time for my journalism class? Why, of course, wear this BAT's shirt under my button-up shirt and unbutton just in time for the flash to go off. A classic shot, an unbeatable band. Received this shirt from the band in 1983 when they were hanging out at KXLU radio at Loyola Marymount University (Westchester, Calif.) for an interview/drinking session. Always cool guys... great musicians. This shirt has been reissued, but it can't tell the stories that mine can.

Corrosion of Conformity-- This is a rarity, for sure, given to me by the band during my Raleigh, NC, trip in '86. Found this one while scouring the attic of drummer Reed's dad's office one day for COC stuff. Not long after, I was on board with the crew for gigs in Albany, NY; NYC; Boston; and New Haven, Conn. Honor Role and Alter-Natives ... some pretty cool bands, too.

**And, yes, the other COC bit with the spiky skull are some old boxer shorts!

(Misfits-- I've got an "Evilive" shirt somewhere, and a funny story to tell about one kid -- not me -- who got that same shirt plus a few others at one gig. After he entered the door to some hall in a sketchy area of Los Angeles to see the Misfits in 1983, he bought 5-6 shirts and put them all on at once. That guy must have been sweating it up big time when the Misfits finally hit the stage and tore through their set, after three opening bands. But he had more shirts than anyone that night, so that's something to brag about, I guess.)