That was one of the memorable chants we heard on May 20, 1993 at Wembley Stadium in London during an Arsenal vs. Sheffield Wednesday FA Cup Final replay. And what a great chant it was: the Arsenal crowd, with fists raised, were yelling this at the Wednesday lot. Men, women, even one grandma and her grandchild participated. Just perfect.

Although we had been soccer fans forever, we became Arsenal FC supporters that evening during the Gunners' 2-1 overtime victory.


Our hearts are still with Arsenal (even though it's been a tough go in recent times). But when the MLS first started, we were in San Jose, CA, and The Clash was our team. How fitting that our team was named after an iconic punk band.

Back then, we had nothing on the singing and chanting that takes place in England, but there was a small section that we sat near that deemed themselves (suitably) "The Casbah," who did what they could to rally the crowd. Andy and I would also yell and cuss -- including one time I screamed at Eric Wynalda (who was on our team) "Come on and shoot you pretty boy!" As the crowds only averaged about 8,000 -10,000 or so back then, and we sat near the field, I'm pretty sure he heard me (and he did shoot right after that finally and scored). We remember some of the songs and chants of The Casbah included "It's A Small Field After All..." "We Are The Casbah" and "You're Not Keller!" (which we would shout at Tony Meola when he was on the field with the NY/NJ Metrostars at the time. We yelled that because Kasey Keller and Meola were both goalies of the US Soccer Team at the time and Keller was way better, of course!). 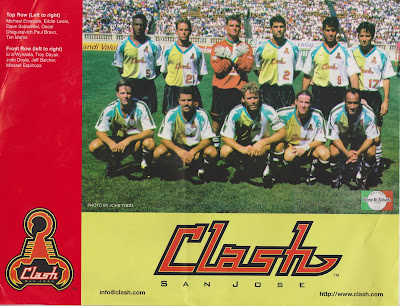 When we moved to Seattle in '97, we were going to miss our season tickets. Not long after that, The Clash moved to Houston and a new San Jose Earthquakes team started later. We were then twice removed. After all that, we had pretty much lost track of our team -- and we had a hole where our MLS team used to be...
Then, when they blew up the Kingdome and we heard promises of an MLS team here, we could not wait. And the Seattle Sounders FC did not disappoint -- especially when we found out Keller would be our goalie! The first Sounders match and preceding parade blew away all our expectations. This was as close to the action at Wembley that we had experienced in the US and it seems to get stronger every year -- we average a league-leading 36,000-plus fans each home match. We were finally at home to be able to scream and cuss and sing and chant at the top of our lungs with no one looking at us sideways (as they did in San Jose back then, as that small crowd just did not get it as we do here). We had no choice but to become Sounders fans through and through. (Actually, Andy was a Sounders fan back in the old NASL days, and at the end of this story is a ticket stub from our collection.)


And, in the spirit of this blog, we've got some punk-rock singing action going on at Sounders games that make things just right. Kudos to the throng of Emerald City Supporters for bringing bits of Cock Sparrer's "Take 'em All" and Sick of it All's "Us vs. Them" to life and getting thousands of fans rocking out to these tunes that many of them have probably never heard before.

The chorus to Condemned 84's "We're Gonna Win (Euro '96)" or a few Business soccer songs -- just change Maradona's name to MLS foes, for instance -- would do the trick, too. (Although opposing fans could have a field day with "Southgate (Euro '96)" and switch the "Dance now, whatever you will be, but he missed the fuckin' penalty" part on us because of our club's recent PK woes.) 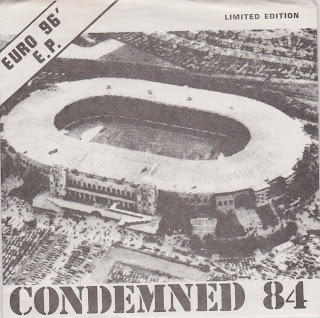 Along with the above and a host of inspirational songs like "The Blue and the Green" and "Sounders 'til I Die," we can now yell "You dirty northern bastards" ourselves (especially at Vancouver), "you suck asshole" (at the visiting goalie) and "let him die!" (when the opposing team's player gets hurt) without trepidation.

Thank you Seattle for allowing us to proudly let our freak soccer flag fly! 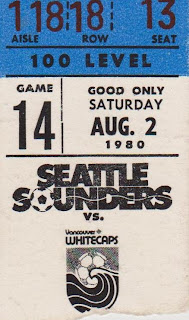