Muralist Don Rockwell is a big Jimi Hendrix fan, and his painting of the legendary lefty axeman at Silver Platters in Seattle is a stunner.

The Hendrix portrait is just one element among copious Rockwell pieces of Pacific Northwest musicians that are emblazoned on a large inside wall of the music and movies store's SoDo location. The musicians span many decades and we at There's Something Hard in There were especially drawn to the likes of The Sonics, Hendrix, Heart, The Fartz, The Gits, Fastbacks, Wipers, Soundgarden and more. 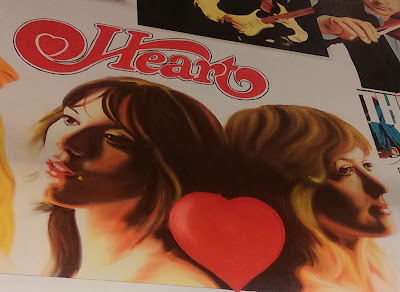 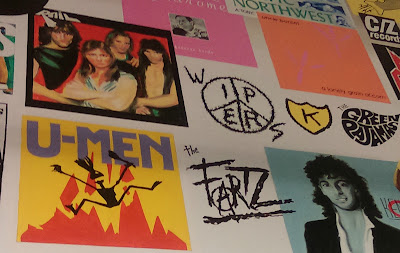 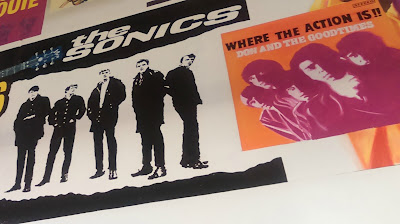 Silver Platters owner Mike Batt provided the layout for Rockwell and he worked on the one-year project throughout 2013. Rockwell, who said he wasn't familiar with many of the artists (for instance, The Fartz), delivered big time by bringing their essence and band logos to life.

"I'm proud of a lot of it," he said over the phone today. "But I'm never satisfied with my own work," noting that some shadows weren't deep enough in spots.

The 59-year-old Shoreline resident began his career in the sign trade in 1974 and has been painting murals since 2005. The hand lettering, carving, gold leaf and cartooning in the sign biz paved the way for his mural work.

"I was very excited whenever I discovered something new about color, light and shadow. It's a lifelong lesson and I put my heart and soul into every opportunity I get to paint," he said in his bio. 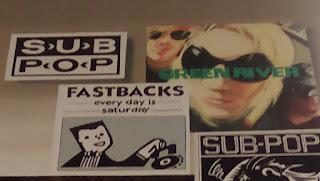 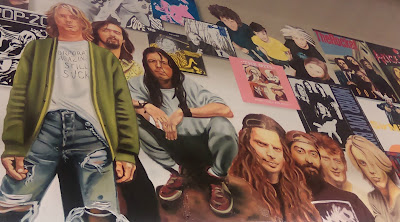 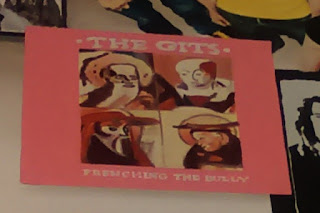 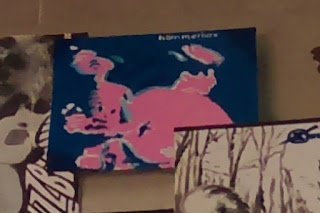 Silver Platters' site is at www.silverplatters.com.
Posted by Andy and Cat Rose at 4:28 PM 2 comments:

Bob Mould is flying solo electric lately and he'll continue along that path for at least a little while longer on his Patch the Sky Spring 2017 jaunt. He tore through career-spanning sets Feb. 9-10 at the City Winery in New York.

He'll next appear at the Wire Drill festival, which will take place March 30-April 2 at The Echo and Echoplex in Los Angeles.

Then in April time, Mould will add some gigs, including a hat trick at the Turf Club in Saint Paul, MN. Two of the dates are sold out:

To get you primed, here's Mould's setlists from the recent New York gigs, courtesy of the Husker Du Database:

Love Is All Around
Makes No Sense At All

Hoover Dam
Your Favorite Thing
The End Of Things
See A Little Light
I Apologize
The War
The Descent
You Say You
Up In The Air
Voices In My Head
Hold On
If I Can't Change Your Mind
Hey Mr. Grey
Hardly Getting Over It
Too Far Down
Pray For Rain
Tomorrow Morning
Chartered Trips
In A Free Land
Daddy's Favorite
Black Confetti

Love Is All Around
Celebrated Summer
Posted by Andy and Cat Rose at 7:47 AM No comments:

Get on it, folks.

--- What inspires you musically to keep doing this for 38 years?

Ha, ha! You know what's funny is the really base-level, crude answer is one time I asked Keith (Morris) the exact same question, and he just goes, 'Well, Billy, what the fuck else am I gonna do?' (in a spot-on Morris impersonation). And I thought it was so genius, because was being very honest: this is all that I know, this is my life.

With me, I definitely wouldn't phrase it that way, but it's kind of like I have a triple Ph.D. in music, if you will, and so it seems it has proven to be the thing that I excel at and so, as long as I remain enthused, which I very much am, then I have no reason to stop or to question how long I've been doing it. As long as I wake up and wanna hear those Marshall (amps) in my face, which I totally do, as long as that's happening, I can still  play in the Descendents. But maybe I'll wake up one day and it'll be like, 'Hey, man, I'm gonna play drums with brushes and I'm gonna be in a little jazz band and play at the fancy restaurant here in town on Friday.' Who knows?

Ace smokes through KISS and solo tunes in Seattle

As a KISS fanatic in 1978, I was faced with a serious conundrum. I know I wasn't the only KISS Army card-carrying member who was in this predicament, but it seemed liked the weight of the world was on my scrawny 11-year-old shoulders.

While staring at the rows of new releases on Sept. 18 at Music Plus in Hermosa Beach, CA, I had a brutal choice on my rock n' roll plate: Ace, Gene, Paul or Peter? As in which solo album would I purchase with my allowance cash from mowing the family lawn, taking out the trash, etc. I could only afford one of those albums at the time... goddammit, which one would travel home with me?

I scratched my head and went with Ace since he was my favorite band member because he seemed like the most wacky and original of the bunch, plus his riveting guitaristry blew my mind each time I cranked my albums. While walking toward the cashier, an older friend of mine from the baseball diamond spied my Ace album and asked why I didn't grab Gene's. C'mon man, you're making this even harder for me now! But I went with Ace's and it would soon be spinning on my turntable as I grabbed my tennis racket to play some stunning guitar along with my favorite tune "Rip it Out" and the other gems. (I never got the other solo albums, but I did grab Gene's "Radioactive" single, which is awesome.)

I heard from a school pal whose family had the subscription ON TV that he saw a KISS concert on there and was mesmerized by Ace's smoking guitar. I'd seen photos but never caught a clip of the action. Another buddy had actually seen KISS and showed me his photos from the nosebleed seats since I needed proof. I was fucking jealous, of course.

Although I never caught KISS in their heyday, Cat and I along with our friends Linda and Kevin witnessed the original quartet at a glorious concert in San Jose on their reunion tour in 1996. We were a few sections up from the floor on Ace's side of the stage and I was stoked beyond belief to see my main man, The Spaceman, display his guitar wizardry in the flesh. 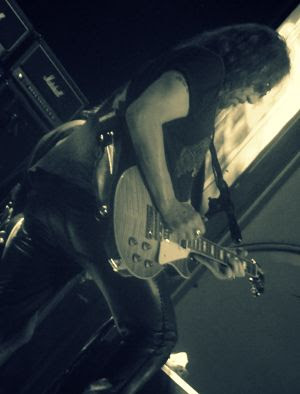 So, where does this all take me now?

Well, last night Cat and I along with our KISS aficionado friends Gregg, Andrea and Mark who roadtripped it to Seattle from Portland entered Ace land at the Neptune Theatre. Mr. Frehley and his band wailed through my old fave "Rip it Out," plus ragers like "Shock Me," "Rocket Ride," "Parasite," "Cold Gin," "Love Gun," "Deuce," "Detroit Rock City" and much more. Pearl Jam's Mike McCready joined the fray onstage to supply some axework to "Cold Gin" (video clip below).

And yes, there was some smoking guitar action -- right in my face -- as witnessed in the video in this entry. There was flashing guitar as well during "New York Groove" and blistering leads galore, of course.

Ace can still bring it hard, man, and yeah, that solo album still holds up after all these years.

Posted by Andy and Cat Rose at 4:43 PM No comments: