By Andy
Gene October gripped the microphone so tightly it was as if he would snap the helpless but crucial object into bits. With beads of sweat dripping down his scowling face, the gutsy Chelsea frontman spit out his lyrics as if they were written specifically for the fans raging in front of him.
As the vocalist leaned into the crowd at Seattle's DV8 in the summer of 1999 on the Social Chaos tour, we were hanging onto every word that shot forth from his mouth -- and his soul. The songs that once blasted through my bedroom speakers in the early 1980s were finally searing through my ears in a live setting. The 15-year-old punk inside of me was bursting through my now adult body. It was fucking worth the wait.
Leaping into the present -- but also giving a major nod to the band's past -- October and his mates have a stellar 2021 album, "Meanwhile Gardens," on their hands and have dug back into their vault and are primed to unleash a new in-studio live recording of the classic album, "Evacuate," that first stoked us in 1982. We're on fire all over again.
In separate phoners with October and guitarist Nic Austin earlier this month, the duo spoke from England about the two albums, the band's longevity and life during the pandemic.
Starting with "Meanwhile Gardens," October -- who formed the band in 1976 in London -- said they wrote and recorded the 13 tracks during the COVID-19 lockdown. There were no gigs to play because venues were shuttered, so the lads found windows of opportunity to enter the studio and bring October's dream of days past to life.
Austin -- who joined the band in 1982 -- said they had luck on their side while working diligently during difficult circumstances, and it was a minor miracle they pulled it off during lockdowns. The Kickstarter album features some longtime supporters singing backup vocals and was a trip down memory lane for all involved. Austin has received favorable feedback from those he's spoken to about the album and is thrilled that people remain interested in what they're bringing to the punk table. In the writing realm, Austin penned three tracks, October wrote three, bassist Mat Sargent wrote one, and Austin and Sargent paired up on six.
'MEANWHILE GARDENS'
We'll let October kick things off with his description of "Meanwhile Gardens":
"I had this idea of going back to Meanwhile Gardens. In my sleep, I had a dream about it. It's an area off Portobello Road in west London, a community area where there was a stage and people just used to turn up, plug in and go for it. You never knew who was gonna play and you used to go, 'Who's that band?' or whatever," he said while taking the first steps on his journey back in time. "We're looking at say '75, '76, '77 era, where you'd get all kinds of bands. You'd get the Here and Now, the Gong, sort of like a lot of reggae acts 'cause there was a lot of dread guys in that area. You'd get the 101'ers, pre-Clash. The Boys. Everybody just turning up, just trying their stuff out, all rehearsing their band for free. A space where they could do a gig or just have a go. On a Saturday afternoon, it was where everybody hung out anyway, Portobello Road. It was a very bohemian atmosphere, sort of like Greenwich Village in New York, where loads of artists, musicians and all kinds of people went down there, it was very popular. Lot of bars down there where you could just start at one end of the road (chuckles) and then down the other end of the road 10 bars later... and end up at Meanwhile Gardens with a couple of cans in your hand and just sit there."
Chelsea never played the gardens, but October became acquainted with his early band members Tony James and Billy Idol there. It was the place to be if you were into the music scene.
"That area was where music people liked to hang around, and if they looked good, you used to stop them and go, 'Hey, can you play?' And then you were lucky enough to, 'Yeah, I'm a bass player' or whatever. There were a lot of people in them days wanted to do it, so they couldn't really play, but they said, 'Yeah.' And they played later (laughs)," October added.
October feels the catchy title track would find a home on American college radio stations. On the whole, the stellar album features two songs, "World Wide Domination" and "Here and Now," that namecheck bands from his Meanwhile Gardens days, and "Ladbroke Grove" is a street where he resided on for seven years. Along with soaking up the tunes, October reminisced about bumping into Joe Strummer or Paul Simonon in a Portobello Road bar playing pool or downing some drinks during those halcyon Saturdays.
It's Austin's turn to dig into the latest album in Chelsea's treasure chest of punk gems:
"The song 'Meanwhile Gardens' is just about sort of going somewhere where you feel like you belong," he began.
"The idea was that it was gonna be our last studio album as such. So we went to a lot of time and trouble kind of writing all the material. I think we're all very pleased with how it came out. It just sort of tells a bit of a story about the times and just the energy and how everyone felt at the time. It's sort of a romantic kind of look back at the times, 'cause times have changed dramatically now and the line in 'Meanwhile Gardens,' 'Take me back to Meanwhile Gardens,' it's sort of take me back to where it all made sense (laughs)."
The album was recorded during chaotic, uncertain times, and Chelsea was trying to deliver something positive out of the situation. "I think it helped us and hopefully everyone that hears it might help them a bit," Austin added. 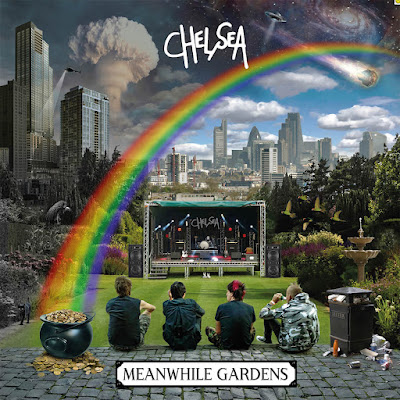 Posted by Andy and Cat Rose at 6:28 PM No comments: