Since gigs have been a bust for nearly a year, we're digging into the TSHIT archives for mostly unseen Cat Rose photos of this blockbuster bill from 2019 in Seattle. #wemissshows

How many screamers can you take ramming their lyrics into your face in one night?

That was the scene at El Corazon in Seattle on Oct. 23 when Eyehategod, Negative Approach, Sheer Terror, Final Conflict, Accused A.D. and Heiress invaded the stage and absolutely pummeled the Wednesday night crowd. The ears were not happy while toiling away at the job the following day, and the voice was hoarse as shit from yelling along. BUT it was fucking worth it! You CANNOT pass up on a powerhouse bill like that, even on a work night.

Cat Rose owned the front row while taking photos and here's her offerings from the evening: 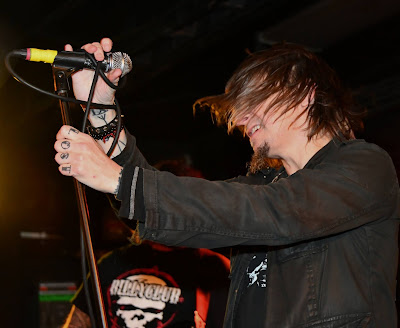 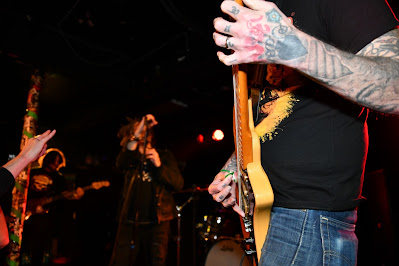 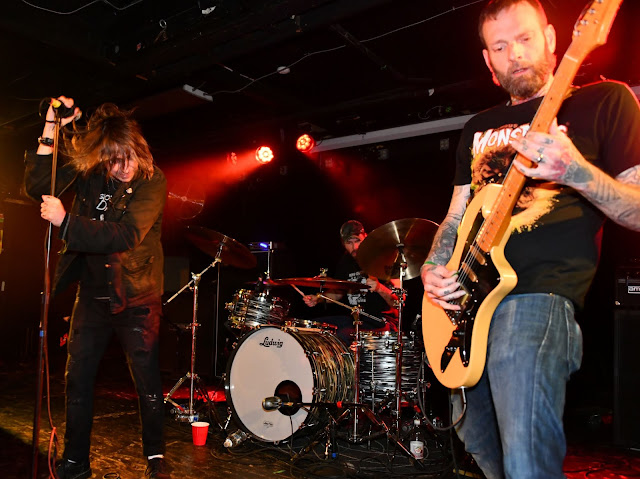 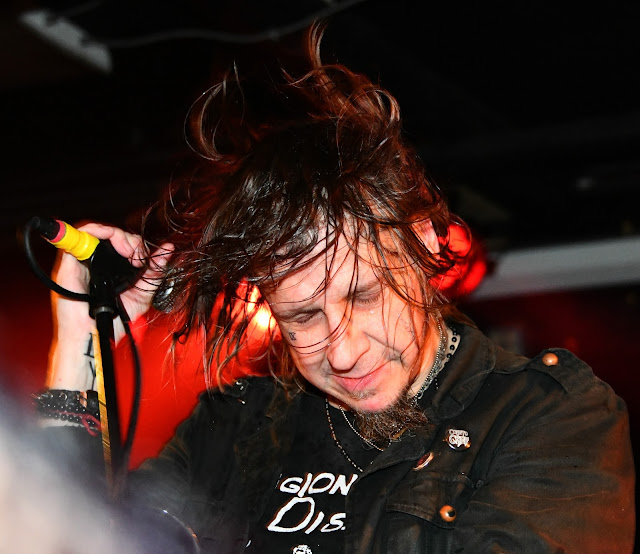 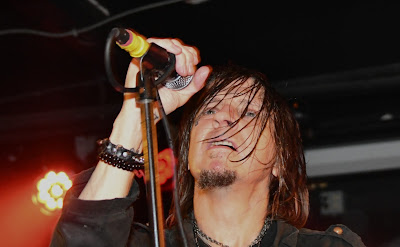 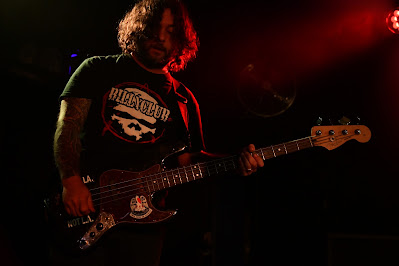 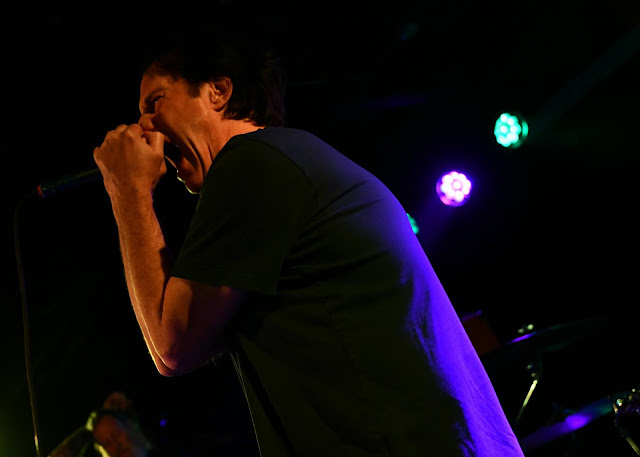 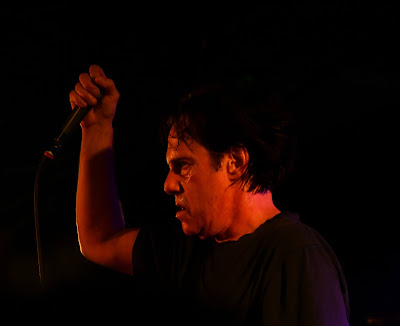 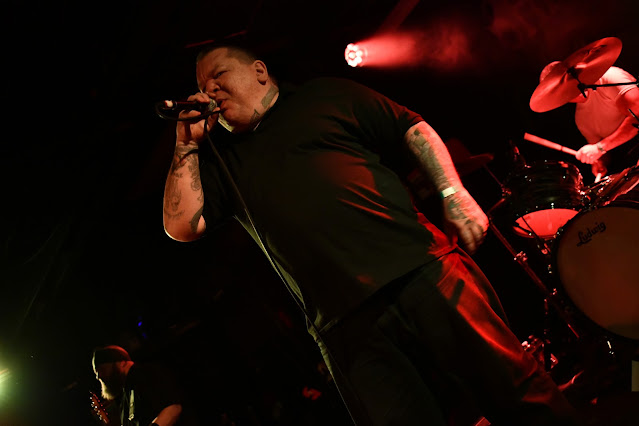 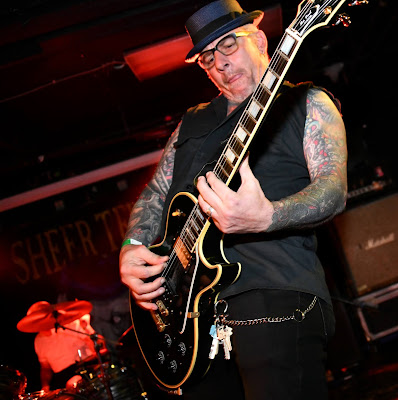 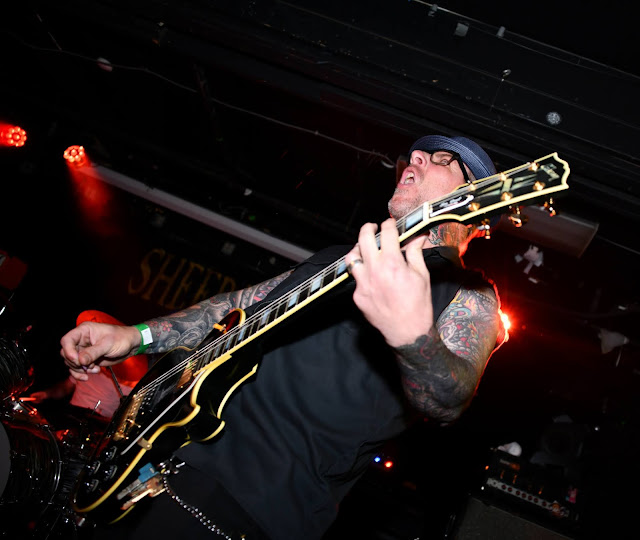 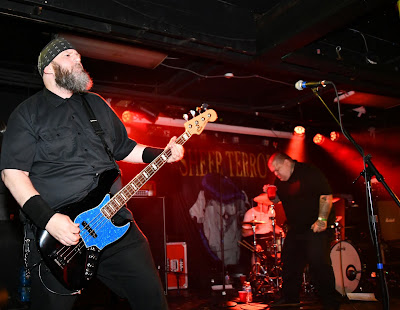 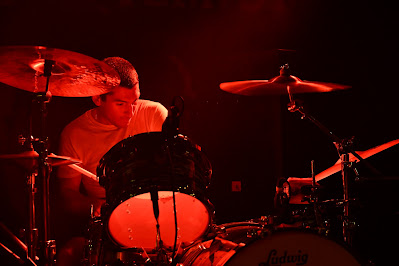 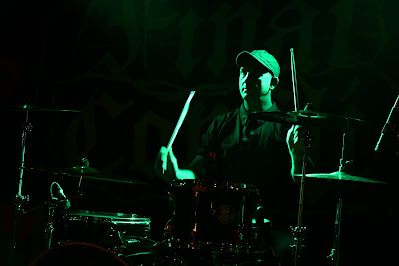 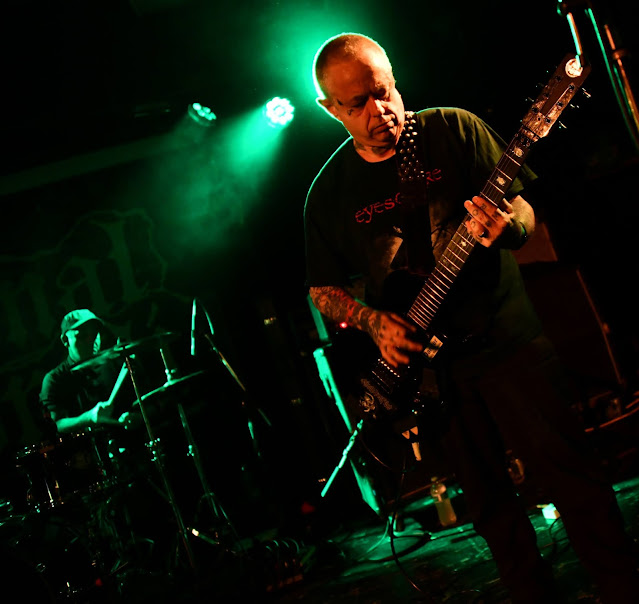 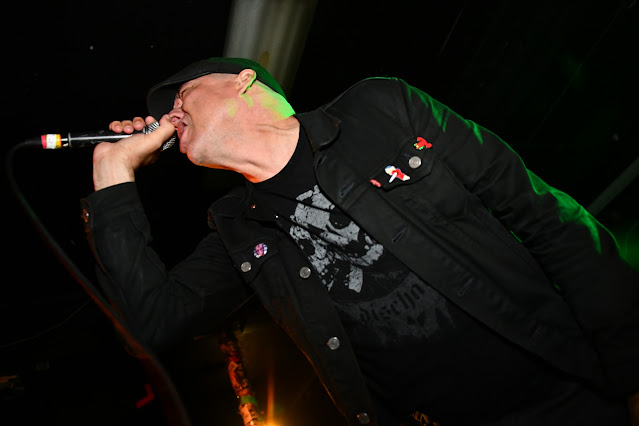 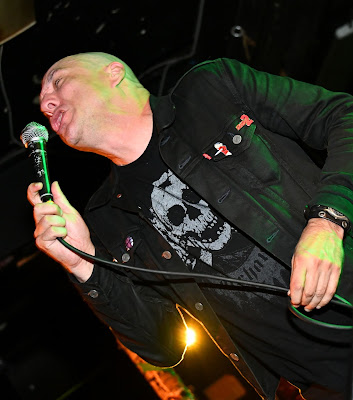 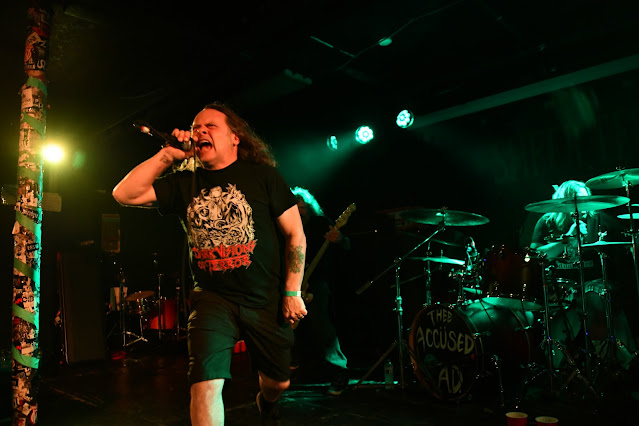 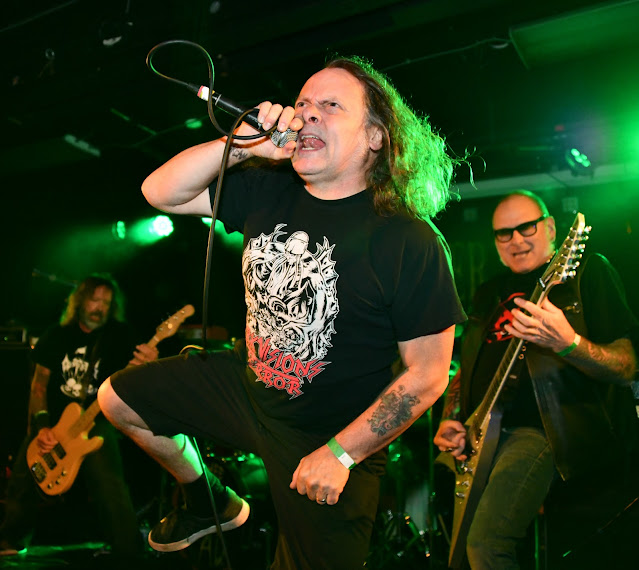 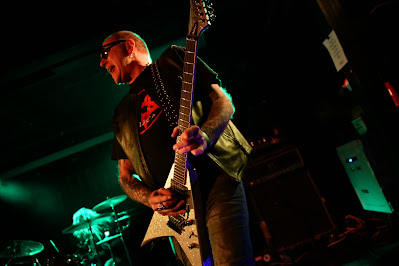 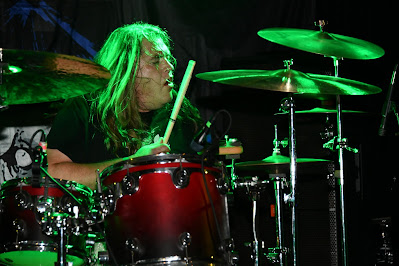 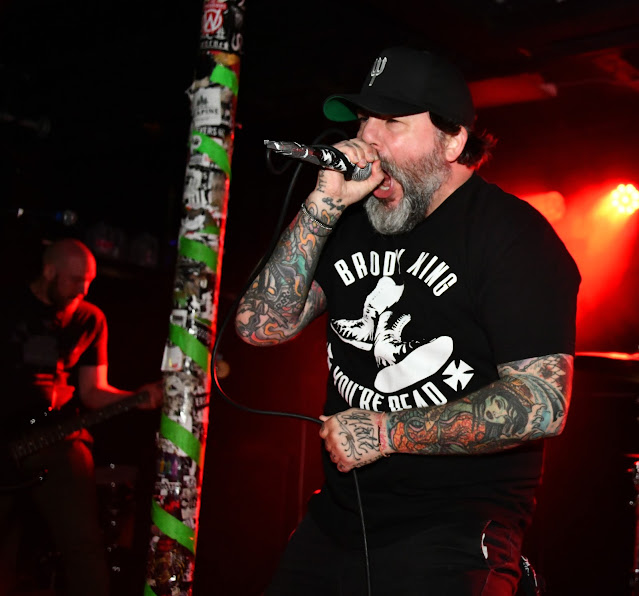 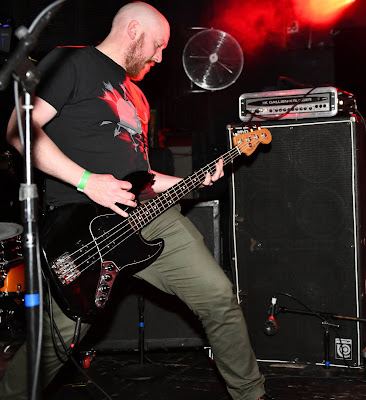 Gunner plays it heavy with End of Hope / Feature story

When he first heard the band name, Davey Gunner was immediately on board.

No full songs were written. No lyrics were penned. The moniker End of Hope was in the air and entrenched in Gunner's mind -- and it was fucking go time.

"I guess, because in a lot of ways, I'm a pessimist. You know, gloom and doom sort of, I guess gives me my fuel. So I heard that, I was like, 'That just nails it, you know?' But in the same sense, you got to have hope -- that's the one thing that keeps you going," said the 55-year-old former Kraut vocalist over the phone from his home in Astoria, New York on a recent evening.

End of Hope is the brainchild of guitarist Ken Wohlrob, who fired the band name and musical style off to Gunner in the summer of 2017 while they tossed back their drinks after watching a gig at the Saint Vitus Bar in Brooklyn.

Gunner continued with enthusiasm: "He said to me, 'Listen, I got this great idea. This is what I want to do. I want to make (a) cross pollination of like Black Flag meets Motorhead." He wanted Gunner on vocals, and they entered the studio within two weeks with bassist Davis Schlachter and drummer Dave Richman.

Wohlrob -- who also slings his guitar in doom metal band Eternal Black -- presented parts of 2-3 songs during that first session and Gunner came armed with lyrics typed into his phone.

"That's the new way. I used to write 'em in a book with a pen," laughed Gunner, adding that now everything's spelled correctly and he doesn't have to battle to read what he scrawled onto the page. "You know, not like 'Seinfeld' -- 'What's this, Clippers 119, Lakers 109?'"

Soon, they began writing songs with a fury and had a full 10-song set ready to unleash on crowds.

"Everything's been going great. We've been really fortunate," said Gunner, noting that End of Hope banged out 25 gigs before the pandemic hit.

"Everybody just took a liking to the sound. I think we created something a little bit different because of his background and the way he writes. And then the way I come in and I interpret the songs as I'm singing them. I sing punk, and he's not writing a punk song. He's writing just something, whatever it is, just heavy."

"I would say End of Hope is a punk metal band, to be honest with you," said Gunner, echoing Holland's sentiment that it's all rock and roll to him, even though Kraut was part of the original 1981 hardcore movement. They could slow it down or speed it up on stage or even on MTV via the "All Twisted" video.

"People would say, 'Oh, Kraut, you're a punk band or you're a hardcore band.' (Holland) would be like, 'We're just a rock and roll band.' That's Doug Holland. And he's right, it's just all straight rock and roll. And the guy grew up on the Beatles and T. Rex, this guy, and Mountain, so he's a great songwriter, Doug Holland."

Nowadays, Gunner is stoked with what End of Hope is knocking through the speakers on its "Cease and Destroy" CD and limited green vinyl release on Chain Reaction Records. For order information, visit https://endofhope.bandcamp.com/.

"It just came out very organic and very cool," Gunner said. He noted that they don't want to bum anybody out with the band's name, adding that there is some sarcasm slithering between those three words. When people delve into the music, it will all make sense as there's a theme running through the songs, he said.

Gunner recites the opening line of the band's namesake scorcher: "It's so hard to survive. We call this being alive. There is so much divide. Now we're just choosing sides. End of Hope. Stretch the skin."

"I think everybody feels that way -- unfortunately. And then this happened (pandemic). You saw the shirts we put out. We printed those shirts with the gas masks and everything before this happened. We just nailed it. And the whole concept of the album, I think. It's almost like this band has been right on top and topical right from the beginning. We've just been charmed," he said. 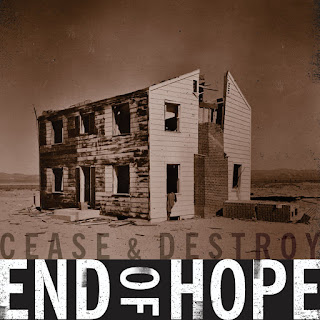 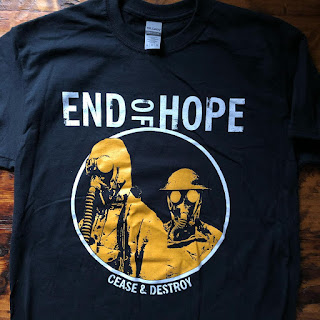 During the pandemic, Gunner and his bandmates are missing invading the stage and expressing themselves and releasing their pent-up energy. However, End of Hope recently added five new songs plus a cover of Motorhead's "Iron Fist" to its recorded resume. They also have a tune, "Nothing to See Here," coming out on Drew Stone's A7 compilation "Back to the NYHC Roots."

Gunner, who is married and has a 7-year-old daughter, said his wife digs his music while his youngster leans more toward the pop side of the music realm. No rock and roll -- yet -- but his daughter is proud of dad.

"My daughter told me before, I asked her about it: 'So when Andy calls me, what do you want to say?' And she's 7 and she said, 'Well, I think it's really awesome that you're a rock star.' I said, 'OK, I'll tell him that.' So that's what she thinks, so that's cool," Gunner said with a laugh.

Gunner's life behind the microphone in a live setting began at the age of 17 when Kraut opened for The Clash at Bonds International Casino in New York City in the summer of 1981.

At age 55, Gunner is still roaring away like he did when Holland, Don Cowan and Johnny Feedback were in his Kraut crew.

"Well, I got to be honest, it's something I've always done. So it seems very second nature to me. And I love it," said the man who now sports longer hair and a beard, which he says is a good fit these days. "I'm a different person, but I'm the same musically. I haven't changed a bit in the way I feel. I feel like the same I was when I was 17 as far as the things that affect me in everyday life. And what I want to write about, what inspires me."

On the lyrical side of the equation, the End of Hope vocalist noted that his friends say, "No Joe Strummer, no Dave Gunner." It's the truth, he said, adding that Strummer inspired the New Yorker with his social and political commentaries. That style has stuck with Gunner since day one until now.

"I hate corruption. I get just pissed off at politicians and the way things are done," he said.

He added that humans and their hypocrisy also spark his interest in the lyrics department: "That's what drives me. Every day when I see it -- it gives me fuel. Why another person would ever have the nerve to point fingers and judge another person, I find it fascinating and ironic. Because the person that's doing that usually is the person that's doing something creepy or wrong."

Looking back on his life and music career, Gunner has developed a patience that he didn't possess in his younger days, and he doesn't stress out over the little things that might not be meant to happen. His writing has been a constant companion to guide him along life's path.

"I don't have any complaints. I mean, you know, some would be right to say that I got shortchanged when Doug left to join the Cro-Mags. So fate would have been different if Doug didn't leave Kraut, which was the band he started," Gunner said.

"So it really doesn't make any sense. Some can say that. But then on the other hand, it's like just to have the opportunity to even get to do all those things, you know, have the record out ("An Adjustment to Society") so soon and be sort of like a pioneer and then be on MTV and have all the opportunities to play with The Clash and all the great bands from California," he added.

Gunner said that being in Kraut paved the way to where he stands now -- with his feet firmly entrenched in End of Hope territory. It's a journey, and he's learned copious crucial lessons while logging his 10,000 hours, he added.

Persistence is perhaps the most vital aspect of Gunner's life as he straddles the midpoint of age 50 and 60, all the while eyeing the future.

"It wasn't easy because I had to reinvent myself. I mean, I could have played hardcore, if that's really what I felt like I had in my heart that I wanted to do," he said. "And that would have been easier to play, just a hardcore band. I could still play balls lightning, I can still sing that way, that's not the issue. It's just that 'whacka, whacka, whacka, whacka, whacka,' I don't wanna play that.

Posted by Andy and Cat Rose at 9:28 AM No comments: