Jeff Pezzati probably wouldn't be surprised if a raccoon poked its head into the room while he was working on some new Naked Raygun tunes.

Perhaps the scratching of claws could inspire a riff or two.

Yes, a far-fetched scenario, but in all seriousness, Pezzati's fiancee rehabilitates raccoons in their home nestled in the small farming community of Amboy, Illinois. The approximately 3,000-resident town sits two hours west of Chicago.

"We bought a really old house. It's kind of statuesque. It's built before the Civil War and needs a lot of love and we're just fixing it up," he said over the phone at high noon on a recent Sunday. "We have a lot of animals always around," he reiterated.

At age 61, Pezzati has a couple of new songs knocking around in his head as he's in the process of moving his portable home studio into another room in their house. Set it up, crank it out, he added.

"I think as long as we have good new songs, it gets me excited again," said vocalist/songwriter Pezzati, whose longtime band will release a pair of 12-inch EPs before unleashing a fresh, full album, "Over the Overlords," on the revitalized Wax Trax! Records in June.

The songs within the grooves are culled from recordings from last year and reach as far back as 2016. The tunes are strong and well-thought out, said Pezzati, adding that the album was engineered and mixed by Steve Gillis and mastered by Ted Jensen, who worked on the Eagles' "Hotel California" album.

"The record actually sounds better than we can play. It's pretty frightening," Pezzati said.

One song penned by guitarist Bill Stephens, "Treat Me Unkind," is a stunner: "It's got harmonies on it that are just perfect -- we can't do them that well. It's just stinking perfect. It sounds like a machine or something," the singer added.

Pezzati said his poignant song "Suicide Bomb" features Aramaic singing: "That was the language of Jesus Christ. Kind of like hanging these notes and then hum and then we break off into some sort of like little chant thing. It's very different, very chant-ish, and in the background, it's kind of funny 'cause there's this girl singing 'Baby a-oooh' at the right times," he said with a laugh.

Former Naked Raygun bassist Pierre Kezdy, who passed away from cancer last year, wrote some songs and played on the album. One song that's included they used to call "Robert Mitchum Song," and now it features the title of "Soul Hole Baby."

Pezzati said that the band is pleased that Kezdy is represented on this album and it's crucial that they release it for him.

"He told us before he passed it was important that we get it out and we're doing our best to get it out. And the fact that he wrote a couple of songs for it is really great because he was such a great songwriter. He wrote 'Vanilla Blue' and he wrote 'Treason' by himself and he wrote 'Home' and some really great songs along the way," Pezzati said.

Naked Raygun, which hopes to play an album release show in June or July, performed an array of new and old songs recently for a livestream-only event at the House of Vans in Chicago. Pezzati said the band and his voice sounded rough during the eight-song set because their practice time/travel was hindered by ice storms, but they pulled it off. Dan Wleklinski from 88 Fingers Louie joined the band on second guitar on a few songs to put some extra roar in Raygun.

During COVID times, Pezzati, who was born in Chicago, released a five-song solo EP titled "Pezzati," which is available digitally on most formats. He's proud of the tunes he had kicking around for a long time and noted that "Make Me Whole" is one of his faves.

The current Raygun lineup features longtime drummer Eric Spicer and bassist Fritz Doreza. In recent years, Kezdy sometimes joined the band on stage while playing a "ba-tar," a bass/guitar mixture that Stephens constructed. It was difficult for Kezdy to move, but he played well, Pezzati said.

Kezdy was soft spoken, full of life, creative and easy to work with, Pezzati noted.

While playing a gig at Northern Illinois University, Pezzati said with a laugh that the usually mild-mannered Kezdy displayed a wild side. When the stage made of strapped-together folding tables started falling apart, someone ran into Kezdy while stage diving. The now-fumed bassist launched into the crowd after the guy and Pezzati thought the diver was toast. There was no brawl, and Pezzati thought the whole ordeal was kind of funny.

Pezzati's entrance into the rough-and-tumble punk world began with a gig featuring Chicago crazies Meaty Buys. He witnessed the Ramones early on, and Raygun ended up sharing a bill with them at the Aragon Ballroom in 1987. Along with those shows, bands like Cheap Trick, Rockpile, the Romantics and new-wave bands were on his concert list.

Naked Raygun was hatched in 1980, when Pezzati's brother Marko formed the band with Santiago Durango. At that time, punk music was inspiring, exciting and dangerous, said Pezzati, noting that on more than one occasion, normal types would scream at him in the street and want to pick fights.

"So we knew we were doing something right, you know?" he said.

Pezzati got in on the Raygun action when he was invited to attend some practices and give his vocal cords a workout. He doesn't remember them having a drummer at the time of his entrance into their world, but the truncated band played on. Pezzati got the job, and they would soon find a new drummer as well.

"Santiago was just so inspiring, he was so pumped about writing songs. He would write so many songs. He would change every song every time we came to practice. Something completely different -- he would call it the same name, though," Pezzati said. "He had a million songs up his sleeve and each one was better than the next one."

In 1983, the band released the "Basement Screams" EP and they were off and running.

By the time the "Throb Throb" album hit the scene in 1985, only Jeff Pezzati and bassist Camilo Gonzalez remained from the original lineup. John Haggerty, who honked some sax on "Swingo" on "Basement Screams," was now manning the guitar for the band with a crisp and crunchy Buzzcocks-like tone.

"'Throb Throb' was a great record, it's got some great songs on there, it's got 'Rat Patrol' and 'I Don't Know,'" Pezzati said. "I was told by a soundman that works at Cobra Lounge, not one week goes by where some band doesn't cover ('Rat Patrol') -- no matter what kind of music they play, even if they play like death metal or ska or whatever -- everybody plays 'Rat Patrol.' It's funny."

Durango was still present on the recording through songwriting credits on "Stupid" and "Only in America" (co-written with drummer Jim Colao).

When Raygun hit the road at that point, Pezzati recalls them often having to win over crowds that didn't have a clue who they were when the set kicked off. People especially went bonkers during a gig with Squirrel Bait in Kentucky, the singer said.

Kezdy and Spicer came on board the Raygun express for "All Rise" in 1986. Pezzati penned eight of the 11 tunes -- including standouts "Peacemaker" and "Home of the Brave" -- as the band hit a solid groove and began garnering more attention.

For "Jettison" in 1988, Raygun switched from Homestead Records for its first of three outings with Caroline Records.

Sterling gigs during that timeframe were a New York rager with Primus, Bad Religion and others; and killer hometown shows at the Metro and the Cubby Bear. Later on, Raygun would pack in 3,000 people at the Riviera in Chicago.

Now standing in front of larger crowds, Pezzati said he wasn't fazed at all while belting out song after song to the masses.

"It was really natural. I'm not really affected by crowds like that. Doesn't matter. I can go out and play in front of anybody, million people or one person. And because I'm singing, you know, I've been there so many times it's just by rote, you know, it's just no problem -- I have this down," said Pezzati, noting that in high school he developed near-sightedness.

"So everything's a little blurry out there. So past the first couple of people in the row, I can't see. I can see the person but I can't see their face necessarily. So it's kind of a nice blur. So it doesn't matter to me how many people are blurred," he added with a laugh.

When "Understand?" came around a year later, Pezzati felt the band was grasping for straws a bit while bringing those songs to life.

"I thought that were kind of niche writing at that point, kind of reaching for something we had written in the past and kind of trying to recreate that a little bit. And I think the album suffers a little bit because of that," he said.

However, with powerhouse songs like "Treason," "Hips Swingin'" and "Entrapment," that album is the band's top seller and Pezzati has royalty checks to prove it. "Hips Swingin'" makes an appearance in the 2018 movie "Tag," which is weird, but cool, he said.

With Stephens now on guitar after Haggerty left to form Pegboy in 1990, "Raygun...Naked Raygun" kicks open the door with Kezdy's "Home" and flows from there. Although Pezzati doesn't feel the engineer got a grasp of Stephens' big guitar sound on the album, the 11-song collection has grown on him over time.

"Some people really like that album, they relate to that album more than the earlier ones," Pezzati said.

With "Over the Overlords" on deck along with those EPs, Naked Raygun will surely have fans stoked to sing along -- at home and in the crowd when it's safe to do so.

Pezzati can't wait to once again deliver songs new and old to the Raygun faithful. 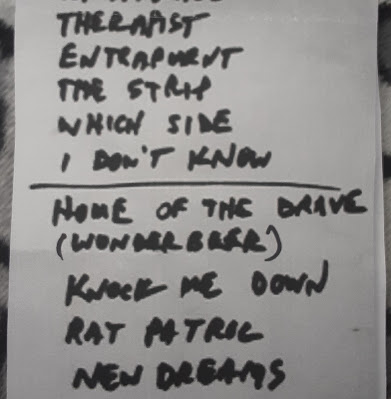