My brother Ed and I asked Henry Rollins heaps of questions when we visited with him at the SST Records office on Phelan Avenue in Redondo Beach, California, in 1982.

He reached into his box of tapes and played us demos and live sets from the hot DC hardcore bands that we knew of and regaled us with stories of his time on the DC scene before packing up his belongings and his razor-sharp voice and joining Black Flag.

Rollins was our personal DJ during those trips to SST, which we skateboarded to from our nearby home in Redondo. And we soaked up every second of it.

The names of the bands on the tapes were written in black marker, but they might as well have been scrawled in heavenly golden ink. Rollins took the excitement level up even further by vividly describing some of the gigs that took place in DC, all the while shaking his head and swinging his arm when a critical part of a song would arrive.

We received most of these records in our mailbox after ordering them from Dischord back then, so it was only fitting that the box set be delivered to our front porch decades later.

It's a very sentimental package for me. Those records were solid and blew my young mind open. Who would have thought that 40 years later, I'd still hold these in such high regard? Lyrics to these songs roll through my head on a regular basis -- kind of like life mottos in a way.

So, here's what Mr. Rollins has to say about the box set, which he, too, recently received from his pal Ian MacKaye (who sings on the Minor Threat records, and plays bass on The Teen Idles and bonus Slinkees EP with previously unreleased 1979 recordings):

** People are stoked to receive their Dischord first six records box set. With you being in the thick of the DC scene back then, what were your thoughts when you received the set? Did you guys ever fathom making a long-lasting impact like what has happened?

Rollins: I thought Ian and Dischord had outdone themselves. It took a long time and there were a lot of setbacks. I talk with Ian quite a bit and was privy to the progress. Ultimately, the sleeves came out looking great, sonically, the records are excellent and it allows people who want to hear these records as they were imagined to do so without having to pay collector prices. I don’t know if Ian would have ever thought Dischord would become such a thing. It’s not for me to say but I speculate one of the goals of Dischord would be sustainability. The ability to keep putting out records by DC area bands would be the marker of success. As far as someone looking at it from the outside, I think Dischord has had cultural impact. Other labels have formed using Dischord as a model.

** By checking out the Slinkees EP, it appears your first lyric writing credit was on their song "Go to Alaska." What's the story behind that song?

Rollins: Ian asked me if I had any songs. The Slinkees I guess were short on lyrics? I don’t remember. It’s not like I was a member but I had written those words and showed them to Ian. He borrowed the piece of notebook paper and eventually gave it back to me. Perhaps he copied it and gave it to Mark Sullivan. I have no memory of how the lyrics got to their practice room. The idea for the song was just a rejection of what I guess you would call consumer culture. History has proved I’m not an asset to the world of lyric writing but that was something I did. I think I was seventeen when I wrote that. I’m happy to be in some way involved with Dischord 0.

** Did you write the lyrics to all the SOA songs, and what was the impetus for penning those lyrics? They certainly cover a lot of ground -- from cops to girls to fights -- so were they autobiographical or about friends' lives?

Rollins: As I remember, there (was) at least a song or two that the band had when they were the Extorts that I sang but otherwise, I wrote the lyrics. To my memory, no one else volunteered any. All the lyrics, such as they are, were just writing about what was on my mind at the time, definitely about what was happening around me. 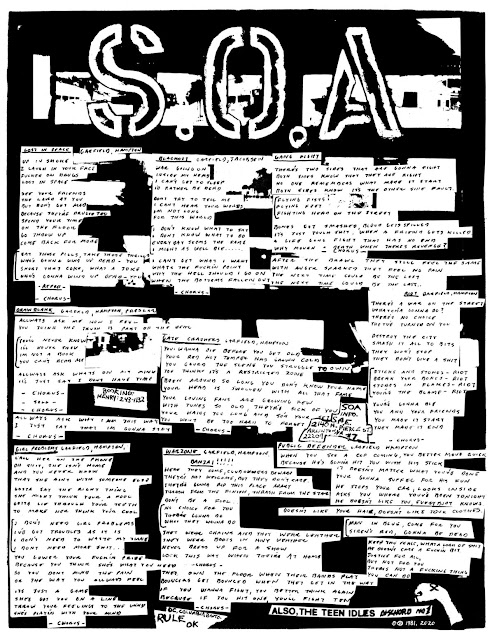 ** The SOA record is as stellar as they come, in my opinion. Did you think you had put something solid on wax at the time and do you think it's held up over the years?  What did you and the guys try to put across in the live setting? Were you an intense guy back then as you were later with Black Flag?

Rollins: I remember listening to the cassette of the songs when we were done. I played it once and put it away. I listened to the test pressing once when I got it but never played it again. I think at shows, we were just trying to get through the songs as best we could. The set was like twelve minutes. The shows were more like prolonged convulsions. I’ve always been an intense person I guess. Being in Black Flag allowed me to focus that. Greg Ginn and Chuck Dukowski wrote some songs you could sink your teeth into.

** What are your thoughts on the other records in the box? All six are stunners, for sure, and received copious spins on our stereo. Would you rank them high on your favorites list?

Rollins: They’re all good records. It’s difficult for me to talk about anything I’m involved with. The bright light in SOA was obviously Michael Hampton. He has a thing that is completely his own and it’s really good. You can hear it from Faith to Fake Names. I think the Minor Threat records would be my favorites in that batch but they all hold their own quite well.

** You're looking enthused on the back of the Teen Idles record in that group shot. What do you remember about that photo and the people in the shot?

Rollins: That was 10-31-80. The people in the photo were some of the ones you always saw at shows. Some of them are gone now. There are members of Teen Idles, Minor Threat and others. I have a copy of that photo framed. I’ve looked at it many times over the decades. Those were great shows. I feel extremely lucky to have seen the shows I did. I tried to go to as many shows as I could, we all did. They were great nights of your life. One thing I remember was that at the time, it occurred to me that these were going to be times I was going to remember for the rest of my life. It was never a casual experience. 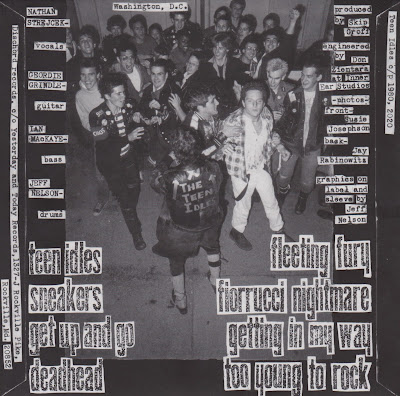 ** Then, you're on the left in the box set booklet photo of when the Teen Idles' trekked by Greyhound bus to play in Los Angeles and San Francisco. What was that trip like?

Rollins: Going out to California with the Teen Idles was a great adventure. All that way to play two small club shows, it might seem like a long way to go but it was completely worth it. We saw some great bands and the Teen Idles played really well. We went out there on a Greyhound bus, which turns into an intense experience by day two. To be in this very different part of the country with the band, getting to see the Los Angeles and San Francisco scenes as we did was a cultural knock out. There wasn’t a lot of sleep and some stressful moments but when we had gotten back to DC, we knew we had been on an amazing journey that we were lucky to complete. I’ve been very fortunate to have been Ian’s friend for so long and to watch Dischord grow and evolve over the years.