The Fastbacks Power-Pop it up at West Seattle Summer Fest

As we watched the mainly gently graying crowd pogoing along with Kurt Bloch right in front of the stage, we remembered just how damn good The Fastbacks are live.  We have not seen them play in over 10 years (they also have not played together in almost that long).
﻿﻿﻿﻿﻿
They reformed to jam at the West Seattle Summer Fest this weekend on July 8, 2011, after the lengthy hiatus and put some Cheshire-cat grins on people's faces.

Unfortunately, we were not able to get there until The Fastbacks played. Also on the docket, whom we sadly missed, were Stag, Red Jacket Mine, Cali Giraffes (Kim Warnick's new band) and Bloch's Thee Sgt Major III.  We did catch The Cops, who rocked balls to close out the gig.

With the original lineup of Bloch on guitar, Warnick on bass and Lulu Gargiulo also on guitar (whom Seattle rocker Don Blackstone calls "a butterfly of steel"), and current drummer Mike Musburger, they ripped the stage a new one. With their career from '79 to their last album from '99, they have a huge selection to choose from, all of which pleased the crowd (including us!) to no end.  There was one gentleman in particular that I noticed singing every word.
﻿
After they played, I overheard people stating how much it brought them back to high school all over again.  Speaking of high school, there were also many teenage kids there along with toddlers of many of the original fans, who were sharing their past to the present.  Thanks for the reunion 'Backs! 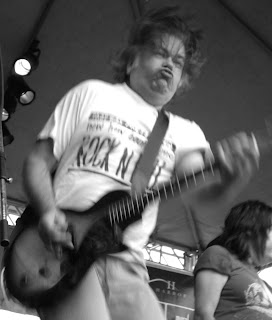