One minute you've got Leonard Graves Phillips of the Dickies pointing his friend Stuart (a penis hand puppet) at the El Corazon crowd. About an hour later at Neumo's, John Doe and Exene Cervenka are harmonizing through X songs to a much mellower throng.

That's the Seattle Soundfest for you: a variety of stellar bands to have you bobbing your head and sweating ... and then kicking back and appreciating a punk duo performing their songs campfire style. Not a bad evening.


Manny, Moe and us

To kick off the second night of Soundfest last Saturday, Cat and Andy chauffeured pal Diana to the Victory Lounge for some drinks and eats, and we soon hooked up with our crew of Pat, Nickle, Jeb, Angela and Bowie (not David). Tim and his daughter would round out the group later at El C.

Since we weren't able to enjoy songs like "The Murder of Liddle Towers" or "Last Night Another Soldier" by the Angelic Upstarts (who canceled due to Visa issues), we instead were treated to the Minutemen/Saccharine Trust-type tunes of San Pedro, CA's The Underground Railroad to Candyland. Hailing from the LA area ourselves, the old sounds with a new twist were right up our alley.

﻿Next up were the legendary Dickies, who raced through their set, hammering out all the usual suspects like "Gigantor," "Manny, Moe and Jack," "If Stuart Could Talk," etc. Phillips is still the best dancer around and his vocals remain spot-on. Stan Lee's guitaristry should be studied by all who wish to master the six-string.

After the Dickies and U.S. Bombs, we were torn on staying for the Vandals or heading to see John Doe & Exene at Neumos. Although I (Cat) did "Want to be a Cowboy" that night, we decided we had to go to see the members of X flaunting their kick-ass acoustic stylings. It did not disappoint and was a great ending to day 2 of Soundfest.

When we first got there, Sean y Zander were playing (featuring Wheeler of Throw Rag and hefty Circle Jerks guy Schloss and their scratchy voices via their folk/ragtime/bluegrass hybrid tunes). Andy and I sat in the empty merch-booth area for a quick rest before Doe & Exene started. While we were sitting there, we were approached by a couple wanting to know what we had for sale. When we explained that we had nothing to offer, they laughed, so we told them about this blog and Andy handed them an extremely mini flyer that he had made with our info on it. That seemed to satisfy them at the moment.


Anyway, once Doe & Exene started to play, we moved to the front of the stage and enjoyed it to the fullest. As they ramped through their set, including various X and Knitters songs ("Fourth of July," "True Love," "See How We Are" and "Wrecking Ball" to mention a few) there was someone else enjoying it maybe a bit too much. A drunken stumblebum female fan pushed forward to the front and started hanging on Andy as he was taking photos and also seemed to want to sing with anyone else that was singing along.

She seemed like she wanted to jump on the stage, but instead she reached down and threw something onto it. At first I did not see what it was, then saw that it was a random combat boot. Why she was throwing a potentially harmful object at them was beyond me, but what was really fascinating is that we saw her outside (after the security came and escorted her out of the gig for the way she was acting right after the chucking of footwear) and she was not wearing the companion to that boot. In fact, the shoes she had on were nothing like that boot, so we were left wondering where that boot came from. It was like those random detached feet that keep turning up in British Columbia -- we were left to ponder whose boot was it then? Had she stolen it off of someone or did she just bring an extra boot into the show for fun?

﻿Either way -- glad we did not miss them and we had our trusty correspondent Tim (aka Jaguar Bullet) to cover the Vandals for us below...

The Vandals hit the stage just a little after 10 p.m., delivering their uncompromising song list to an eagerly anticipating and highly energized crowd. Derek Grant (Alkaline Trio) flew all the way from Florida that morning just to man the drums for the evening. Talk about cutting it close! Apparently they have not rehearsed in awhile, but they did indeed deliver their "street cred" as promised on their Web site. Vandals fans went nuts! The crowd included "bouncer dodging" stage divers, a tireless fun pit, and wallflowers rockin’ out. 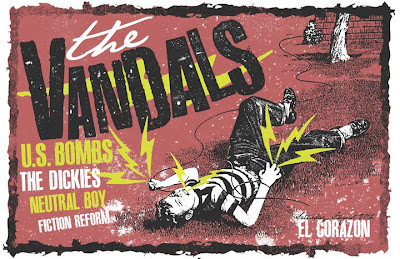 The set list included an array of songs across the chronological timeline board; however, punks of all generations knew them all. There were punk parents with their young kids, old punks, tween punks…seriously, it seemed we had 3-4 generations turn out for this show.

The Vandal anthems "Anarchy Burger", "Pat Brown" and "Urban Struggle" stood the test of time. Other crowd favorites were "An Idea for a Movie", "My Girlfriend is Dead", "I’ve Got an Ape Drape" and "Live Fast, Diarrhea!" The Vandals ended their set with "Don’t Stop Me Now" from Queen. If you have never seen the video for this, look for it now. After a genuine demand from the audience for an encore, they came back on stage and performed "Happy Birthday to Me" and "America, Fuck Yeah!"

It was hotter than hell in El Corazon, literally. Even the Vandals complained "You paid $40 for a ticket, you would at least think they would turn on the fans…open a door or something!" By the end of the night, the sweat-drenched punks poured out into the street gasping for air.

On a personal note, The Vandals have been my family’s "unofficial" soundtrack band through the years. This was my daughter’s first punk show ever, and it could not have been any better than this. It was somewhat awkward, yet bonding, as we both threw our fists in the air along stage side screaming "Diarrhea!" to the chorus.
Posted by Andy and Cat Rose at 7:54 PM