Archers of Loaf at Neumos in Seattle 9/9/11: Like a pin in your backbone: they stick with you

"Nostalgia" is exactly what this was...

From the last time we saw Archers of Loaf about 14 years ago to now...except for some minor graying and possibly some wrinkles (on behalf of the band and us), it did not seem that much more than a few weeks has passed. The energy and the experience of seeing them this past Friday night at Neumo's in Seattle was the same that I remember from back then. As I attempted to take the photos whilst singing and pogoing along with the crowd, I remembered why we would see them whenever we could when we lived in Northern California. We had never gotten to see them since we moved to Seattle as they broke up not long after that. Praise the skies for reunions!

The actual date we last saw them was 2/27/97 at Bimbo's 365 Club at the last Noise Pop Festival we attended (before we moved to Washington) in San Francisco. When we saw that they were playing together again and they were to play a gig here, we jumped on those tickets. Good thing, too, not sure if it was sold out-- but by the time they played, the place was packed all the way to the back walls.

﻿
﻿We first heard of Archers of Loaf while we were on an Irish bar crawl with a group of friends on Geary Street in San Francisco. We were looking through the SF Weekly and saw the name and started cracking up. Little did I know that they would turn out to be one of my many favorite bands, and especially one of my top bands to see live. 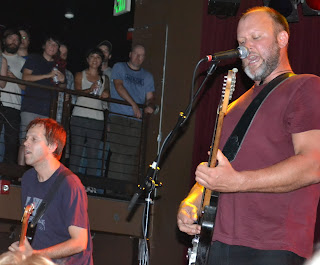 From the first song to the last, people did not stop jumping and singing along. From "Wrong", "Lowest Part is Free" , "The Greatest of All Time" , "Web in Front", "Audiowhore" and of course "Nostalgia" , etc. I can't remember the exact order of the songs, all I know is that I did not want them to stop. The crowd did not want them to quit, either, and were just as enthusiastic as the band --especially the amazin' bassist Matt Gentling, who got a complete cardio workout on stage just as he did back in the day. As the crowd surfing commenced, all I could say was "there's a chance that things'll get weird. Yeah, that's a possibility"--and bring it on baby, bring it on!

"They caught and drowned the front man
Of the world's worst rock & roll band.
He was out of luck, because nobody gave a fuck.
The jury gathered all around the aqueduct.
Drinking and laughing and lighting up.
Reminiscing just how bad he sucked, singing