Keith Morris Interview Part 2 / Getting OFF! with the Chili Peppers, bodysurfing, etc.

On a recent Wednesday evening while the weather blazed in the mid-90s in Los Angeles, Keith Morris was pleased to have a light breeze blowing through his front window.

He was comfortable. He was ready to talk.

After turning down the volume knob on his latest favorite tuneage, an album by the War on Drugs (a folky, rocky indie band out of Philadelphia featuring some John Lennon-, Bob Dylan-like vocals), the 56-year-old OFF! screamer tackled a variety of topics, ranging from OFF!'s recent opening slot for the Red Hot Chili Peppers at the massive Staples Center in LA to the tranquility of bodysurfing in his hometown of Hermosa Beach when he was younger.

Past and present wedge together in harmony for Morris. Here's a taste of what resides in his mind these days:

All of these global-warming detractors-- they can go fuck themselves. They get to experience hell on Earth... if they believe that hell is hot. I personally believe that hell is filled with all of those people, and who would wanna hang out with them? So, I'm gonna be good, I'm gonna be as good as I can. I'm gonna be friendly, oh, I'm gonna go to church and donate all my money to the church; that way, I buy my way into heaven. That seems like a great plan. I don't know if I would really do that.

I grew up around church people, and they were all very nice people, but some of them were racists, some of them are attached to (people behind Proposition 8 in Pennsylvania), anti-gay, that's pretty narrow-minded, maybe it's from all of the chocolate (in Hershey) that they've consumed. Maybe chocolate does affect people's thought process or brings on Alzheimer's early -- just fucks with their mentality.

I'm a diabetic, so my chocolate consumption, I try to keep it at a minimum. I don't do a very good job at it, but that's life. I don't drink, I don't smoke, I don't do drugs, so I might as well get to eat some chocolate.

It was a very weird experience for me. We get a lot of haters (on Facebook), from the punk-rock community, the people that listen to us. Those people don't like the Red Hot Chili Peppers because they sell millions of records and they jump around and they get really hot chicks and get to go to all of these different places. I pretty much adhere to a rule that if you go out and you do the work, you deserve some kind of a reward. And they're obviously being rewarded, and hooray for them because they worked hard. It wasn't like some record company just handed it to them.

I grew up with Flea and Anthony and watched them running with all of our peeps, being a part of our party, deciding to start a band. Granted, I don't like everything they do, but I like them as human beings, and think that's even more important than whatever kind of music they make.

(Editor's note: They grew up with X, Gun Club, Flesheaters and the Germs. Flea played in FEAR and the Circle Jerks, the Weirdos and wanted to play in Black Flag.)

So it's not like they're these guys who think that it's trendy to say, "Hey, we love this stuff," because they listen to a lot of different music, just like myself.


I started a new band, why adhere to some kind of fucking Rule No. 3? These are the bands you can play with and you can't play with. You're not cool if you play with these bands. You're not cool if you play a gig with these bands and it's really expensive and we can't afford to go to it. It's like, hey, life's unfair, life's unkind, we'll get around to coming back and playing in a club. Anthony made a statement on stage: "The next time OFF! plays a club show, I want all 14,000 of you to show up at the club." Just think about it, just think of all the different scenarios.

(The show) was extremely odd for me, because when you're in a building that big, you have security everywhere. Every time you turn around, there's somebody breathing down your neck. In order to get a simple "yes" or "no," you've gotta go through a minimum 2-3 people. That I don't like.
I just look at it as a big party. It was kind of intimidating. I looked down into the front row and there was a girl sleeping in the front row while we were playing. Maybe she had a little bit too much to drink, maybe she found a Quaalude dealer,  who knows?... the guy that she was with certainly wasn't enjoying what we were doing.

(Editor's note: They played to maybe 6,000 to 8,000 as openers. While living in Boston years ago, Morris sang Black Flag's "Fix Me" with Mudhoney -- who were opening for Pearl Jam -- in front of about 15,000 people at the Boston Garden. He also sang with the Chili Peppers in front of 70,000 to 80,000 when they opened for the Rolling Stones at the Rose Bowl in Pasadena.)

I got a surfboard one Christmas morning with a westsuit, (the water) was fucking freezing. There were no waves, they were just 15-foot walls, you couldn't surf it, no matter how great a surfer you were. There were like 300 guys out there, a hundred of them had just gotten new surfboards from their parents. We'd smoke angel dust, so we were fucking high as kites, just got out there and it wasn't fun. I actually ended up surfing maybe two or three weeks, and decided, "You know what? Nah, I'm not into this."

I love bodysurfing. I grew up in Hermosa Beach... one of the last places I lived in Hermosa Beach was near the Strand on 9th Street. So, on a summer evening at about 5 o' clock, when everybody had left the beach, I remember there were quite a few days where I walked across the sand, there was nobody on the beach. I'm just out there swimming around, paddling around, floating around and catching a wave here or there. The brilliant thing about bodysurfing is, depending upon what time of year, of course, all you need is a pair of trunks, some shorts, and you're off. You're one with nature, whatever you would like to call it.

I grew up with hippies, and I love them and I love the mentality, and it would be great if we had that kind of mentality now. You would think because they smoked so much pot, that they were just passed out all day long, and that wasn't so. I was actually around a Yippie, and he would have blown up a police car or two, he would have blown up a Bank of America somewhere if he had the opportunity. But the hippies that I grew up around, they were down for the protest -- they weren't down with the man. They weren't buying into any of the program.....

Morris noted that OFF!'s upcoming monthlong tour with Negative Approach, The Spits, Double Negative and Power Trip (not the Jeff Dahl outfit) won't have them sleeping on people's floors or living on $5 a day like in the old days:

"We're older and we need a reward," he said. End of interview. The road awaits. 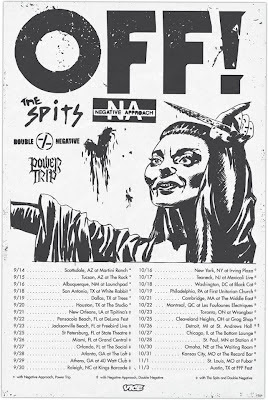