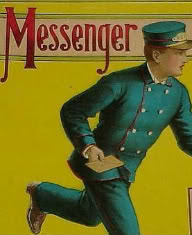 The music follows you wherever you go.

Once you're in, you can't stop thinking about it, you find yourself relating lyrics to certain scenarios and even thinking that people on the street look like musicians in bands. You do a double-take, and think, "Nah, that's not him," but end up with that band's tunes in your head all day. You've got no choice --- the music's part of you, and that's a good thing.

After graduating from San Jose State University in the winter of 1989, I moved back home to Redondo Beach, Calif., for about eight months and took a job at the Mustang Messenger service to pass the time and earn some cash. My journalism degree wasn't getting any action during this time, but I did try to get on board with record labels as a publicity guy. I got a phone call back from Bryn Bridenthal of Geffen Records and interviewed for an internship with Enigma Records, but those gigs were not meant to be.

So, a-messengering I went and it turned out to be a pretty interesting eight months.

Sure, it sucked that the car went through the wringer during this time with some insane wear-and-tear due to driving all over the Los Angeles and Orange County areas. Most deadlines were met, but at times I had some office manager or dispatcher yelling at me because the job wasn't done on time. Sometimes, it was fucking impossible to unload a car full of packages at the arranged time -- even if the route was "perfectly" planned with a Thomas Guide mapbook -- because you had to deal with traffic, unknown neighborhoods and just general bullshit that comes with driving around the LA/OC areas.

So where does the music come in, you ask?

I got to mentally relive some of the gigs I attended in the early '80s by driving by the Whisky A-Go-Go, Hollywood Palladium and other Sunset Boulevard spots on a regular basis whilst delivering the goods. Once I was on Placentia Avenue in Costa Mesa and drove by the area that housed the old Cuckoo's Nest; once, while in the San Fernando Valley, I delivered something on Vineland Avenue near Godzilla's. Punk-rock memories, you can't beat 'em.

There were a few times, however, when those look-a-like musicians were the real thing.

For instance, I met Kimm Gardener, guitarist for Channel Three, while I was making a delivery to ADP payroll services on Orangethorpe in La Palma, not far from where the band formed in Cerritos. The dispatcher said that I would ask for Kimm, and noted that "she" would meet with me and sign for the package. When I heard the last name, I told the dispatcher that it was a "he" and that I was on my way. I was on Gardener's route a few times and we discussed CH3 and other bands from the old days.

Then there was one Friday -- Paychex day -- when I was sent to some practice/office space on Hollywood Boulevard, near the iconic Capitol Records building. Wouldn't you know it that typed on the envelope was the word "Megadeth" -- that's right! Bassist Dave Ellefson greeted me at the front door and I handed him the package. He was excited to get his earnings and strolled off down the hall. Dave Mustaine was nowhere in sight, so I didn't get a tongue-lashing for dropping off the checks a few minutes late.


On a final note, one other messenger probably didn't know what gem he was carrying when the dispatcher asked him if he had the "Social Distortion album" package on board in his car and was headed to the Sony offices. "Ball and Chain," "Story of My Life" .... would that package have ever arrived at its destination if I was the messenger? We'll never know. 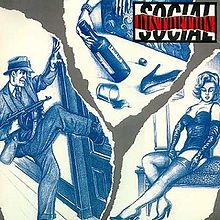