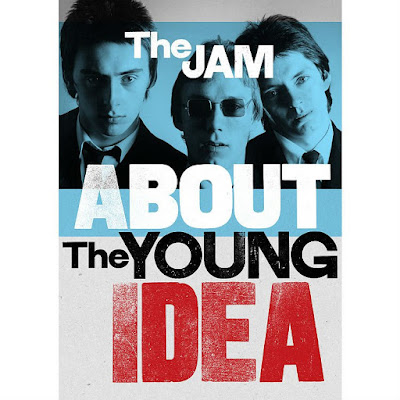 For those of you, like me, who have long lamented the criminally-short tenure of the Jam, Paul Weller makes it absolutely, categorically clear that there will be no reunion. Ever. Talk about a bitter pill to swallow, eh? I was lucky enough to see the Jam a handful of times from 1979 to 1982: in DC/Maryland, New York, London and Loch Lommond (Scotland). If you never got the chance to see them, you might still catch the Bruce Foxton-led From the Jam or Weller’s solo performances. But if you want to see the band as they were, your best bet now is the new Bob Smeaton-directed documentary, "The Jam: About the Young Idea."

The release of the film coincides with the recently-ended Sommerset House exhibit of the same name, and a new 47-track CD anthology. Smeaton, who was also involved in the epic 1995 Beatles Anthology, does a masterful job of chronicling the band and its impact on fans, music and popular culture.

The lifespan of the group was a mere ten years, from 1972 – 1982, but it wasn’t until 1976/77 and the punk explosion that the band rose to national and international attention. It was shortly after this time that I became aware of them. A good friend knew I liked the Ramones and off-the-radar music, so he gave me a stack of records he’d brought back from a recent trip to England, and said: “these will change your life.” Among them were "Never Mind the Bollocks," the first Clash album, Wire’s "Pink Flag," the first Damned album and both the Jam’s "In the City" and "This is the Modern World." He was right: The music, the energy and the messages from those bands (and so many others from that time) resonated with me from the start, and it has stayed with me all through my life shaping both my ethos and the type of music I’ve chosen to play for the last 30 years.

The film starts out with the Jam’s first two members, Weller and his friend Steve Brookes, in repose and re-hashing the past, both musically (spontaneously breaking into "Slow Down" and "Bye Bye Love" together) and in conversation. Brookes points out that their ambition was to be “bigger than the Beatles.”  So many of the Jam’s contemporaries were quick to cut ties with music from previous generations (“no Elvis, Beatles or the Rolling Stones”). The Jam, however, blazed a modern trail all the while acknowledging musical influences such as The Who, the Beatles and American R&B. This resonated with me –- likely because that’s my generation, as well. The Beatles were the band that got me interested in music in the mid '60s –- and I grew up on both British invasion and American soul (though it wasn’t till I met Joe Strummer in ’79 that I actually got off my ass and joined a band).

As Weller was quick to give a nod to the band’s musical and stylistic influences –- I, too, feel compelled to give a nod to the Jam’s influence on me. Though I embraced the punk scene immediately and completely –- I also had a great appreciation for those bands that embodied the energy, rebellion and edge of punk rock, while trying to carve out a scene of their own. None did this better than the Jam, single handedly reviving the Mod subculture and inspiring kids all around the world to embrace the style and music. I was never a Mod per se, though my current band, Dot Dash, has been called post-punk-mod-pop on more than one occasion. Perhaps that is because the band’s original line-up included Bill Crandall, the guitarist from DC Mod legends, Modest Proposal. I, along with Steve Hansgen, were recruited to play in Modest Proposal’s 25th anniversary show. At that show, Terry Banks, Hunter Bennet and I (all fans of the Jam) recruited Bill to start Dot Dash. He played on our first three records –- and Hansgen replaced him thereafter.

Though Brookes’ “bigger than the Beatles” comment seemed to be a casually acknowledged remark –- the similarities between the two bands are worth noting: Both bands came from humble beginnings. Both bands had a lasting impact on youth (sub)culture (Beatlemania and the Mod revival). And both bands quit while still at the top of their game. The Jam also had more subtle nods to the Beatles that can be seen and heard in a variety of ways: photo shoots, cover songs, clothing and the symbiotic relationship with their respective producers. But for all the similarities –- and the band’s refusal to disavow its past, the Jam were every bit as explosive and innovative as the Clash, Pistols, Buzzcocks, etc. And while they positioned themselves as Mods –- to me they were always a part of the punk fabric that shaped me.

Smeaton pulls together all the original players to help weave his narrative: Weller, Foxton and Rick Buckler. He also enlists some who helped shape the band’s career: Chris Parry, who signed them to Polydor Records, and long-time producer Vic Coppersmith-Heaven. There are also a variety of famous and not-so-famous fans who talk about the undeniable impact of the band, both broadly and on their individual lives: from Martin Freeman (yeah, it makes sense that he was a Mod) to Keiko Egawa, a Japanese teenager who came to London in 1978 ostensibly to learn English, but who was secretly using that as an excuse to go see the Jam (she’s still living there today!).

Live performances and previously-released videos also punctuate this film and will remind you of just how brilliant a band they were. This was a band truly connected to the young idea: both in the songs they wrote and in the way they connected to their audience. And it is worth noting that when he called it quits at the tender age of 24, Weller and the Jam had already released six studio albums and had 18 CONSECUTIVE top-40 singles in the UK.

Weller closes the film with his emphatic assertion that the Jam will never reunite. But he also correctly notes that the band “has legs” –- and that young people are still discovering and embracing the band’s music and legacy. The Jam have certainly had lasting effects, not just on Dot Dash, but on Oasis, the Arctic Monkeys and more. "About the Young Idea" is currently playing on cable’s Showtime network, and it is a vital document of one of the most important and inspiring bands of my generation –- and yours.