Sometimes, stuff snaps right onto your radar. You don't even have to seek it out.

When our pal Mike Isberg enlightened us of the band he was handling bass duties for, The Cheap Cassettes, we were instantly on board while their influences rolled off his tongue: Buzzcocks, The Jam, Elvis Costello, The Boys, etc, etc.

After meeting guitarist/vocalist Chaz Matthews at a gig at Darrell's Tavern in Shoreline, WA, the bond was solidified when we spoke of our affinity for Rudi -- Belfast's first punk band. Kevin Parkhurst rattles the skins for this solid band, which will unleash its tuneage and sweat on Oct. 7 at The Sunset in Ballard.

So, here's some Cheap Cassettes action for ya. They've got a new two-song digital single out today, so check it out at https://cheapcassettes.bandcamp.com/. And yes, there's some cassettes available on Cassettes On Record Records/Rum Bar Records. 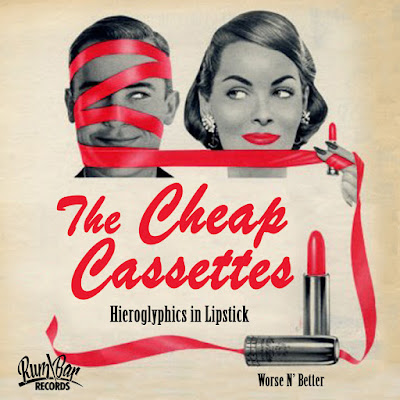 ** Tell us about the new single. What makes this new batch of songs special?

Chaz: We recorded four songs at Egg Studios (Seattle) with Kurt Bloch. Two of them will be out this month as a digital download through our bandcamp and the Rum Bar records site. The other two will be a vinyl single on Rum Bar records that should out around December '17 or early 2018. They're just the A grade level examples of our typical three-chord heavy pop sound. With the exception of "Kiss the Ass of my Heart", they're all songs that we've been playing live for a year.


** Were these easy or tough to write? Give us some insight on the keys to writing memorable songs?

Chaz: First, you've gotta get the blood of a virgin. I won't ask where you got it. Then, you've got to soak your underpants in that and wear them for a few days. Then, and this is important---you've got to take a dump on a photo of Cher while she was dating Gene Simmons. If Gene is in the photo as well, the songs will be even catchier. Then you need to watch all the episodes of "Ozzy and Harriet" that have Ricky singing a song. Eat a pastrami sandwich and pet a cat while it sleeps. Bam! Instant hits are yours for the making!


** How did you hook up with Kurt Bloch and what was it like recording with him?

Chaz: He came to a show we did at Darrell's- it was our CD release thing after Rum Bar re-issued our "All Anxious, All the Time" disc. We played a Flop song that night, and I guess he just looked into our dewy eyes and fell deeply in like. We asked him to work with us and it all started there.

Kevin: A few months before that show, I had suggested to the boys that we cover "Anne" by Flop and they were kind enough to learn it to play live. Kurt produced that song and even starred in the video. So long story long, there we are, nervous as shit, playing "Anne" with Kurt front and center singing along! We had no idea he was going to be there.  So after our set, Chaz and I approached Kurt to say "hey" and Chaz blurted out "would you like to record us sometime?" And Kurt just said "YES! We are on the same wavelength!" That was that. As far as recording with him, it was a BLAST. He such a cool guy and so down to earth. The best recording experience I have ever had. The only thing I regret is not asking him to play the intro to "Gone To The Moon" over and over again.


** What were some key bits of rock wisdom that you gleaned from Bloch during the sessions?

Chaz: Wow, I dunno, we had a lot of great talks with him. I thought I knew a lot about the Equals but he knows way more. We talked guitars for awhile, and that was super fun. Musically he just lets you do your thing and makes everything sound as great as possible. These four songs are the best thing I've ever been a part of, and I've got a few records under me belt.

Kevin: For me, it was just relax and be yourself. Just be you and play how you play.


** Egg Studios is a legendary spot -- what was it like roaming its hallowed halls and knocking out your own tunes there?

Chaz: Wow, just incredible. The place is a living museum of PNW Rock and roll. When you think of all the bands that recorded their best work there- Mudhoney, Young Fresh Fellows, Devil Dogs, Model Rockets, Flop, Supersuckers- it boggles the mind. On the other hand, it was instantly comfortable the moment we walked in. It's a bummer that it's going away, but cool that we were one of the last couple of bands to ever record there.

Kevin: It was a dream come true for me. Ever since I was a little kid, it was my goal to record there. It is exactly how I imagined. Almost half of the records I own can be traced directly back to Egg, Conrad (Uno), Kurt or Popllama. Having Conrad being around here and there and being able to pick his brain was huge for me as well. It's sad to think that Egg Studios is no more. So glad we got to record there. 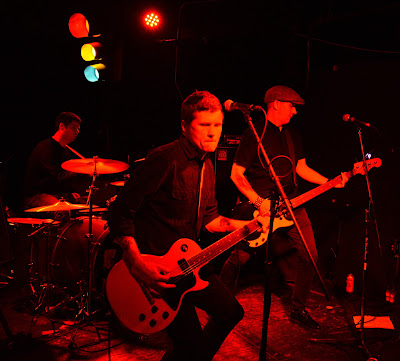 ** Give us some background on The Cheap Cassettes, where and when you formed and what's on tap for the band now and in the future.

Chaz: We are all Boston natives who have moved to Seattle within the last few years. Don't worry, we aren't tech vultures- we are all very poor blue-collar dummies. Kevin and I were in the Dimestore Haloes in the '90s/2000s. That band made a lot of records and played a lot of shows, and did pretty well on the East Coast. We made the first Cheap Cassettes record as a long-distance recording project. We both ended up moving here to Seattle with our wives, and then we found Mike Isberg, who also moved here from Boston with his wife. We didn't know him from Boston, despite moving in all the same circles. Seemed like fate. Then Rum Bar Records, a Boston indie label, re-issued our self released first record and here we are. Life, huh? She is crazy! As for the future, we are spectacularly, fabulously, wonderfully without any kind of plan. Play shows, write songs, make records, drink beer. Amen.


** Your list of influences is long... The Jam, The Boys, Rudi, etc ... what is it about those types of bands that have fired you up over the years?

Chaz: I like loud guitars and catchy melodies. That can mean Rick Springfield, Muddy Waters, Big Star or the Cramps- and everything around, above, below and between. I do admit that the sounds and visions of the late '70s and early '80s seem to pop up in what we do a lot. The Replacements and the Jam are very huge deals to all of us in this band.


** What's the ultimate goal you'd like to achieve with The Cheap Cassettes? What do you want people to come away with after watching you play and listening to these new songs?

Chaz: Well, you know- Mike and I are in our mid/late 40s and Kevin is in his late 30s- we've been doing this since we were teenagers in various bands. We've all tasted a little success, and also have had a lot of let downs. I tried to retire from music, but it keeps pulling me back in! At this point, we are enjoying playing real rock and roll and very much enjoying the real rock and roll audience in Seattle. We've met so many great people and have been inspired by playing shows with so many great bands here. We just want to play music, make records, drink beer, and have fun. We bring an old-school recklessness to it that maybe young bands who want to "get somewhere" don't have. And a quality of songwriting that isn't seen as much these days, I guess. And we are snappy dressers. That's all I've got for ya!