Corrosion of Conformity roaring to go with new album, ‘No Cross No Crown’

It’s been a while, right?

After a 12-year hiatus from recording with vocalist/guitarist Pepper Keenan, the venerable and brawny original Corrosion of Conformity trio of drummer Reed Mullin, guitarist Woody Weatherman and bassist Mike Dean have the frontman back in their clutches to bestow upon us a new album, “No Cross No Crown.”

The rock will roll when the album is released on Jan. 12, 2018 by Nuclear Blast Entertainment.

With Keenan back in the fold, the band toured for a year, kicked into the recording process about 10 or 11 months ago and blasted this one out in about 40 days during that timeframe. The last Keenan-fronted COC album was “In the Arms of God” in 2005.

Once again, John Custer was in the producer’s seat to help whip the album into shape in a North Carolina studio.

The 15-song set includes the walloping “The Luddite,” “Little Man” and “Forgive Me”  interspersed with melancholy guitar interludes like “No Cross,” “Matre’s Diem” and “Sacred Isolation.” (New song "Cast the First Stone" below.)

According to an Earsplit PR release, the album’s iconic title comes from a recent tour stop in England.

“We were playing this old church from like the 1500s that had been turned into a performing arts center,” Keenan recalled. “The dressing room had stained glass windows and one of them showed this poor fella being persecuted. Underneath it said, ‘No cross no crown.’ So I just took that idea. We’re not trying to be on a soapbox, but we used it as a catalyst to write songs around.”

Keenan is stoked to be part of the COC steamroller again.

“It’s an honor to be back out there and have an opportunity to do it again in a real way and not some washed-up reunion thing. Even before we wrote the record, we were out there for a year seeing there was a demand for it and that there was a void that we could fill,” he said in the release. 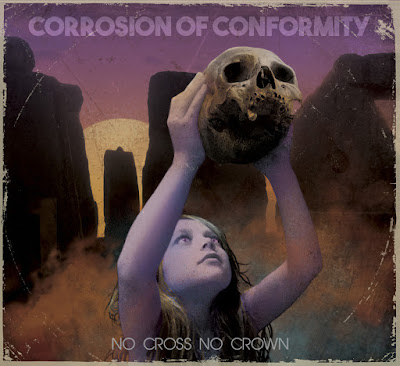