Well, that's because the powerhouse San Clemente, Calif., foursome is on the damn thing.

The page notes that Rush's Alex Lifeson supplied his guitaristry to the new Fu Manchu song, "IL Mostro Atomico," which clocks in at 18:08 and inhabits the entire second side of its new album, "Clone of the Universe." Fu Manchu will unleash the seven-song record on Feb. 9 on its own At the Dojo Records.

Rush adds that the closing track -- which is broken up into four sections -- is the exact length of its epic six-section journey, "Cygnus X-1 Book II: Hemispheres," which owns the whole of side one of that album.

According to drummer/percussionist Scott Reeder's blog, Fu Manchu's management arranged for Lifeson to play on the mammoth tune.

When Lifeson was available, they sent the tracks to the guitar maestro, he performed his wizardry and fired the tracks back to the Fu Manchu guys. They were stoked beyond belief, of course. 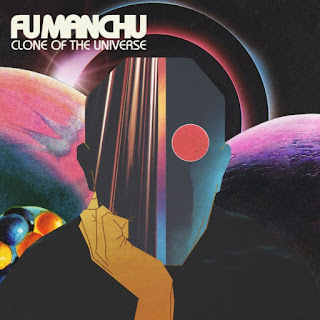 Fu Manchu delivered the blistering title track of the new one to fans on its recent run of West Coast gigs and people welcomed it with pumping fists into the band's catalogue.

“We are excited to get out and play this stuff, especially 'Il Mostro Atomico,'" said guitarist/vocalist Scott Hill in a press release. “We think it’s some the strongest music we’ve ever done. We really love the overall sound of the album and having Alex (Lifeson) play on it is just incredible. It gives it that special validation for the idea that we had to try something like a side-long song.”

The band -- which also consists of guitarist Bob Balch and bassist Brad Davis -- will play a heap of live dates all over the globe in the new year: