Record roundup: CH3, The Berzerkers, The Proletariat and Greg Antista and the Lonely Streets 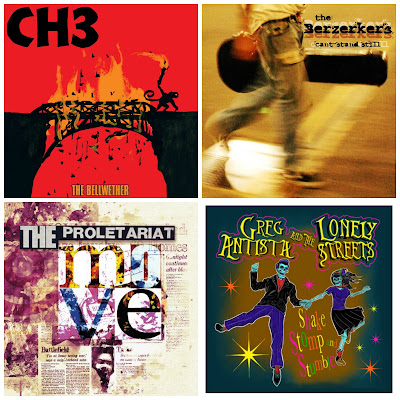 No matter how many years we accumulate on our life's time card and lose count of the birthday candles, some musical treasures are always at our fingertips.

CH3 keep the flame alive with their latest five-song EP on Hostage Records. Five-song EP, you say? Yep, just like in 1981 when they burst out of the gate with their robust Posh Boy platter, which I purchased at Zed Records in Long Beach, CA -- not far from the band's hometown of Cerritos --  that same year with some birthday cash.

DJ Rodney Bingenheimer dug the record, too, and my brother and I first heard CH3 on his KROQ radio show. CH3 still hits Rodney in the right spot as the man spins tunes off the new EP on his Sirius show. Fucking full circle, right?

The title track reminds me of a quicker "Indian Summer," and that rules since that's been a favorite forever. "Blackballed" bursts forth on side two and has one foot in early CH3 terrain and the other in the rock days; a perfect blend, and one can't help but envision the steel-toe and cowboy boots facing off and then strolling into the night together.

CH3's Plimsouls cover of "How Long Will It Take" wraps the package up nicely with a bang. Peter Case once called me from a payphone on Hollywood Boulevard for an interview.... This CH3 record is my phone call from Cerritos.

Have you ever thought what would occur if your '70s hard-rock records peeked down the line at your '80s power-pop platters? You'd get The Berzerkers, of course.

Rock, pop and punk collide on this Hostage Records release. With these tunes packed in their guitar cases, this Orange County, CA unit should feel at home on a big-lit stage or in a grimy club with one light bulb overhead.

If placed in sturdy hands, one guitar can usually do the job, but these guys unleash three six-stringers on us and a heap of melodies to boot. I could easily see them joining CH3 on that Plimsouls cover and then bringing Scott Gorham from Thin Lizzy into the fold for some tunes. You get the picture.

My old pal Hank Jacobson mans the drums on this one. I first saw Hank play in Manhattan Beach punk band Con 800 back in the day, and it's good to see him still banging away on the kit.

Scratching and snarling from the opening chords of "Incarceration Incentive," it's vital to have The Proletariat back in our world.

With Lou Giordano in the producer's chair once again and with the familiar Radiobeat Records logo on the back cover, the Massachusetts band arms us with a soundtrack for injustice. When vocalist Richard Brown yells, "Lies! Lies! Lies!" on one song, the stage is set. Settle in and take notes.

When we saw the band rip through a pair of sets in Seattle and Tacoma, WA two years ago, Brown told me that one of his daughter's teachers has a section on old Proletariat lyrics.

On the new album, the fourth song in the 13-tune offering, "Soft Targets," grips onto the gun-violence issue: “In your search for truth/  lies offer comfort/  lies blur distinction/  lies bury lies—cowardly/ vulnerable/ it’s easy when they don’t look like us.”

That teacher will definitely have to update his lyrics list.

Greg Antista and the Lonely Streets -- "Shake, Stomp and Stumble"

This nine-song set of rock/pop/country nuggets seems like the perfect soundtrack for day drinking and deep thinking.

It's Orange County, CA to the core, a survival story of those rooted in the '70s and '80s punk scene, leader Greg Antista notes in the band's press release. Bands like Joyride, Cadillac Tramps, Mr. Mirainga, Busstop Hurricanes and more are name-checked on the group's members' list and there's bits and pieces of all those units within this Primal Beat Records release.

The songs are hooky yet harsh on the lyrical front ("Holding on can be the hardest part" is one example on "Nasty Weather"). I can't help but find a strand of hope within the lines, however, that we can learn from these tough experiences. Life can be bleak at times, but even that "U-Haul" driving away might lead a person toward a brighter path.

I reached for my guitar and harmonica while listening to this record, which I haven't done for awhile. Thanks, Mr. Antista.
Posted by Andy and Cat Rose at 1:30 PM