Talk about giving the stage a proper workout. If those sturdy, bewildered slabs of wood could talk, well, they would be chattering non-stop with dazzling speech about a night that seemed plucked out of dreamland.

When JFA's rambunctious vocalist Brian Brannon zipped across the stage in the band's opening slot, we kept a firm eye on the teen mic-handler and smiled while the band belted out its raging, ragged punk fare.

We knew the tunes on JFA's debut "Blatant Localism" EP like the back of our hands and wedged our way up close like punk sardines in a combat-boot-crushed can for the quartet's set on March 12, 1982 at the Ukrainian Cultural Center on Melrose Avenue in Los Angeles opening for the mighty Bad Brains, Bad Religion and the Lewd.

Yes, that's me second from left in the crowd next to my brother Ed and friend John following Brannon's slippery stage antics in this classic photo by Alison "Mouse" Braunstein.

"I was 15 in the picture, wearing pinstripe trousers and wingtip shoes, because why the hell not?" Brannon told this blog recently about JFA's inaugural LA gig. "The thing I liked about those shoes was that they would really slide across the floor, so I would often get running on stage and just glide the slide for about 15 or 20 feet. That might’ve been how I ended up on the floor in that picture and knowing me, I may have stayed there when I fell, because what the hell?"

Brannon added that the Bad Brains' initial West Coast jaunt was a stunner for the locals and visitors from Phoenix (JFA) and San Francisco (Lewd).

"When they came on, nobody had ever seen anything like it before, a bunch of Rastafarians playing that tight, that fast and that powerful, blew people’s minds. And the energetic acrobatics of HR flying all around the stage was a thing to behold. West Coast punk rock was never the same again," Brannon said.

For Brannon, he spent some of his time off stage visiting with Dennis Danell of Social Distortion and witnessing the cops fuck with the punks outside.

On Danell, the JFA man noted: "He was a great guy. And I’m still sad to this day that he is no longer with us. One thing I remember about that first meeting, was we were standing there talking and he was drinking a beer, I think it was a Miller High Life. After he drained it, he took it and threw it on the floor, breaking it. I remember thinking it was the most punk rock thing I had ever seen!"

Following the Lewd's solid set in the two-spot, the cops crashed the party and threatened to pull the plug on the gig because of some alleged problems with the punks outside. After a long wait, and much worrying that we wouldn't get to see the Bad Brains, things were sorted out and the cops dispersed.

Bad Religion then ripped through its set of favorites -- I believe the brilliant "New Leaf" was in there -- but most of us were already leap-frogging the locals' time in the spotlight and eagerly awaiting the Bad Brains' appearance.

We'll let Brannon, fill us in about what he experienced outside:

"Somewhere in the middle of the show, I decided to take a walk outside to get some air. I turn the corner on Melrose, and there were cop cars lining both sides of the street with flashing lights on as far as the eye could see. Cops in riot gear were rounding up stray punkers and beating the shit out of them," he said.

Like any brazen 15-year-old punk would, Brannon felt the urge to stroll through the chaotic shit-show while smoking a clove cigarette.

Brannon continues his narrative: "At some point, I think I figured out it wasn’t probably the best idea, and right then, a police officer came up to me and said, 'How old are you, boy?' 'Fifteen, sir.' 'What are you smoking there, boy?' 'A clove cigarette, sir.' 'Well you better put that damn thing out right now or I’ll shove it up your ass.' 'Yes, sir,'" he said.

"So I put the damn thing out and went back in to the club and went in to watch the rest of the gig. Good times."

It was for us as well, and I'm blown away by Alison's photo, which was recently unearthed after all these years. We're youngsters here -- ages 15-17 -- and holding our own right in the middle of the action. It was a packed auditorium and things got especially frenetic when the Bad Brains owned the stage, but we went with the flow -- much like the music's abrasion and melody that often snuck in there -- and endured some bumps and bruises while singing along and jostling for a prime spot to gain the full effect of the spectacle laid out in front of us.

This was just one vital stop on our journey, which continues to this day. 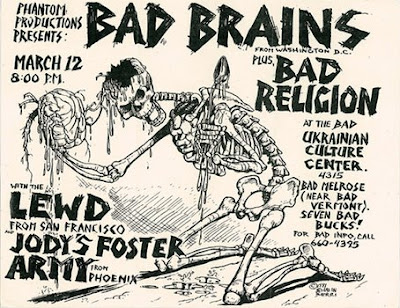