Who can possibly forget the ultra-energetic singer who flew so high that the local air-traffic controller should have been on duty? Hell, set up a landing strip on the stage, right?

That's SNFU's Chi Pig for you and the wiry Canadian frontman let loose an unforgettable presence when the band tore up the stage. And those fucking vocals can best be described as a melodic snarl laced with whip-smart lyrics that were drenched in a vast sea of humor.

One of my favorite gig memories involved SNFU, Corrosion of Conformity, Bl'ast! and Honor Role (the Meatmen didn't show) at a belter in 1987 at The Skate Palace in Oxnard. After the show, the SNFU guys grabbed a bunch of hockey sticks out of their van and I joined them in smacking balls against a wall, until one of them broke a window and they bailed out of there.

It's a night that will forever be etched in my memory.

A few years ago while we attended a Piggy gig in Vancouver featuring Ron Reyes on guitar, we spotted Chi in the crowd and were stoked that he was nearby. I now kick myself for not chatting with him and buying him a beverage. Rest easy, high-flyer. 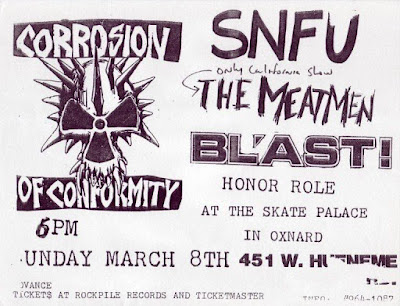