I can envision Clifford Dinsmore smashing that blue plastic milk crate to bits all over again.

But this time it involves 10 times more anger than before, with his roaring vocals threatening to level anything in his way.

The former raucous scenario occurred in the summer of 1986 when Bl'ast! raged through its set at some club in New Haven, CT, during a gig with Corrosion of Conformity, DRI and locals Evil Dead. At that wild moment, I rushed forward to unleash a long-winded scream into the microphone.

Fast-forward to today and Dinsmore is still pummeling away as the singer of Seized Up, which formed in Santa Cruz, CA, last year and also features a formidable cast of Fast Asleep guitarist Danny B., Good Riddance bassist Chuck Platt and The Distillers drummer Andy Granelli.

A trio of shows rattled some heads when bands could still plug in. Come Oct. 9, Seized Up's debut record "Brace Yourself" will bust through the doors on Pirates Press Records.

Here's an email interview with Dinsmore about what's brewing in the Seized Up camp.

** How did you guys all get together? Was it something on the wish list for a while or did it just happen organically?

I was really into Fast Asleep, and when I went to see them, they broke the news to me that the band was done. Chuck and Danny said they were forming a new project and wanted me to sing. Shortly after, they recruited Andy and the chemistry really gelled and mutated into Seized Up.


**The sound is obviously ultra-fierce. What's it like when you strap on the instruments and let loose? A pretty cathartic experience?

Like I said, the chemistry is really there, so when we unleash these songs, there's definitely no holding back. It's balls to the wall all the way!


**What are you dealing with lyrics-wise? What needs to be addressed with an apocalyptic backdrop of noise these days?

With the release date being so close, I don't want to take away from the impact by disclosing anything. However, I will say that the lyrics definitely reflect this fucked-up time period in a very appropriate way.


**How did the shows go when they were around? Wild stuff? How did the crowds react?

Well... we've only played 3, great time to start a band, right?!!?  The shows we did get to play were complete mayhem and totally off the hook and we're really looking forward to getting back out there.


**We've heard the unhinged, glorious "Manic Decompression," what's your reaction when that song blasts back at you?

Well, it is what it is... complete "no holds barred," out-of-control hardcore in its purest form. If you like that song, the full length is definitely gonna knock you on your ass.


**Do you feel you captured your sound well in the recording studio? What are people in for when they hit the play button?

For sure! Paul Miner did a great job and really captured our sound. We were really well rehearsed and went in there ready to throw down! We did the whole thing in 3 days. Andy was on tour with The Distillers and only had one day to do all his drum tracks...11 fucking songs in one day and he nailed it. I think people are going to enjoy this record... kind of a beam of light in an otherwise dark and dismal time period. 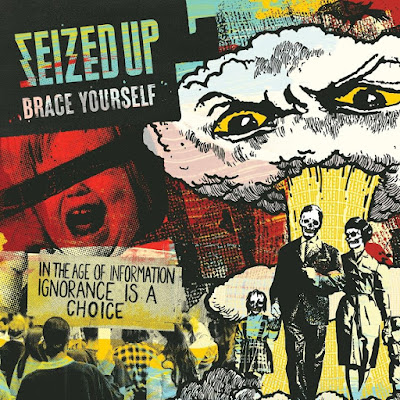