'Something Better Change': New DOA, Keithley documentary in the works

We've seen Joey "Shithead" Keithley do it all.

From playing a toilet-seat guitar, to swinging a chainsaw on stage, to banging out tunes on an acoustic six-stringer in a bookstore.

In London, we saw the mighty DOA share the stage with Rudimentary Peni in 1993. In Los Angeles, there were gigs with Black Flag, Circle Jerks, Bad Brains and more in '81 and '82. In Seattle, they paired up with the Fastbacks for a rousing gig in '13. Those are just a handful of our DOA live experiences and we hope to add some more notches to our Shithead belt in the future.

You're always guaranteed a rollicking good time with DOA as they belt out the classics, like "Fucked Up Baby," "The Prisoner," "Smash the State," "General Strike," "Slumlord" and countless others, along with later songs, like "Marijuana Motherfucker" and "Just Say No to the WTO."

When Keithley cocks his head, hand-points, snarls and does a kick-spin with his old-reliable Gibson SG in hand, it's a blast.

Thankfully, the Burnaby, BC, Canada, man and his band will now be the subject of a documentary, "Something Better Change," which is in the hands of lauded filmmaker Scott Crawford ("Salad Days: A Decade of Punk in Washington, DC” and “CREEM: America’s Only Rock’n’Roll Magazine). Crawford will direct and team up with producer Paul Rachman (director of “American Hardcore” and co-founder of Slamdance Film Festival).

"Punk is actually a really progressive, like a really great force that could help change the world," Keithley said in the doc's trailer.

The 64-year-old added that people laughed at DOA when the Vancouver punks began kicking up a racket in 1978. Well, fuck the naysayers: DOA has always let its music and voices be heard while standing strong in its fight against racism, greed, war and sexism.

Keithley took DOA's slogan of "Talk-Action=0" into the political realm and narrowly won a seat on the Burnaby City Council in '18. The Burnaby Green Party member emerged victorious -- by just 215 votes -- along with seven other councillors who were all members of the Burnaby Citizens Association. Once again, Keithley stood out from the crowd in true punk fashion.

He ran for council because he believes in grassroots democracy where people have a say and input into what's going on, Keithley said in the trailer. The filmmakers tagged along with Keithley as he served on council, and they, of course, picked his brain about his DOA journey.

On Jan. 21, they launched a Kickstarter campaign at: https://www.kickstarter.com/projects/cra/something-better-change?ref=7fjt19&token=94384e72&fbclid=IwAR23GRkmLlqEHyLc966bZDrPsWUgEG8TOjuKtj5GiUY1hbrHSENtoJvtEI8

Below are some excerpts from our interview with Keithley in '13, who at the time was continuing his campaign for a spot with the BC New Democrats. He was running to be a Member of the Legislative Assembly (MLA), which is similar to a U.S. state congressman. He lost that nomination, but kept rolling with both DOA and his political aspirations. After an unsuccessful run for provincial office as part of the BC Green Party in the Burnaby-Lougheed riding in '17, he still kept plugging away.

You clearly can't keep a good man down, and Keithley finally bulldozed through the council doors three years ago.

-- How has being in a band all these years prepared you to jump into the political realm. Was it a good learning experience, a natural progression type thing?

Well, it made sense. People in Canada, and I think people in North America and in Europe somewhat know DOA for a political stance-- I'd really call it being a social activist. You know, kind of fighting for people power, that's kind of what I call it. So with people in BC, I'm really well known here, so it isn't like a big leap to do that, so it kind of fits because I've been kind of working on helping people with stuff, trying to help the regular person all my life. I guess another thing, too, is when I was 18, I went to university to become a civil-rights lawyer. Then DOA started, and obviously I never got my law degree (laughs) ... that goes without saying, right?

-- So is that when you first started getting interested in politics? When did it strike a chord with you?

It was actually when I was 16, Greenpeace organized this protest against testing of nuclear weapons by the U.S. military, and what was happening in the Amchitka islands, which are part of the Aleutian Islands chain of Alaska ... underground testing of nuclear bombs. So, Greenpeace urged all these kids in high school here, in different areas, to leave their school and march downtown Vancouver where the American consulate was and march around and protest. We did, we left the school, the principal tried to stop us with his arms across, trying to physically block us. That didn't work, obviously, and about a thousand of us marched downtown. An interesting thing about that was Dimwit -- rest his soul, my old drummer, who drummed in The Subhumans, The Pointed Sticks and The Four Horsemen -- he brought a bass drum that day, so he was at the head of the parade with his bass drum, beating as the students moved along toward the consulate.

-- If you could look into a crystal ball, how do you envision your future?

Ahhhh... (laughs) ... I wish I could look into a crystal ball. You just gotta keep trying to do what you think is right in life and carry on the best way you can, that's really the only philosophy I've really got is that you've got to believe in yourself and be positive. 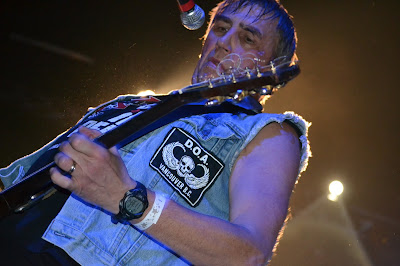 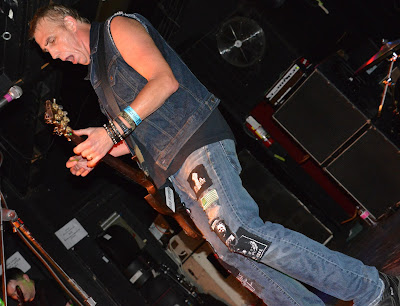