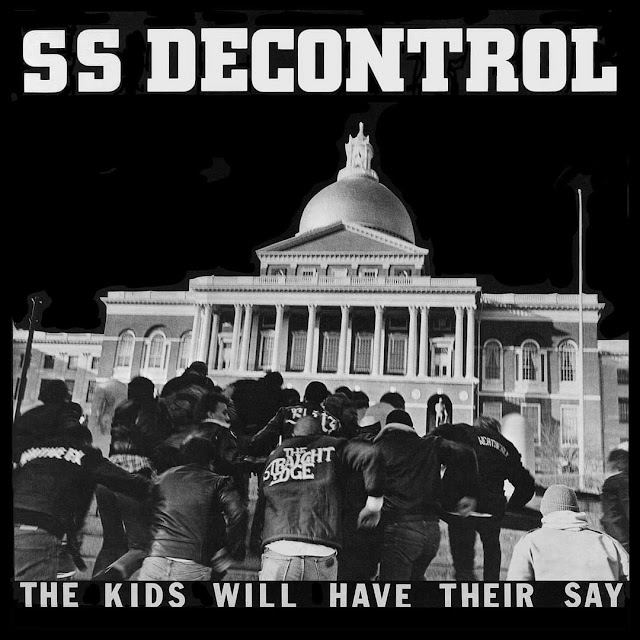 I wanted this record so bad that I called Zed Records and asked if they could hold one for me.

When I arrived the following day with my friend John at their punk vinyl wonderland in Long Beach, CA, some time in 1982, the Boston hardcore masterpiece was actually sitting behind the counter in a bag with my name on it. Zed usually stocked just a few copies of records, so they would often get snagged quickly. How cool of them to grab one for me before the vinyl hunters arrived.

Later that day in my Redondo Beach bedroom, the blistering sounds of SS Decontrol's debut album, "The Kids Will Have Their Say," burst out of my stereo speakers and we wildly nodded our heads in approval. We cranked that album copious times over the course of the afternoon while passing the lyric sheet back and forth. And, of course, that Phil N Phlash photo of the band in full rage mode would forever be embedded in our minds.

Now, 40 years later, the mighty Trust Records crew is finally giving the vital straight-edge album a robust vinyl rerelease treatment. The 18-song gem will be packed with a 20-page booklet of unseen photos, memorabilia and more and feature remastered audio and an inaugural appearance across digital platforms. The album is set for a spring 2023 release.

Says SSD mastermind and guitarist Al Barile in a Trust press release: "For the past 39 years, I've been looking for the right time and situation to rerelease the first SS Decontrol album. SSD fans have been asking for 'The Kids Will Have Their Say' since it went out of print 40 years ago. A few years ago, Keith Morris from the Circle Jerks told me about Trust Records, and it sounded like it might be a good fit. I talked with Joe Nelson about the record for almost two years and with each text, phone call and discussion, the fit came together. It feels like a perfect marriage."

Barile is joined on the album by drummer Chris Foley, bassist Jaime Sciarappa and vocalist Springa. The album unleashes equal parts power and precision and furiously marches along on a true HARDcore journey from the opener "Boiling Point" right on through to "The End." In between, you've got a constant stream of rippers like "Do You Even Care," "Fun To You," "Screw" and so much more.

SSD bends the mind with a three-minute hardcore/Joy Divisionesque amalgamation, "How Much Art," to exit side one. The title track begins side two with a fucking bang.

Foley's powerhouse drumming on "Headed Straight," for instance, not only throttled my speakers at home but my eardrums in a live setting, as well. As John and I hung out during SSD's soundcheck before a 1983 gig at the Sun Valley Sportsman's Hall, Foley put a few more cracks in the old building's walls with full-tilt reverberation while tearing through the "Headed Straight" intro to get his sounds right. Nailed it.

Speaking of Foley, he's excited for the album to make its way back into the music world.

"There had been so much talk about doing something, but it really had to be right for Al to want to do it. He’s done his homework and I think Trust Records will do a really good job with it. And it’s amazing to me that this is happening 40 years after the fact. It was a really unique time in American rock music. And it was such a grassroots kind of thing. Everybody was turning each other on with some new band," he said during a Facebook Messenger chat.

Foley recalls the band's three recording sessions that brought the album to life: "The first one was Oak Grove Recording Studios where it was so hot that the recording machine was slowing down and speeding up from the heat. The second place was in a guy's basement. The sound guy had to bribe his dad to leave the house. Dad didn’t want his house to be a 'noise factory,' as he said. The last place was Radiobeat Studios where a lot of the Boston hardcore bands ended up recording."

The drummer was a high school student when SSD formed and began playing, and he hit the age of 17 when the album was released.

"To say that the album helped to shape my formative years would be an understatement. The whole hardcore scene was such a big stepping stone in my life. And it turns out a whole lot of people feel that way, too," Foley said. "It’s a blast for me to listen to these old tracks. And it’s about time people have more ways of checking out the music that was going on then. And celebrating it with this 40th anniversary release of 'The Kids Will Have Their Say' is a great way to start."

Getting back to that epic SSD Sun Valley gig alongside Government Issue, Willful Neglect, Stalag 13 and the Patriots, we pointed at the poor stage and joked that it just might crumble as the Boston boys (with the addition of Francois Levesque on lead guitar) stomped all over it during their raucous set. Highlights were Barile leaping in the air and wildman Springa constantly on the move as if he was aiming to tread on every inch of the stage. It was controlled chaos at its finest.

In a full-circle moment the night before the Sun Valley gig, we hung out with Sciarappa and Foley at my house in Redondo Beach. John was pen-pals with Barile and he pointed the two SSD guys our way along with their crew of Andy Strachan (DYS), Tony Perez (Last Rights) and Jake Phelps (Thrasher editor, RIP). To that same bedroom where we first heard "The Kids Will Have Their Say."

For more information on Trust Records and the SSD rerelease and merchandise, visit https://trustrecordscompany.com/