If the Tractor's a rockin', don't go a knockin': Mudhoney did

We have seen Mudhoney so many times, we cannot even count.  In fact, they are the band that we have witnessed more than any other group, ever.

From the first time I (Cat) heard "You Got It", I was hooked, that was "my" song as it reflected my feelings perfectly for so many people, especially in LA where I grew up.  I wanted the cardboard cutouts of people in LA to "Keep it outta my face".  My best friend Bridget and I would check them out in Hollywood in the early '90s whenever we could.  Then when I moved up with Andy to San Jose in 1992, we saw them many times in SF.  This pattern has obviously continued since we moved to Seattle in '97.

So when they were going to play at the Tractor Tavern with the undeniable Tom Price Desert Classic opening (with Unnatural Helpers and France's Non! rounding out the bill), we were there.  Unfortunately, when we looked at the add online the night before, we saw that it said this show is "Sold Out".  Normally we would be more on top of it and maybe get tickets early, but we were on vacation and out of town a lot and it just slipped our minds.  Also, I guess we just thought it would not sell out as it is not 1991.  So we had to go the Craigslist route, and luckily that worked out as we did not want to be denied "This Gift".
Tom Price Desert Classic opened with their garagey sounds with a Seattle twist to the gathering crowd. Their catchy and raunchy songs fall along the lines of The Sonics to Price and fellow guitarist Don Blackstone's former band Gas Huffer. Midway through the band's set, a corkscrew-haired, spectacled friend tossed a $1 bill on stage ... and Blackstone swooped on it, shoved it in his mouth and chewed on it. He soon spit it out onto the drummer's kit. If he would have swallowed it, what would he have "cashed out" the next morning?: four quarters, 10 dimes ... or God forbid, 100 pennies. But we digress, let's move on.

By the time Mudhoney hit the stage, the place was packed and the crowd was ready to roll. "Here Comes Sickness" came first, and then Cat's fave "You Got It," followed by everything from "Suck You Dry" to "Tales of Terror." And they couldn't leave out the covers "Hate the Police" (Dicks) and "Fix Me" (Black Flag) in the encore.

Following Mudhoney's raucous concert, our new pal Klaus was one happy man as he was pleased he maintained his spot the whole show at the front of the stage near guitarist Steve Turner. Sporting a classic "Loser" Sub Pop T-shirt, he recalled seeing Mudhoney at the Central in Pioneer Square back in the day. To bookend his Mudhoney experiences, Klaus snagged the band's setlist and toddled off to greet a friend.

Of Note:  Prior to the show, we saw someone committing the ultimate faux pas, wearing a Mudhoney shirt to the show...in the words of the movie"PCU"--don't be that guy. 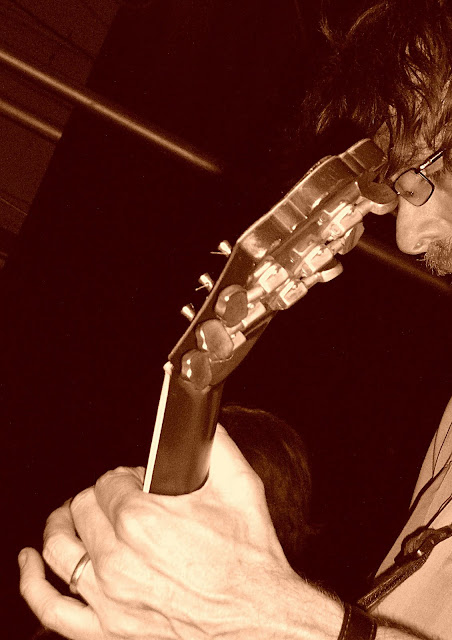