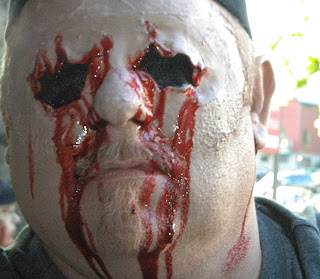 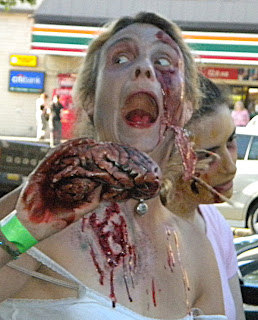 Horror flicks are our thing, and zombie movies are number one on that list.  We will see almost every zombie movie, and we also dig zombie books ("Breathers," "The Zombie Survival Guide", etc).  In fact, when we were first going out, I bought Andy a "Night of the Living Dead" T-shirt, which he still sports to this day.  So the Red White and Dead Zombie Walk in Seattle is not to be missed.  We were going for the Guinness World Record and ended up beating New Jersey, who previously held the title.  The final total on July 2, 2011, was 4,522, beating New Jersey by over 400 dead walkers, according to culturemob.com.

There was every type of zombie you can imagine, from zombie Jesus to a zombie pot-belly pig (which was adorable by the way).  Here are a few of our favorite pics. 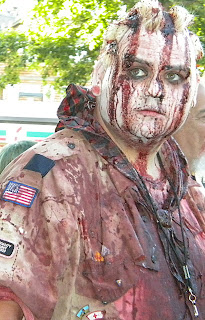 One thing that our group of friends had to say was "what is up with the music?!"---I know that everyone seems to now associate zombies with "Thriller", but come on people, zombies have been around for decades before that.  In our opinion, the music should be more in the death- or doom-metal realm, horror punk, goth or at least creepy music like Goblin from "Dawn of the Dead" (the Misfits would be perfect).  Any of that would have been better than the uninspiring dance-type music they had on hand. It just goes to show that when in the masses, even zombies lack musical taste -- maybe they should just stick with the taste of brains.  Either way, it was still a blast. 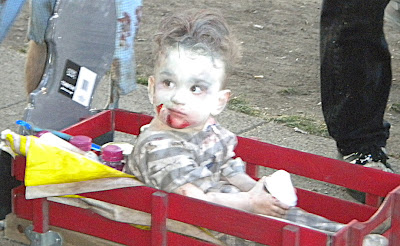 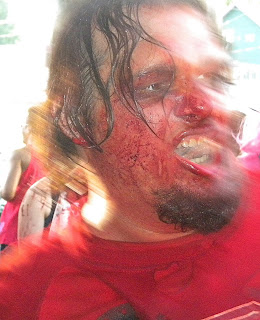