No Labels: Putting Raleigh, NC, hardcore on the map ... call it 'No Core'

"We didn't have any real motives to start the band. We just wanted to be hardcore punk rock stars."

So, with tongue firmly planted in cheek -- I think so! -- pummeler of drums Reed Mullin describes his band No Labels in a handwritten interview delivered to my Redondo Beach, Calif., home from his pad in Raleigh, N.C., in 1983.

Years later, his other band, Corrosion of Conformity, found blazing success on both the punk and metal scenes (and they're still putting the BANG in head-bang today) .... so it appears our man Mullin was right all along. 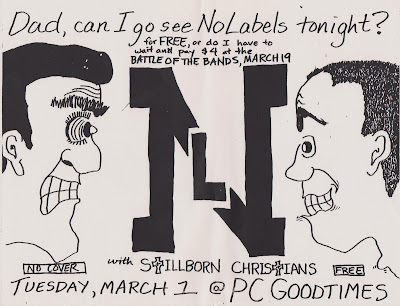 I got on board with these guys while scrolling through an issue of Maximum Rock and Roll in '82 and spotting an ad for the "No Core" compilation tape. I jumped all over it, sent my $2 to the NC address and soon received my tape. I was riveted by the early COC style of Black Flag meets Black Sabbath. No Labels was a fave of mine, as well, with their straight-forward yet quirky hardcore style. No Rock Stars and Colcor were great, too, with their punk stylings.

Mullin kept me in touch with the NC scene with fliers, demos (A Number of Things, Stillborn Christians) and magazines. I secretly wished I could move there because I felt I was part of the scene. No kidding.

With No Labels, Wayne Kerr's (real last name Taylor) energetic vocals grabbed you from the start and took you into the band's world of lyrically tackling: "The hypocrisies and unpleasant or mindless side of 'punk,'" Mullin explained, adding that they also wrote about, "Oooh meaningful things like compromising one's actions for dumb reasons or people changing and about how your body is just a shell that holds your actual existence." 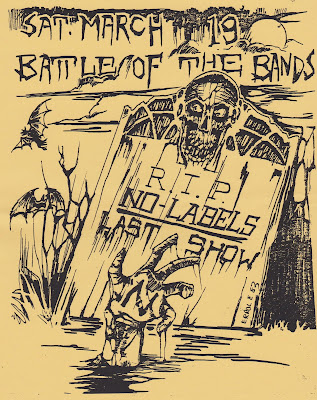 The band formed in March '82 with Mullin on drums, Ricky Hicks on guitar and a few other guys who didn't last long with the unit. Enter Taylor on vocals and Woodroe Weatherman on bass (you might know this dude as COC's guitarist) and the band got rolling, playing with everyone from local bands to Husker Du, Minor Threat, Circle Jerks, Dead Kennedys, DRI, Suicidal Tendencies and Faith. They also played out-of-town gigs in Richmond, D.C., Boston, Pittsburgh, Harrisburg, Philadelphia, Baltimore and NYC.

One DC show, in particular, would have a lasting effect on Mullin and spur him to write the lyrics to "HarDCore." The song used DC as an example of any scene one might encounter where punks "maybe had some 'holier than thou' disease," Mullin said.

The lowdown: "When I went to DC for the first time to see a show (UK Subs), I didn't have a 'different' hairstyle and dressed pretty normally. Anyway, I was really excited being in the East Coast's 'punk Mecca' and tried to meet people. Everyone I talked to was really snobby. Well, when I came back to Raleigh, and being in a 'hardcore punk rock band,' I decided to write a 'harDCcore punk rock' song. The song (is) more of pointing out the few 'territorial morons' I met."

And the name No Labels? "Our singer thought up the name while pulling the stripe off his Nikes. That's all," Mullin said.

﻿
﻿I missed out on the No Labels live experience, but when Taylor and Hicks traveled with COC together once to LA, I asked for a No Labels reunion, at least one song, but it wasn't to be.
You can read more about No Labels and the NC scene in Brian Walsby's fifth Manchild book, titled "Rabid Pack with Sirens Howling." There's plenty of cool cartoons, pics and interviews in there. To order: 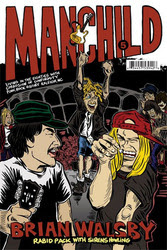 http://www.bifocalmedia.com/index.php
Walsby's blog is solid, as well: http://introvertedloudmouth.blogspot.com/
Posted by Andy and Cat Rose at 3:28 PM