Do you remember Husker Du?

Answer: How can you forget them?

We at There's Something Hard in There conducted a poll on our Facebook page, asking readers to chime in with their favorite Husker album. Cat went with "New Day Rising," and Andy tagged "Everything Falls Apart."

Here's a few comments from our voters:

* It seems unfair to pick against most of these albums, but "New Day Rising" gets my vote because it completely opened up the Husker Du catalogue to me. (Mike McNulty--Waltham, Mass.)

* "Metal Circus" for me, although impossible to choose really... but I really like the guitar sound on "Metal Circus." (Simon Way --town unknown, but he's a guitar-pedal aficionado)

As a bonus, here's some of Andy's Husker reviews from his high-school and college papers from back in the day... remember, this was a long time ago, so forgive any mistakes. Enjoy.﻿ 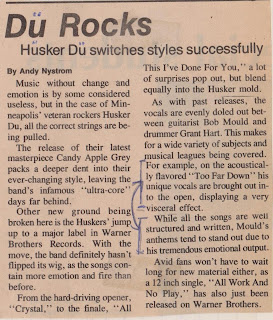 Check out our other Husker entries:

http://theressomethinghardinthere.blogspot.com/2011/06/grant-hart-handful-of-husker-du-songs.html
Posted by Andy and Cat Rose at 1:19 PM