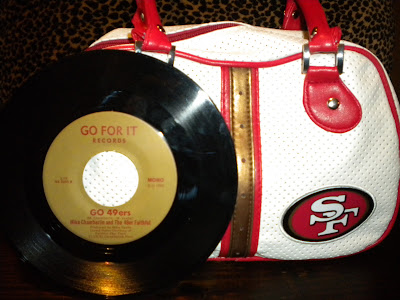 For the Niners finally having a kick-ass winning season, I received a new Niners bowling-bag purse to sport my loyalty. After the many years of pain that have followed us Niners faithful, it feels great to pull our heads out of the sand and stand proud.

Not that I didn't represent, anyway, but I have to admit that my Alex Smith jersey hasn't been seen for a while; it has been tucked away in the back of the closet. Andy got me that jersey in 2006 when he had a decent season (more promising than the previous two years anyway), and at least beat the Seahawks both times=bragging rights for us up here in Seattle. The jersey emerged this year and was welcomed back into the society of my wardrobe.