When the Fu Manchu guitarist and vocalist straps on his clear Dan Armstrong guitar, slashes at those six strings and furiously shakes his head -- sending his blond mane rocketing every which way -- there's some Black Flag pounding away within the walls of his band's rocked-out, punk-influenced tunes.

Equal parts Flag and Blue Cheer -- and tons of other bands from both genres hammered into the mix -- Fu Manchu has been at it for 23 years. Hailing from San Clemente in Southern California, Hill got his first taste of Flag via a live tape that a friend flowed his way in December 1980.

He's never looked back, and Hill -- along with guitarist Bob Balch, drummer Scott Reeder and bassist Brad Davis -- visited Seattle's El Corazon Jan. 14 to unleash Fu Manchu's "In Search Of..." record on the crowd, along with a host of other Fu favorites.


Prior to the gig, I caught up with Hill in the comfort of the band's van for some conversation about his Flag guitar reverence and how Fu Manchu came into being. Hill and I both separately attended the Flag, Misfits, Vandals gig at the Santa Monica Civic Auditorium in '83. He also owns a copy of my old band Sorex's "Portrait of a Prisoner" EP circa '85 ... so that's a plus.

--Growing up and seeing some of those hardcore bands, what kind of lit a fire under you to start doing it yourself?

Just love hardcore punk-rock music-- loved it, loved it. I'd go see bands, and instead of skanking or stage diving, I was watching how the guitar player set up or how he tuned, fingers where they went-- that's how I learned to play guitar, just watching... 'Oh, that's it ...oh, he's got a tuner, that's how you put the strings on.'

I was like, 'What the fuck's THIS?' And he was, 'BLACK FLAG!' I was in junior high, and we had punk day: 'Punk is Bunk,' people wrote on their shirts. I was listening to Deep Purple, Blue Cheer, Nugent and stuff, and I heard Flag, and I was like, 'Holy Shit'... took the tape and didn't even give it back to him. I got turned on to the Adolescents, you know, went from there, Circle Jerks, and it was like, 'Oh Shit,' just bought everything I could, every zine, kept my fliers, wrote bands, just every dime I had went into buying records.

Let's see, Circle Jerks, Shattered Faith and Minutemen... in Riverside, out at the Ritz, I believe, that was January of '81. I snuck out of the house.

--What about some of those guitar players back in the day?

Ginn. Favorite record of all time -- 'Damaged'...everything about it is my favorite, so Ginn. Starts with Ginn, and then it goes Lyle (Preslar) from Minor Threat, (Greg) Hetson Circle Jerks, (Rikk) Agnew Adolescents. Any guitar player in any punk band that I'd see was automatically my favorite. (Also mentioned digging the sounds of Bubba Dupree from Void and Rob McCulloch from Negative Approach on record; SSD and Die Kreuzen get the nod of approval, too.)

-- So then you formed Virulence, and then you came to where you're at today. How did that whole sound come about?

We started Virulence at the end of '84, and we wanted to do fast Gang Green, just BEYOND FAST-- YEAH. Couldn't play that well, so we couldn't get that fast, so it was more like mid-tempo faster. And then mid-to-late '85, saw Bl'ast! live-- shit our pants, just like, 'Here we go, slow down.'
We were at the Balboa Theater (in Los Angeles) with JFA and Die Kreuzen...they were loading up their gear, two Armstrongs, and we're like, 'Holy Shit.' Even to this day, I listen to that (debut) record once a week: it's just a perfect fuckin' record, it just sounds insane, it's just an awesome record. (Mike) Neider does all our merch, prints all our shirts; we just played with Clifford's (Dinsmore's) band (Dusted Angel) the other night in Santa Cruz. We got to be good friends with those guys. 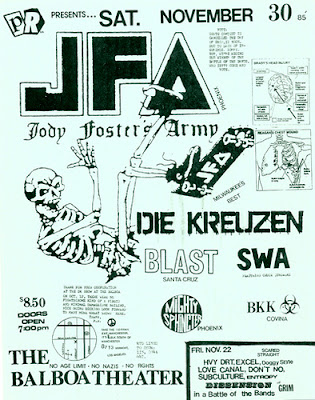 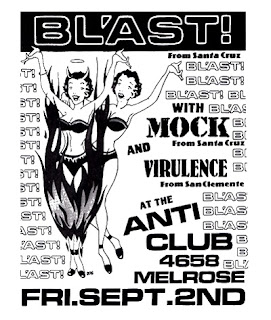 -- Probably dipped back into your old Blue Cheer records?

My buddy, we threw his down the street, his Deep Purple, Iron Maiden and Judas Priest. Way seriously, skipped them down the street. Mine -- I put in the closet, I put 'em in the back, I'm not gonna thrown 'em.
Yeah, started pulling out Blue Cheer. Then probably '87, started listening to a lot of Swans and Gore from Holland and late-period Flag. We slowed down. Melvins, and we're like, 'Oh Jesus, Melvins-- fuck.' (In '88-'89) Heard Tad and Soundgarden and Nirvana and stuff-- just went from there and we slowed down even more, used a lot of single-note, D tuning and still tried to mix it with our hardcore stuff.
And that's pretty much where we're at today, I just mix Black Flag, Blue Cheer, Deep Purple-- all the colors! (Nowadays, he listens to old hardcore stuff along with Blue Cheer, Black Sabbath and Captain Beyond.)


-- After all these years, you still gain that inspiration from listening to that hardcore stuff? It never leaves you, I play it all the time. The stuff that you grew up with, the stuff that really had that impression on you, especially in a live setting.

That's totally what it is. I'll put on that first DYS record, and just get some 'Yeahh!' -- just STOKED on it.

Yeah, that's the first stuff that just got me amped to wanna start a band. Almost every cover we've done is an old hardcore cover -- we obviously slow it down and stuff.


-- As an older and wiser gentleman, as we all are -- maybe sometimes-- how does it feel to still be kicking around and still doing your thing?

It's crazy. We started (Fu Manchu) in late '89. I had no clue we'd last this long. I didn't think I'd get to Europe or Australia (they go to Europe twice a year and are going Down Under in a couple of weeks). No clue we'd put out 10-11 records.
Slowing down a little bit, can't tour 8-9 months, I've got a 3-year-old daughter and don't like being away for too long.

-- What does your daughter think of the music? Is she a Fu fan?

Yeah (laughs). She's got her little pink drum set, I can play guitar with her. She wrote a song called 'Everyone's Odd'-- no words, she just told me that title; I was like, 'Let's go, there you go: perfect.'
She likes it. She thinks the pictures are funny with my hair flying all over, she laughs, 'Ah, ha.' I don't play our stuff for her, my wife does.
It's cool, I still enjoy it or obviously I wouldn't be doing it. We're not making millions of dollars, but it's just fun. I like getting in the van with everybody and going out for a couple weeks at a time. 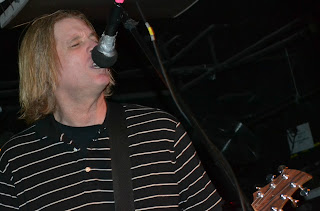 -- Music still speaks to you? Just as vital as it always has been? You could see within the hardcore scene or within whatever scene, people grow out of it and go on and do other things, but just something that hit you hard at first and has never kind of left?

Pretty much. I still get stoked: I'll pull out my old zines and still look at 'em to this day.
Even if I stop playing in a band, I'm sure I'll still be playing guitar, it's just fun.
I just like making noise. Very loud, distorted guitar I love.
Anyone that's heard our stuff knows that it's pretty much what you get with a Fu Manchu record: loud, fuzzy guitar. We don't go off to mellow land or reggae land or whatever -- just pretty much straight rock. 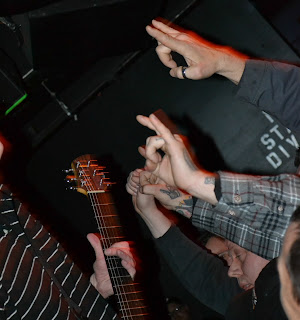