If you were around the Southern California beach areas of Redondo, Hermosa and Manhattan back in the early 1980s, there was a pretty good chance you saw some of the members of Black Flag hanging out.

When Henry Rollins rolled into town from Washington, DC, to take over vocal duties for Flag, he was easy to spot: first with a shaved head and muscles galore, and then a mane of hair and an endless supply of tattoos.

My brother, Ed, and I met Henry in 1982 at a gig in Hollywood and then began hanging out at the SST office on Phelan Avenue in Redondo. You could usually find Henry there, or maybe you'd spot him taking a long walk from his Hermosa pad up Artesia Boulevard to SST. Cat once sold him a greeting card when she worked at Guild Drug on Artesia, on the Manhattan side of the street.

On stage, Henry ripped it up, backed by Flag's pummeling tunes. It was everything punks could hope for in a band and singer. We couldn't get enough of it.


Following his time with Flag, Henry formed the Rollins Band and has been a non-stop, tour de force on the spoken-word circuit for many years. He's also authored copious books, acted in movies, and DJs these days on KCRW 89.9 FM (and on the Web) out of Santa Monica College.

His latest playlist included a variety of tunes from the Rolling Stones to the Misfits to Mississippi Fred McDowell (country blues) to Iggy and the Stooges to Ennio Morricone (composer for Spaghetti Westerns).

On the book front, he recently released "Occupants," featuring his photos taken in Bangladesh, Burma, Cambodia, India, Indonesia, Northern Ireland, Saudi Arabia and South Africa, matched with his no-holds-barred writing about these places.

Here's a Q and A via e-mail that I conducted with Henry over the last two days:


*You've traveled the world, speaking and playing with your band --  is there an interesting, eye-opening cultural experience or two that has stuck with you?

Of all the places I have been, it is perhaps Afghanistan that was the most compelling. I can’t get my head around how people survive there. It is a very rugged bit of territory and the people are extremely tough. In travels, I have seen a lot of people living in harsh conditions. How well they stand up to it is a constantly humbling thing. 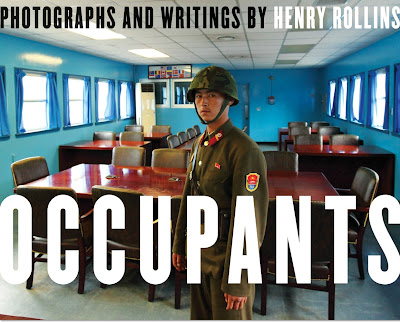 *What was your impetus for getting into photography and putting together your recent book "Occupants"? What did you learn from the experience?

I go to a lot of places and take a lot of photographs. As the years went on, I upped the level of my gear and ambition. One thing lead to another and I thought I would do a book. Coming from the DIY mindset, these things are possible, so I went for it. I don’t know what I learned from it. Perhaps the subtle art of color correction.


*Playing with Thin Lizzy and the Ruts have got to be some top moments. What were those shows like?

The Thin Lizzy event was good but sad. The more the band played, the more you were reminded that Phil Lynott was gone. It was like a rock and roll wake.

The Ruts show was very intense. It was a benefit for a man who actually played it, who died about 100 days later. The Damned were there, the UK Subs, all kinds of punk luminaries backstage, all basically saying goodbye to (Paul) Fox post show. It was a great event but very, very heavy.

(Editor's note: The 1996 Thin Lizzy show in Dublin was in honor of Phil Lynott, who died on Jan. 4, 1986 -- 10 years to the day of this gig.
Henry sang "Are You Ready?" with the remaining members of the band, and guitarist John Sykes introduced Henry like this, "We've got the meanest motherfucker in town coming up now, Mr. Henry Rollins -- come on Henry."

For the Ruts show on July 16, 2007, Henry filled in for original singer, Malcolm Owen (who died in 1980), in a London benefit for guitarist Paul Fox, who died of lung cancer three months after playing this gig.)


*What did you learn from being in Black Flag and the rigorous practice and touring schedule that came with it?

In my opinion, that’s the way you get your music together and make the live shows good. You really have to work. This is what Black Flag was all about. It was the Ginn/Dukowski method and it worked very well. It’s hard on the band but that is what it takes to kill it live. Being in a band, a real band with real ambition is a very hard thing to do. Most bands are not successful. They are usually not all that good and if they are, they rarely have the intensity to take it to the degree needed to get it over the wall. It will break you to pieces, so you have to deal with that.


*You've been friends with Ian MacKaye for 30-plus years-- what's kept your friendship going? What are the most important aspects of a solid friendship?

Ian and I have been for many years. He is my favorite person. We don’t see each other all that much. We live many miles apart and we are both very busy people but it’s always good to see him. We have a lot of shared history.

As to what makes a friendship work, I really don’t know. I don’t think about it. Ian is my best friend and that’s about as far as I think about it. I am not the one to talk to about building relationships, I am not all that good at it.


*You gave a Sonoma State University commencement speech a few years ago-- was that just as important of an event as any of your other speaking engagements? What was your main message to the graduates?

It’s important. It’s their day. You want to tell them something good but not take up too much time onstage. They want to be with their friends and family on this very big day. I think the most important thing was to remind them of their great achievement and hopefully encourage them to go out there and change things and make things better. That’s what I tried to do. The president of the university told me I did a very good job. I was nervous about it but I did it and was honored that someone wanted me there.


*When you're assembling your playlist for your KCRW radio show, what's your mindset? Is there a certain theme you're shooting for, trying to educate the audience with some rarities, or just having fun?

I am trying to make a play list that is fun and challenging. Hopefully, the listeners get their heads around something that’s a little different. It’s a way to communicate. Knowing that there are a lot of young people listening, I try to instill a little history and some things that they might not encounter otherwise.


*Who are the most inspirational musicians you've played with or seen play, and why?

Ian, certainly. I guess the one person who moves me the most is Iggy. There is something about when he is out there with the band that is more than music.


*Who was the most memorable person from the SST or Black Flag family, and why?

Chuck Dukowski would be the one for me. He’s a good man with a tremendous intellect. Greg Ginn was someone I learned a lot from. He was a person who taught me what not to do. Working in an opposite way than he did, I always pay band members in my bands all their royalties and publishing and don’t rip them off. Things are much, much better when you do it that way.

Very eventful and very busy.
Posted by Andy and Cat Rose at 8:21 PM