An Interview with Spot about his New Photography Book, 'Sounds of Two Eyes Opening' 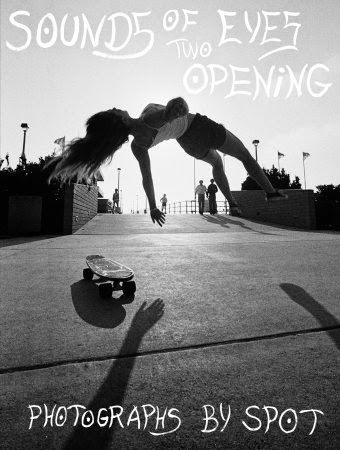 Posted on Nov. 29 in the Los Angeles Beat

Most LA musicians know Spot from his years working as a sound engineer and producer for bands like the Minutemen, the Misfits, and Black Flag. A talented musician, Spot also played bass for Panic, the precursor to Black Flag, and Nig Heist, a comical and super edgy band that bordered on performance art. These days he is doing the acoustic guitar singer-songwriter thing and performed to a packed house at last weekend’s Punk Rock BBQ.

Something people may not know is that Spot was also an avid photographer, even working for a time with the Easy Reader, the South Bay’s free paper. Sinecure Books has just released a collection of Spot’s photography, which captures the dichotomy that was the South Bay in the '70s and '80s, a juxtaposition of hardcore punk bands and girls with feathered hair skating on the Strand.

“Sounds of Two Eyes Opening” is a 272-page hardback “printed on matte art paper, with 4-color black-and-white printing and a lay flat binding.” It is available at record stores, bookstores, and Amazon. A special slipcase edition with extras is available online from Sinecure.

Spot was kind enough to answer a few questions for us. (Interview after the break.)


What years does the book span?

I started taking photos in 1969. My first camera got stolen in ’72 and I didn’t get another one til ’76 when I was living in Hermosa and writing for the Easy Reader. Then it became photo-journalism. I lost my darkroom in 1981 when Media Art closed down. But all that damn musical punkin’, rockin’ and sockin’ had happened and I didn’t have time or facilities for photography anymore.

Mostly color or black and white?

I primarily did available-light black & white. I was hugely into LIFE Magazine as a kid when they had some of the best photographers in the world working for them. Then in ’67 I saw the movie “Blow-Up” and I knew I had to try my hand at it.

What is our favorite place or subject to shoot?

There’s no definitive answer for this. I never really chose a specific thing to shoot but I seemed to gravitate toward action. Mostly, I just shot what was there. I will say that, aside from the journalistic style, I’m a big fan of guys like George Hurrell and that era in the '30s when Hollywood’s film and lighting guys were creating a whole wide world of grayscale and depth perception. Nothing like that exists today and it’s impossible to duplicate it digitally.

When did you leave LA?

I got out in 1986. I was sick of being stuck on the freeway and having to deal with everyone else’s problems. Had almost no time for myself. Went to Austin and had plenty of time for myself. It was great til all the Californians moved in and suddenly it was LA all over again. I’d had enough, sold my house and got out of there in early 2012. Been living on Lake Michigan in Wisconsin since. And, yes, on Nov. 10 folks up there do commemorate the wreck of the Edmund Fitzgerald.

Do you still take pictures?

Only with an iPhone. Still got my old Nikon system tho. Maybe one of these days I’ll find a way to get back into it.

Are there any stories in the book?

Other than the photos themselves? I have two essays in it and some notes, wisecracks and explanations in the back.

Why should people buy it?

Cuz it’ll make me feel like it was worth all the sleep (and skin) I lost creating the images in the first place. It’s photos of things that no one wanted to consider at the time and, for a long time after that, no one seemed to care. And, honestly, it might help me pay the rent.