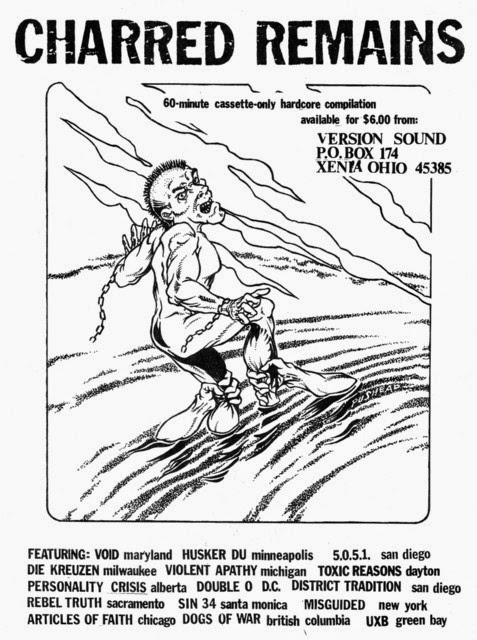 John and I had seen the ad in Flipside: Pushead's gnarly drawing of a Gollum-looking creature with a short mohawk who had snapped free from some chains (of society?) only to be gripped by a pair of tenacious hands, halted on his escape to a better world and yanked into the raging water. This growling dude is clearly not pleased with his situation, much as we weren't accepting what music was being lauded in our high school and on the radio.

We craved the Charred Remains cassette compilation that this grizzled beast was the poster boy for. Soon, it would be ours ... from the far-away land of Xenia, Ohio.

John sent $6 to Bob Moore of Version Sound and about a month or so later -- sometime in 1981 or '82 -- we were sitting in his bedroom in Redondo Beach and cranking up this 60-minute hardcore punk gem (as far as we could blast it on John's antiquated portable player).

John's parents or siblings would pop their heads into the room every once in a while to see what us teenagers were up to ... "There's no escape, now it's too late, Doomsday is coming, it's your fate," sang Riz of the Misguided... "I fear the common cause, I hide inside my attic, I bolt and lock the doors, I hope that I don't panic," offered Vic Bondi on Articles of Faith's "Ghost in the House" ... the roaring songs spewed forth again and again from that glorious tape player.

Thirty four years later, I believe John still has that worn-out tape, but he told me recently that he's going to track down the double-LP re-release of Charred Remains that our new saviors, Chris Minicucci and Rich Warwick of Radio Raheem Records, have unleashed on the world. It was transferred and remastered from the original 1/4" master tapes by Mark Dann.

The songs are ablaze like never before as they leap out of the speakers at you while you follow along with the 24-page reproduction of the original fanzine insert at your fingertips. 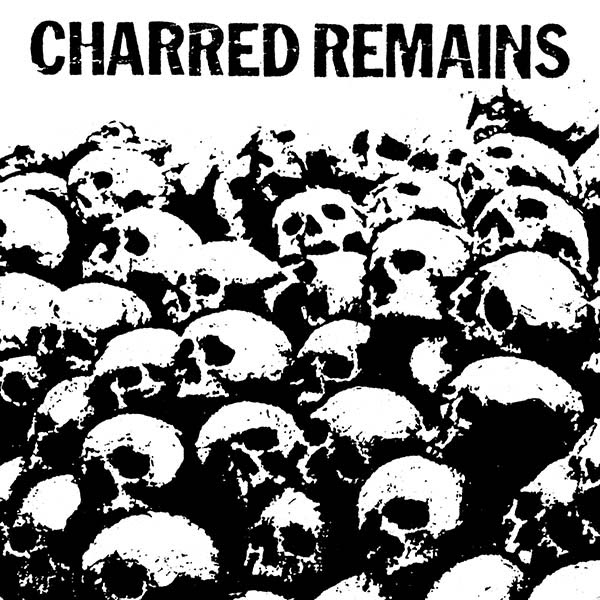