When the film started rolling, Scott Crawford was a bundle of nerves.

It was hometown premiere night and the writer-director of "Salad Days - 1980-1990: A Decade of Punk in Washington, DC" leaned forward in his seat and poked his head around the AFI Silver Theatre and Cultural Center on Dec. 19, 2014.

Ian MacKaye was there, someone whom Crawford interviewed for his Metrozine when he was 12 years old in 1984 and extensively for "Salad Days." What would MacKaye think of Crawford's work on the 100-minute documentary that features his bands Teen Idles, Minor Threat, Embrace and Fugazi and a wealth of other pivotal groups that put DC on the punk map? How would the other musicians included in the film react while watching the DC premiere?

Like when the pre-teen Crawford witnessed his first gig 32 years ago -- MDC at a Rock Against Reagan event in DC -- the grown-up was also anxious and thrilled at what was unfolding before his eyes, this time on the big screen.

"The DC premiere was pretty emotional for me. The folks that came were so supportive and happy and had great things to say," Crawford, 44, said in a phone interview last Sunday. "That whole night was pretty overwhelming, but it was all worth it when it was over. You're making this film not just for you -- you wanna make the city proud, but you also wanna make it for folks that weren't there. Definitely a night I won't forget."

At another "Salad Days" screening, HR from the Bad Brains was in the house and gave Crawford a thumbs up afterward.

"Salad Days" had its world premiere on Nov. 14, 2014 at the SVA Theatre in New York and continues to garner rave reviews each time it hits screens worldwide. Prior to his There's Something Hard in There interview, Crawford had a Skype discussion with a writer in Buenos Aires, Argentina, where the film is currently showing at the BAFICI Film Festival.

Cat and I checked out "Salad Days" on Feb. 27 at Seattle's Grand Illusion Cinema and I sported my Youth Brigade "Full Speed Ahead" T-shirt -- thanks to that band's drummer Danny Ingram -- for the occasion. While watching the film, my past flashed before my eyes, as I kept a close watch on the DC scene back in the day and ordered many Dischord Records releases that were delivered to my Redondo Beach, Calif., home -- some 3,000 miles away from the harDCore action. I saw Minor Threat five times in the LA area, the Bad Brains three times and witnessed a memorable Government Issue set, as well, so I got an in-your-face taste of the DC bands to go along with those crucial vinyl offerings.

The film is a victory for Crawford and for all of us music fans who appreciated what was transpiring in the nation's capital during that decade.

How could you not smile when bands like Marginal Man, Soulside, Black Market Baby and countless others get some screen time? And what about when Alec MacKaye mentions with a smirk about how people are still debating which side of the Faith/VOID split LP is best?

The interviews are insightful, intriguing and humorous, and as Crawford said, he was conversing with old friends so there's a natural feel to the documentary. The viewer feels as if they're in the same room and part of the discussion. Another triumph.

Crawford worked on the film every day for 3 1/2 years and was joined on the journey by Jim Saah, director of photography, who snapped countless stellar photos of early DC bands. The total budget for "Salad Days" was about $45,000 and Crawford received financial help from more than 900 Kickstarter contributors.

The whole experience has been a labor of love for Crawford and he hoped that it would resonate with others.

"I knew that it was really special. Obviously, that period of time was huge for a lot of people, including me, and the music really meant a lot and it was a big deal, at least in my mind," he said. "It wasn't really until the Kickstarter campaign until I realized that maybe I was on to something.

"If I had it my way, I'd do a documentary on every single band that's in the film. The whole experience has been so satisfying on every level -- and therapeutic (laughs)."

As the years ticked by, Crawford kept plugging away by interviewing 100 people -- he noted Ian MacKaye, Henry Rollins and Mark Anderson of Positive Force as particularly engaging discussions -- and developing his storyline, which featured his and others' journeys through the years on the DC scene.

Crawford knew all his hard work would come to fruition.

"I never felt like it wasn't gonna come about, there was never a moment where I just said, 'I can't do this.' It was always just pushing ahead, pushing through whatever challenge I was dealing with on any given day, which at times felt a little insurmountable," said Crawford, noting that locating archival footage of bands from the 1980s was an arduous task in the filmmaking process.

While his film was in the waiting room, so to speak, Crawford reflected on his past and used one particular instance as inspiration.

"I did refer back to this one thing that Ian MacKaye said to me, first time I ever interviewed him. He was talking about just what a mess (the DC hardcore scene) was and he was pretty disillusioned. He wasn't in a band, it was right after Minor Threat broke up, and I remember him saying that HR had said to him a few years earlier: 'Ian, you know, when this is all over, when the smoke clears, only the true rebels will stand,' and I think he was actually quoting Bob Marley.

"At 12, I was sort of like, 'I don't know what the fuck you're talking about.' But it's something I've thought about a lot through the course of my life, and I guess what I mean by that is: While you're doing something like this, there are a lot of outside voices or opinions or people suggesting you do it this way or that way or you're not doing it the right way. And I just kind of remembered that and I just kind of felt like, 'Well, you know, stick to your vision and when this all over and all is said and done, there's this document out there of this time and the only thing I can do is tell it the way I saw it or at least the things that I was interested in and stick to that.'

"When I came to that conclusion, it kind of freed me up a little bit and I stopped trying to just make it everything to everybody." 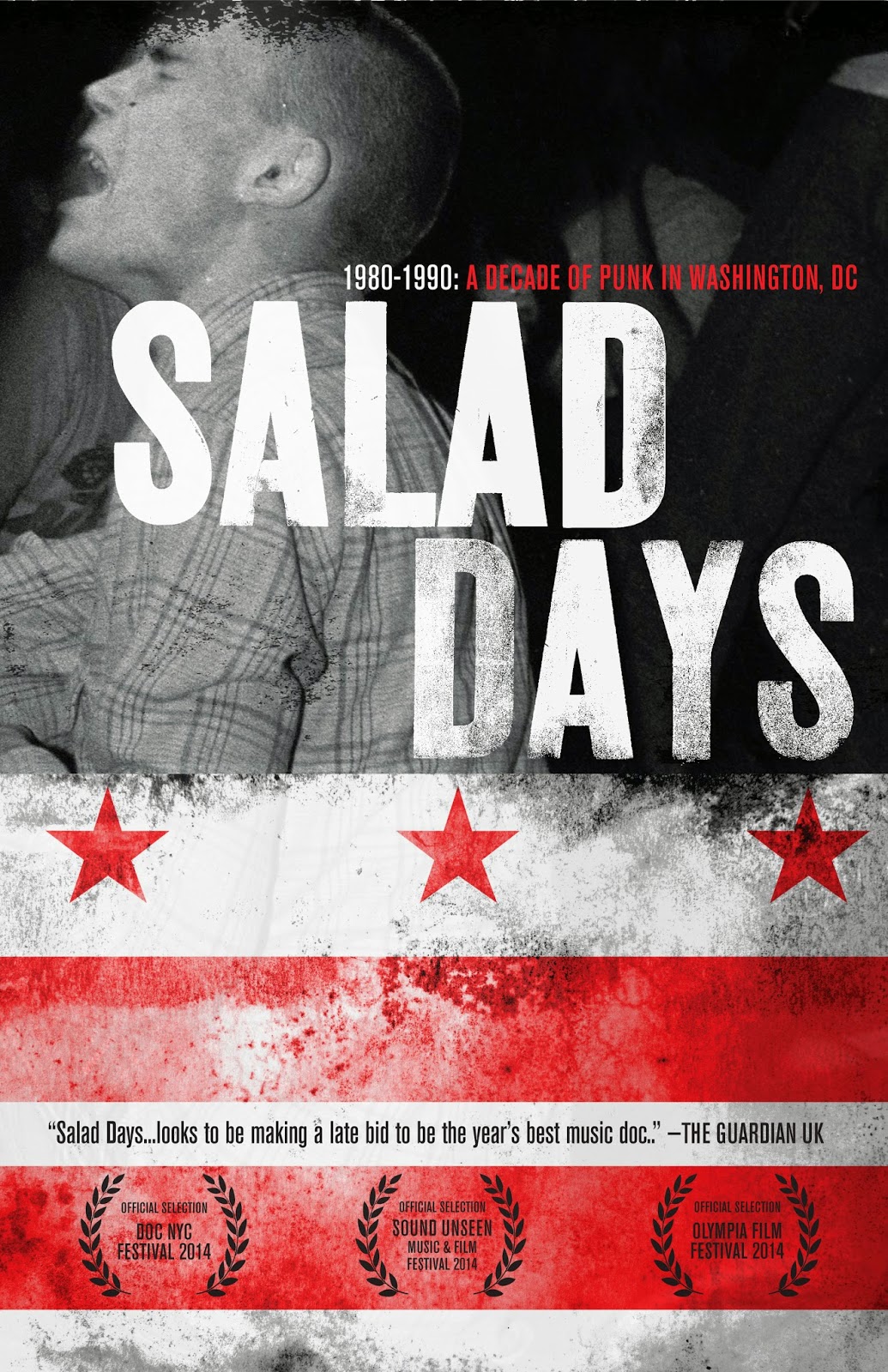 When "Salad Days" was released, the emotions began to flow, not just for Crawford, but for the movie-goers, as well. While attending screenings and participating in Q and A's, Crawford said people have given him heartfelt, positive feedback about the movie and the music that has influenced their lives.

It's been a surreal, out-of-body experience for Crawford, who feels he's come full circle in his excitement of discovering the music at age 12 and sharing this documentary with people with equal elation. Perhaps there's a 12-year-old out there on the verge of plowing through their parents' record collection, blasting some Rites of Spring and sharing lyrics from "For Want Of" in their poetry class.

Speaking of pivotal DC songs, 3's "Swann Street" closes out the film and stirs the emotions all over again.

"Well I don't care how picturesque or incomplex your life gets; the ground's un-solid don't forget to keep your ear to the ground," it goes, as Geoff Turner belts out the melodic vocals while 8-millimeter footage rolls of Positive Force outdoor gigs in Dupont Circle, with bands playing, carrying their amps from the van to the stage and audience members dancing and laughing.

"That song has given me goosebumps since 1987, so I knew all along, before we even shot the first interview, that that song was going to play a major role at some point in the film," said Crawford, noting that the footage had gone unseen until someone gave it to him and he kept it under lock and key until the film's release.

"When I saw that 8-mm footage, I said, 'Jim, we gotta put 'Swann Street' over top of that. That's the fucking end of the film right there. We had the end of the film for like two years. I always felt that that song should have been a huge hit," Crawford said. "I get emails almost every day from somebody saying, 'What was that last song? I love that song.' So it's nice to know that I wasn't the only one that felt that was a great song (laughs).

"You put it with that footage ..." Crawford reflects, looking for the perfect connector... "To me, it was just so powerful and I was hoping that others would feel that way."