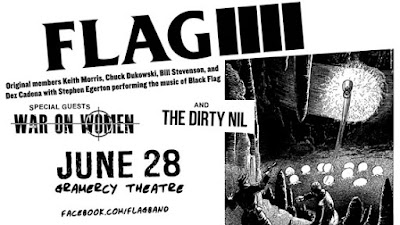 FLAG last night at the Gramercy was easily the best live performance I'd ever seen of FLAG OR Black Flag. I caught up with Dez and expressed the fact. The tracks he sang toward the end were that of an unhinged BEAST. “I’ve Heard it Before” stood out and gave me a tear because that was my friend John Stabb's fave track.

Dez and Stephen's guitars were probably PURPOSELY a little dissonant and it was CHILLING at the kickoff of “My War.” The sold out show exploded at 10 p.m. and it seemed to me that it was 1982 all over. Bodies all over. Tense shuffling spinning crowd, jumping up, against or all over. No let up with the energy until the last note. I'm pushing 50 years old but I managed to dance my balls off in the back, or pogo somewhere at the cusp of the pit.

“Clocked In” got a huge response because well, we have to be up early. No one cared at that point. A few thousand people all in it together. Arms around people we don't know, but were singing together. We live these songs with each other. Plenty of stuff from “Damaged” with the Keith vibe pre Rollins. Song after 2-minute song after 2-minute song with little or no rest. I was a kid again and the mosh pit was akin without anyone being a dick. FLAG have outgrown the Gramercy and will be sure to hit PlayStation Center next.

Stephen Egerton NEEDS to be in Rolling Stone's 500 top guitarists. I'm going to sleep for a week. It's so ironic that eventually, Greg Ginn's legacy will come by way of someone who plays his guitar style equal or better but with much more mania AND discipline. Everyone knows and loves these sentiments. And a lot of younger kids getting the education they desperately need.

It should also be post noted that seeing Black Flag live in the ‘80s, there were moments where my breathing became scarce. Well it happened again tonight. I had to sit down and rest a few times. So glad to see Bill and Stephen with quality time. Met Keith for the first time and Dez too. This show will be LEGEND.
Posted by Andy and Cat Rose at 11:16 AM