Digging into the '80s grave for Misfits memories 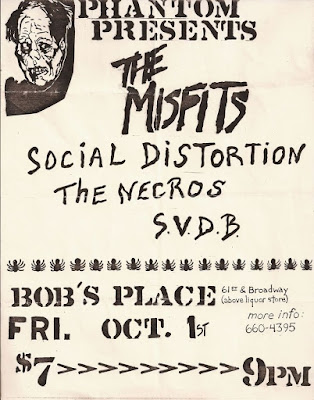 All hell will break loose -- again.

Coming off their triumphant and ghoulish return to action at Riot Fest in Denver on Sept. 4, the original Misfits are no doubt sharpening the spikes on their outfits and their tunes to pummel the masses again at Riot Fest in Chicago next Sunday.

That's two Sundays. How does God feel about the devilish crew taking up his day?

Anyway, I witnessed a trio of Misfits gigs in 1982-83 in southern California and I'm delivering some memories of those events.

Since we knew Henry Rollins and Dave Claussen from SST a bit, me, my brother Ed and buddy Pat Hoed lurked around the Misfits' van with them as Glenn Danzig consulted with Rollins about songs to put on their setlist for that evening's show, which took place in a room above a liquor store in a sketchy area of LA.

Nearby in the parking lot, the Necros guys were hanging out and we chatted with them about their tour with the Misfits and Midwest hardcore, which we were huge fans of. Drummer Todd Swalla later manned the kit for the original Misfits' last gig of their initial run on Oct. 29, 1983 in Detroit.

While we hung with the Necros, our jaws nearly dropped to the ground as we watched Doyle and Jerry Only hoist their amps over their heads like toothpicks and walk them into the venue. No problem there, and I laughed out loud when I read the recent the Rolling Stone article where Only said he was looking forward to going home to write songs and lift.

The show itself was a blur of energy onstage and mayhem in the crowd with a small, but wild pit of slamming bodies and arms and voices raised during the sing-a-longs. There was no shortage of shouting "whoa-oh-oh's!" on this night. I remember Doyle scolding a fan up front for getting too close and whacking into his devilock.

Recently, Necros bassist Corey Rusk and I discussed that show, in which he played with his broken leg in a cast, and he was stoked that I remembered it and said it was quite an experience -- not only playing, but watching the cops fend off the locals, who apparently wanted to scrap with the punks in the streets. We were safe, but I can't recall if there was any violence. 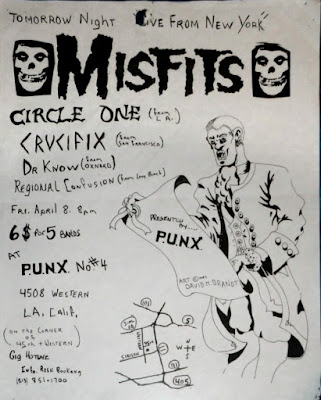 The Punx #4 venue was on the third floor of an abandoned building in yet another rough-and-tumble area of Los Angeles. My friend John and I went for it and had a hard time locating the venue at first. We circled the block several times, and just when we were about to pack it in, we looked up and spotted some punks hanging a mattress out the window with the word "PUNX" scrawled on it. Yep, that's the place.

After parking John's car up the street, we hiked up the stairs -- chuckling and half-believing that bands would play here that night -- and entered the main room, which probably saw its share of wedding receptions led by cheesy singers back in the day (Danzig would soon give that stage a proper workout). The place was well-worn in and had some cracks on the walls and chipped paint everywhere, but who's playing fixer-upper handyman when the Misfits are in the house?

One kid was set on adding a plethora of new items to his wardrobe by purchasing three or four Misfits shirts, and putting them all on at once. Super padding for the slam pit, for sure.

So, Regional Confusion and Dr. Know blazed through their sets and then John Macias from Circle One (also part of the promoting team) jumped on stage to inform the crowd that the cops and locals were having words outside. Apparently, the locals wanted to fight some punks. But the show went on and Circle One tore it up, leading into another raucous Misfits set, during which SST's Claussen and myself went arms-in-arms with Danzig to sing the chorus of "Night of the Living Dead." Fucking cool. Robo's flashing Misfits logo on his drumkit was a nice touch, as well.

Getting home would take some time. Following the Misfits' set, the cops ordered the crowd to stay inside the venue while they tried to clear the area outside. As we peered out the windows onto the scene below, there were sirens everywhere and we wondered how long we would stay cooped up in the building. It must have been about 45 minutes or so before things were sorted out and we were allowed to leave. 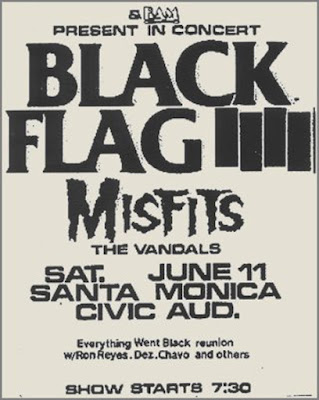 * June 11, 1983 at the Santa Monica Civic Auditorium; with Black Flag and the Vandals:

This was a big evening since some of Black Flag's old singers were to rattle their vocal chords to the band's songs once again, setting the stage for Rollins' own set at the end. Old pals Ron Reyes and Dez Cadena gave it a go and stoked the crowd, but Keith Morris was a no-show. Rollins hammered home his portion of the evening with emotion and rage aplenty, as if dozens upon dozens of nails were being propelled into the crowd.

But the Misfits, you ask? Well, another stellar set that they played at breakneck speed like we hadn't seen before. Rapid-fire stuff, one song after another as if they were playing a crazed version of beat the clock. If there were a timepiece on hand, the band would have smashed it to bits, just like Doyle and Only did with their break-away guitars before tossing them into the crowd during different parts of the set. People scratched and clawed for those guitar bits while the guys grabbed new axes and continued the musical onslaught.

All was well that night outside the venue. We wrapped up another Misfits gig, which would be the last one for me until Danzig made his way onto the scene with his namesake band and played the Country Club in Reseda on Jan. 6, 1989. I was joined by friends Marie and Donald as the band tore through some Misfits songs that night along with tunes from their debut LP. It was killer, to say the least. As a bonus full-circle moment, Hoed was there, too, working for Danzig at the time.

* Other memorable Danzig gigs included trucking 14-year-old cousin Eric and friend Dave to see the band on Sept. 30, 1990 at the Edge in Palo Alto, and watching Danzig alongside Cat on Nov. 8, 2008 at the Showbox Sodo in Seattle.
Posted by Andy and Cat Rose at 7:13 PM