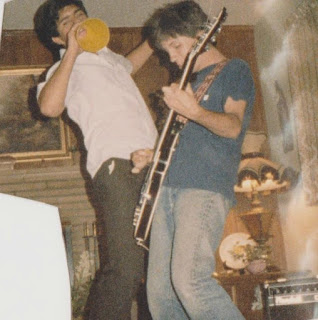 Senior year, beer and a living room waiting to be rocked.

That’s how things rolled on a Saturday night in Redondo Beach, Calif., sometime in 1984. John’s parents were gone for the weekend and a bunch of friends were on the way to partake in some partying.

We had spent the day bashing out some songs written on the spot in the garage and figured, let’s rip into ‘em for that evening’s entertainment. Let’s bring those punked-up jam-session anthems into the area where the older folks usually discussed the topics of the day and kids did their homework. Maybe the Christmas tree stood in the corner at one point.

Well, we were there to put our stamp on that room, crank the amps up and blow some life into that space.

I’m sure we weren’t the best band on the block, but who cares? A live group and some beer make things just right in my book. And we probably started to sound alright — even awesome — when many beers went down the hatches of our guests. I’d like to think so, anyway. (And yes, there was at one time, another band in John’s neighborhood; he played bass with ‘em and I sang their cover of “Drastic Actions” by Bad Religion.)

On this night, John hammered on his four string, I tried my best to make the guitar sound decent and Kurt — who cruised over after working his shift at the local market — yelled through an LA Kings megaphone that John grabbed from his bedroom. Did we have a drummer? I can’t recall. It’s all a blur now, but I know it was a blast.

That living room was our concert hall. The night was ours.
Posted by Andy and Cat Rose at 7:54 PM