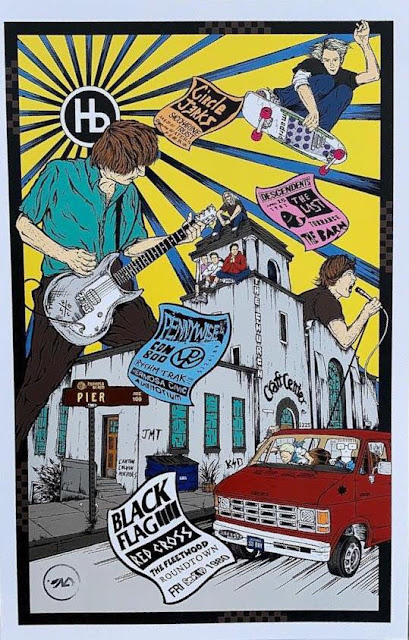 This story originally appeared on October 4, 2018 on the Los Angeles Beat site.

On Tuesday, October 2, 2018, The Hermosa Beach Mural Project unveiled Mural #8 of their ongoing project, honoring the “Punk Rock/Skateboard era of the 1970’s and 1980’s.” The mural is located on the side of a parking structure at 13th and Hermosa Avenue.

Local artist Dan Inez, who previously painted the punk rock utility box at Pier and Hermosa, centered the mural around the infamous church. Punk legends like Keith Morris, Greg Ginn and skater Mike Smith are depicted in the foreground while Fletcher, Jim, Byron and Jason from Pennywise sit on the church, all watched over benevolently by the Hermosa Beach sun logo. Actually, that may not even be Greg Ginn. I mean, you can’t even see his face. Maybe it is just a guitar player in the spirit of Greg Ginn. And he can’t sue you for that, right?

Bands namechecked on the flyers that flutter down the mural are are The Last, Black Flag, Saccharine Trust, CON800, Red Cross/Redd Kross, Pennywise, The Descendents (whose Milo caricature, originated by Roger Deuerlein, drives a van with the Circle Jerks skankster drawn by Shawn Kerri slamming in the passenger seat). Limited edition posters and tees are available for purchase.

Afterwards, a fundraiser reception was held at The Standing Room, Fletcher Dragge’s local burger place and Hermosa’s latest punk venue. Themes of some of the previous murals are volleyball, lifeguards, and Hermosa Beach West Coast Jazz (The Cadena name runs deep in HB music history). The project is not sponsored by the City of Hermosa Beach, unlike the punk rock junction box. The HB Murals Project relies on private donations and fundraisers.

The responses from the musicians featured in the mural has been varied. Doug Carrion of Incest Cattle and CON800 told The Beat, “Sometimes, local underground bands create ripples in the musical world that…change popular opinion. Hermosa Beach has a history connected to the counterculture. Music, surfing, skating, just pick one and you can find some element that traces back to Hermosa Beach.”


Paul King, a member of the early '80s Hermosa punk scene, feels that it is not so much an honor as it is a tombstone for the dead movement, "When the state sponsors (misappropriates, in my opinion) memorials to groups they actively oppressed and opposed, I find it offensive, not honorific. I call this genre of propaganda 'Tomb Stone.' It's a clear indication that the true threat of change or challenge to power from a movement is dead."

Many of the punk musicians honored felt that due to being hassled and beaten up by locals, and chased by cops, they were definitely not welcomed by the City of Hermosa Beach. So it is strange for them to now be treated as hometown heroes. It has been referred to as “revisionist history” by Nyx, a longtime Black Flag insider.

Janet Housden of Redd Kross explains, “All I can say is that I have very mixed feelings about that thing. The fine upstanding citizens of Hermosa Beach did everything they could to stamp out punk rock (I know because I spent my high school years being stamped on) and now it’s like they’re trying to take credit. Hermosa didn’t appreciate or deserve these bands. Personally, I feel like they should all go fuck themselves.”

In the dedication speech by Jim Lindberg of Pennywise, he acknowledges the irony, “I’m fairly certain that if you would have asked the members of Black Flag back in 1979 – – when they were playing a show at Polliwog Park – and local families were throwing food at them – – or when the cops were trying to chase them out of town – that one day almost 40 years later, they would be glorified on a mural in Hermosa Beach – I’m pretty sure they would have laughed in your face.

“But here we are today… and I can’t tell you how happy and proud I am – that it’s them on this mural – and not some banker or hedge fund manager – – because it’s these people, along with the guys playing jazz at the Lighthouse in the 50s, and the surfers and skaters, and the other “so-called” delinquents who truly represent the soul of this city.

“The songs of bands like The Last, Black Flag, Circle Jerks, Redd Kross and The Descendents were all about adolescent rage and rebellion, and not fitting in with the cool kids around town – and not wanting to – – it was about letting your freak flag fly. And many of them were violently ridiculed for it.

“They responded with explosive, -, ground breaking music, the definition of hardcore, songs about clashing with all the figures of authority constantly trying to rein you in – the cops, your parents, the church, your teachers, the rich jerks at school – anyone who tried to dictate how you should think, act or behave. It sounded new but it was good old fashion American rebellion against conformity. Their music gave power to the powerless – -and a voice to the voiceless. And it flew in the face of the status quo.

“The city council and the authorities back then probably didn’t like the noise they were making very much and some of them tried get rid of it like a bad rash – and now, today, decades later, we’re dedicating a mural to it, so I guess – Hermosa Beach, the jokes on you!

“Because this is why our little one square mile town is known everywhere we go. This is the true mecca for hardcore punk music, not New York, not London, not even L.A. – it’s Hermosa Beach…”
Posted by Andy and Cat Rose at 10:02 AM