One afternoon in the days of yore — 1985 — while browsing through the record racks at a predominantly heavy metal store in a Torrance, CA shopping center near Fuddruckers, my hands froze on a test pressing that read, Cirith Ungol.

I’d read Tolkien’s “The Lord of the Rings” at nearby Bishop Montgomery High School and recalled the moniker of the mountain pass in that novel. I was intrigued. I didn’t know a lick about the band, but slapped it onto my stack, which also featured Metallica’s “Jump in the Fire” 12-inch and the Replacements’ “Sorry, Ma, Forgot to Take Out the Trash” album.

Whilst I continued shopping, a teen named Eric strolled up next to me and began asking me questions about my record finds and what bands I was into. He said I'd dig Cirith Ungol's power metal, was stoked on my Metallica pick but hadn't heard any Replacements. That's what spawned our tape-trading days: Since he was mainly a metal guy, he made me some tapes of his favorites; and with me more in the punk realm, he got an earful of my top bands.

We met at the shop on a weekly basis and soon I had an unreleased version of the Exodus "Bonded By Blood" LP and raucous tunes from Warfare, Hellhammer, Bathory, Loudness and others. His hands were full of tapes by Minor Threat, Stiff Little Fingers, Negative Approach, Toxic Reasons, Squirrel Bait and more.

With my Walkman in tow, I usually grabbed a fabulous burger at Fuddruckers and blasted myriad songs before heading home to further inspect these bands sans headphones and at full volume in my room.

We attended a few gigs as well, with the Venom/Slayer/Exodus extravaganza at the Hollywood Palladium as the biggie. This gig was not only raging, but it also resulted in me finding perhaps the most apropos item ever on the dance floor afterward: a metal pentagram. We were actually searching for Eric's glasses, which were knocked off while we watched the bands up front.

With no luck on the glasses front, we trudged back to the car past the Cathay de Grande and heard that Raw Power would soon be playing inside. The Italian band smoked through its 23-song set to a tiny crowd. It's a pity that Eric couldn't see the action, but I did my best to describe what was happening.


Another rad show was 7 Seconds and Verbal Assault at Fenders Ballroom. The VA guitarist was on fire and I remember us leaving the show and praising his chops.

So where does this story take me to recent times?

Well, friends Ben and Diana rolled into town to stay with Cat and I in Seattle and, lo and behold, Cirith Ungol was headlining the Northwest Terror Fest at Neumos. Fucking brilliant!

Following sets by Spirit Adrift and Acid Witch, I planted myself near the front to take in the sounds of Cirith Ungol, my first time seeing them and it brought back memories of cranking those tunes all those years ago.

I lost touch with Eric long ago, but cheers for the tunes. 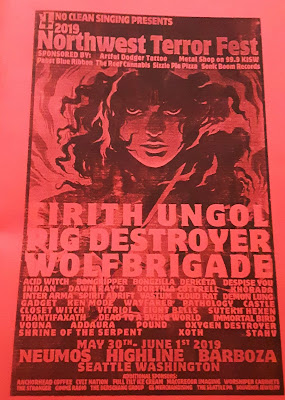 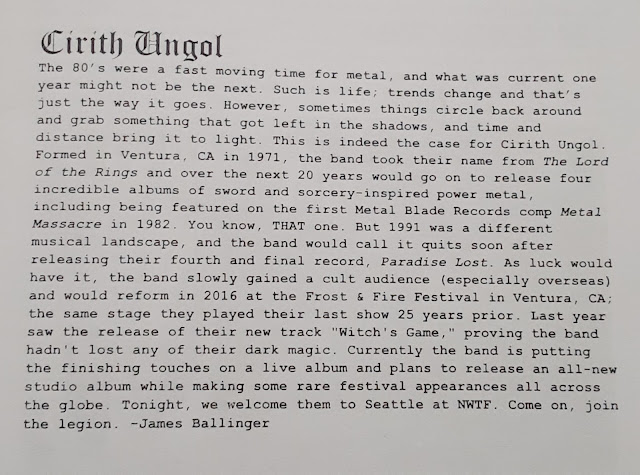