Skids blast through covers album, 'Songs from a Haunted Ballroom'

The Skids absolutely blast through the Ultravox raucous classic "Young Savage" to kickstart the Scottish band's upcoming covers album "Songs from a Haunted Ballroom." In fact, our ears are still bleeding over here at TSHIT central.

It's no secret that we've held the Dunfermline band on a lofty pedestal after hearing the lads crank out copious stellar tunes from our home speakers over the years. Their dynamic punk-, new wave- and rock-styled tunes take you on a journey across the rolling hills of your mind and body and are always welcome additions to any gathering.

We've never seen them in a live setting, but I interviewed father-and-son guitarists Bruce and Jamie Watson when they rolled through Seattle with Big Country. Good guys, those two.

Songs from The Clash ("Complete Control"), The Adverts ("Gary Gilmore's Eyes"), Sex Pistols ("Submission"), Magazine ("The Light Pours Out of Me") and others get the Skids treatment on the 14-song new record, plus you get fresh versions of the band's own "Into the Valley" and "The Saints Are Coming." On the latter Skids tune, they'll surely show Green Day and U2 how it's done, right?

The album's moniker gives a nod to the Skids' hometown venue, the historic Kinema Ballroom.

Jobson noted in a press release: “John Foxx of Ultravox was cool, handsome and wrote poetry rather than lyrics. He made it OK for the rest of us to be a bit arty. ‘Young Savage’ was a massive hit in the Kinema.”

He's loved putting the album together with his mates, and reminisced about the embryonic days of the band, which formed in 1977 and was powered on guitar by the late Stuart Adamson.

“It reminded me of those early cathartic days, and of course where I came from. The place that made me what I am. I would like to dedicate the album to all of the Punks and Ghosts from the day of the Kinema who like me had their life transformed through a love of music," he said.

Oh yeah, the Skids also released the killer album "Burning Cities" in 2018, so that's something to check into as well. 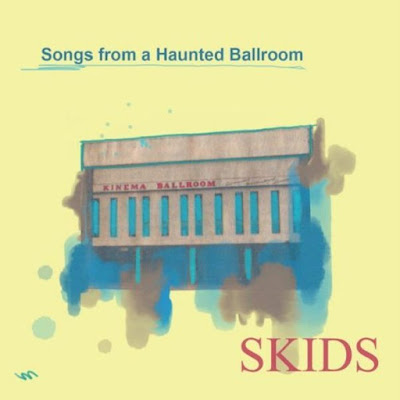