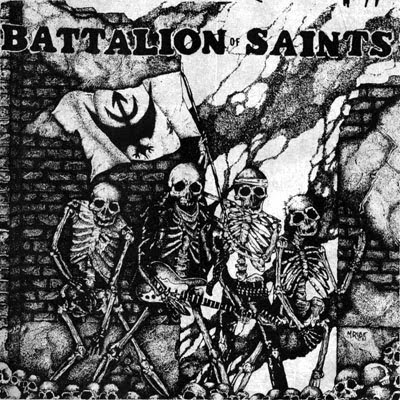 Before I even heard a note, I knew that Battalion of Saints was my band.

The name was intriguing, and I could just imagine that the San Diego band would be rock solid and make my 15-year-old ears bleed.

In early 1982, I believe, I got my chance to experience the aural attack for the first time via a mix tape that Tim Tonooka of Ripper magazine from San Jose sent my way to Redondo Beach. It was in the pages of Ripper that I first saw the BATS' eye-catching, spiky and winged-like logo, and the head-crunching tunes on the four-song "Fighting Boys" EP matched it perfectly.

If "Fighting Boys," "E/B," "Modern Day Heroes" and, of course, "I Wanna Make You Scream" were the last four songs ever written, I would have been a happy lad to be privileged to hear them. Just the perfect blend of hardcore and metal to satisfy my musical palate. Even though I'd replaced my old AC/DC and Van Halen records with Minor Threat and Black Flag vinyl platters at that point, I was now thrilled to be hearing a glorious mixture of the two styles.

June 11, 1982, was a big night: BATS at Bob's Place in LA and I was not going to be denied. I offered to ride in the trunk of a friend's car to the gig since the inside was packed. Really, I would have done it! However, I managed to squeeze inside, and we were off. In short, it was everything I thought it would be: just a blazing set and lots of sweat and energy.

Smith told me of a gig about a month later in San Diego with the BATS playing with Minor Threat (Husker Du and Men of Clay would later complete the killer bill) at the International Blend on 30th Street, and thankfully, my friend Mike and I were in attendance. Once again: raging.

I soon struck up a pen-pal friendship with the band, and live and demo tapes, T-shirts and stickers came my way. Whenever I saw them live in LA, we'd always chat and have a good time. 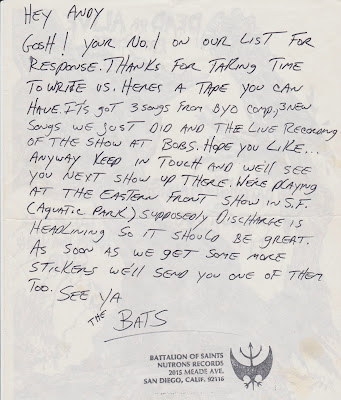 The last time I saw the band live was at the Vex, and after they finished, Smith spotted me from the crowd and gave me a firm handshake with his bloody hand-- he was playing his axe so damn hard, you know.

I saw Smith and Anthony about a year later at a Husker, Minutemen, Meat Puppets and SWA gig in San Diego -- at least I got a chance to speak with Smith before he passed away not too long after that. A true guitar warrior, for sure. 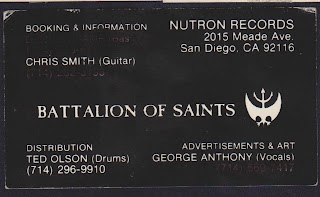