A look inside the 'My Rules' photozine with man behind the lens Glen E. Friedman

While watching Black Flag blast through its set time and time again in the early 1980s, Glen E. Friedman was stoked to be taking action-packed photos with his trusty Pentax, or just leaning against guitarist Greg Ginn's amp when he wasn't clicking away.

"Just let Greg Ginn blow my ears out," he said with a laugh in a recent phone interview from his New York home.

"I just loved the sound of (Black Flag's) music: it did something to me, it turned me on and excited me. The personal politics and just the sound that they had, I just thought it was fucking awesome-- in the truest sense of the word, it was awesome, you know? And their power, and their energy, and the excitement-- it just couldn't be matched."

He sold out his one-and-only press run of 10,000 copies at $2 each, and some of these original copies fetch in the $200-$300 range on the bidding market these days. A "My Rules" e-book is scheduled for release by this summer for $3.

I've still got my original copy, and it's still mostly intact except for the missing Husker Du pic (which I tore out and hung on my bedroom wall in 1982) and Ian MacKaye's face from the back-cover collage (which leaves a hole in the back of Henry Rollins' head in the inside photo).

While leafing through this zine on a recent morning, Friedman and I spoke about "My Rules" and how it came to be and how people reacted to his photography:

With Chuck (Biscuits on drums) and Dez on second guitar, and Henry and Greg and Chuck Dukowski, it was amazing-- it was an amazing, amazing band at its peak, there's no question.

So that's why they got the center spread in the magazine, and I was inspired by them and that's why I named "My Rules" "My Rules" after the song by Black Flag, but also because it was my rules: it was my own zine, it was my idea, and everyone telling me I can't do this, and I can't do that and I just decided I'd do it on my fucking own and make my own thing.

The best photos come from when you're inspired the most, and I was certainly inspired the most by them...I probably shot one out of five shows because I saw Black Flag so much. And when you look back on history, I wish I had been taking pictures at the parties and stuff like that, and even at the rehearsals, which I did sometimes.

Some of my best shots are in that one rehearsal studio, that one time where Chuck hits my camera with his bass, and Henry with all his tattoos, you know the photo from the cover of the Black Flag book "Spray Paint the Walls," and that Greg Ginn shot -- it's ferocious.

They inspired me, so I in turn had to inspire everyone else. I had to show people the way I was seeing things. 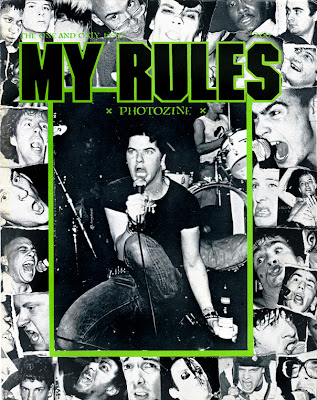 I really didn't know who to put on the cover, that's why I put all that collage (around him). It made it kind of obvious that Darby was dead... No one could argue with that, because no one else was dead in the scene, and here's your cover person, and the Germs were obviously very influential and inspirational. (Photo taken at the Germs' last show at the Starwood, Dec. 3, 1980.)

ALL OVER THE MAP

There's a good variety of bands in there. I don't love every band that's in there, but I wanted it to be inclusive and there are people, they inspired me at one point or another to take a picture of them.

Everyone gets the space in that magazine according to how important I thought they were in time. Some people get a little more space than they deserve because I had better photos, some people get a little less because I didn't have such great photos. (Some of his favorites were Minor Threat, Husker Du, Social Distortion, SS Decontrol and the Big Boys.) 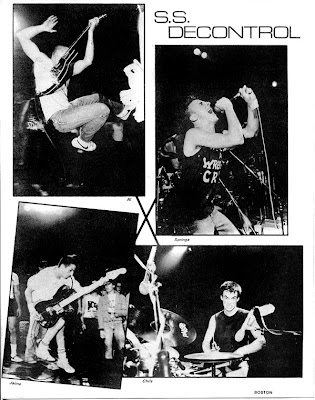 The Beastie Boys I remember complained that they weren't in there (Friedman wasn't too fond of the band during their hardcore days)... I said, 'You guys are in there, there's a sticker on (Necros singer) Barry Henssler's leg, there's your representation, there you guys are, that's what you deserve.' They gave me a lot of shit over that back then, you know, which is pretty funny, but you know those guys always had fragile egos.

(After thinking about his Dead Kennedys shots, he noted): The Dead Kennedys, I think really in a lot of ways, helped to revitalize punk rock with that radical name. It kind of was dead in England again until their album came out, and it kind of woke up England again, and then all of a sudden, you had the Exploited and all these other Oi! bands-- it came to get in the limelight again.

(While making prints for 12 straight hours in the bathroom/darkroom of his mom's house in Los Angeles for the "California Hardcore" book, Friedman saw his quality photos and decided to go at it on his own and called Kevin Thatcher, then publisher/editor of Thrasher magazine, for assistance. Six of his photos of Black Flag, Minutemen, Circle Jerks and Dead Kennedys are featured in "California Hardcore.")

I gotta get this shit out there...I made that shit from the ground up, that was real.

It worked out really well, people loved it. All over the world people picked it up and it was great, and I'm just real happy I did it.

(He hand-designed the layout at home, and on weekends he drove up to San Francisco's Hunter's Point Shipyard, where Thrasher was put together, and did the hand's-on work -- pasting, half-toning, etc. -- with Thatcher.)

(He used and still uses a Pentax K 1000 or a Pentax Mx: "Pretty manually oriented cameras-- no auto focus, no auto exposure or any shit like that." He often utilized a small Vivitar flash for shooting in dark clubs.)

(The flash) had a little blue circle on the side of it, looked kind of like a Germs circle. I thought it was cool and it was small and it was compact. I broke a couple of those over the years. No lenses got broken except for doing skateboarding photography, and even then I never had any broken glass, but I did get dented lenses. So the equipment was never very important, I'd say the minimalist stuff is the best-- it's all about the eye. 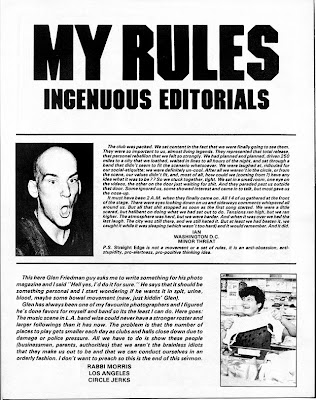 TO SHOOT OR NOT TO SHOOT?

Sometimes during the shows, I would put my camera down and dance myself. I was having fun most of the time when I was shooting back then -- a lot of fun -- and that's again why I didn't shoot a lot of the time. And people would ask, (after) I started to become known as a photographer, and they'd be like, 'Well, where's your camera?' I always knew that that was a person that didn't know me well -- it's like 'Where's my camera? I don't know, where's your fucking camera? I'm here to have a good time, I take pictures sometimes, but that's not my whole life.'

But when I was taking pictures, yeah I'd be right in the front, because I knew everyone there, and sometimes I'd sit on the stage and sometimes I'd stand right in the front row, and certainly I got whacked a lot of times, but anyone who's been to a show knows what you're doing, you know how to stay the fuck out of the way and accidents happen -- so you get hit, no big deal.


FROM ROCK TO PUNK

I had been shooting skateboarding for like five years, cutting my teeth on the Dogtown crew and hardcore action, and punk rock was really just an extension at the time of what we were doing in skateboarding in a lot of ways. But it also appealed to our musical senses-- we all loved music so much, before punk rock we were skating to Led Zeppelin and Jimi Hendrix, and truth be told, Ted Nugent, because it was the most high-energy, exciting stuff there was and it got us going.

When it came time to taking pictures of punk rock, I'd been working for a magazine (Skateboarder), I got my first pictured published when I was 14 years old, I knew what had to be done for a vertical full-page shot. And that was always the goal, to get things big in the magazine, to get your viewpoint across, to inspire people with your imagery, to do something someone else hadn't done.

So for me, I was practically an old hat at it, I had the timing like no one else did...I knew, because of my skateboarding days, I knew when the moment was coming and I waited for it, and I knew how to compose at the same time and get the action. I actually was really working it, and that's why a lot of people invited me to take pictures of the shows or were excited when I would be taking pictures of their band at the shows-- they knew they would get something rad. 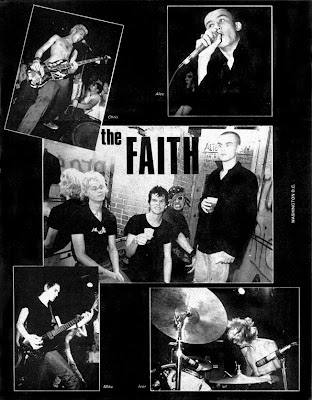 * At age 15, Friedman took the "My Rules" Nugent shot at the Nassau Coliseum in New York.

* He sang backup vocals on Black Flag's "TV Party" single and "Damaged" LP version. He also appeared in the video for the song.

* Nowadays, he spends time going through his archives and licensing his photos to magazines, books and documentaries. He plans to put together a large book that features the best of his "Fuck You Heroes" and "Fuck You Too" books with some unreleased pics. ("I'm still inspired by my old stuff, that's why I keep working with it.")

*He recently unearthed all the pieces from the original "My Rules" in his archive in his mom's attic: hand-drawn layout, film that went on the press, all the original prints from 3x5 to 8x10, old advertisements with rub-off letters onto 8x10 photos for Flipside and Maximum Rock and Roll and other zines.

In the next year or two, all these artifacts may be involved in a "My Rules" start-to-finish exhibition in New York. 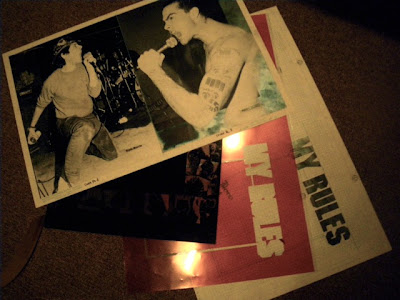 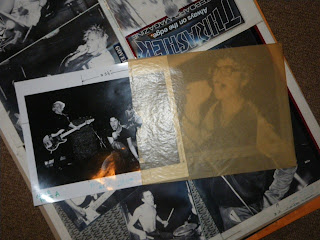