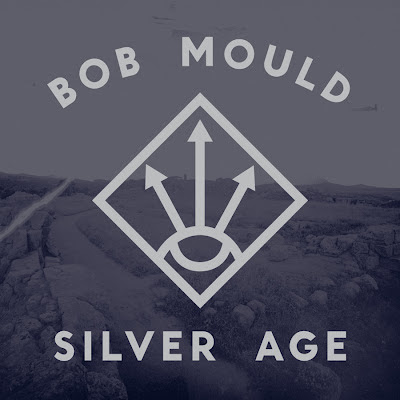 That's what Jason Narducy told me about a year-and-a-half ago after he finished a gig with Telekinesis at the Crocodile in Seattle.

Bob Mould summoned Narducy about a year later to get his bass gear ready for some rock action. Drummer Jon Wurster got the nod, as well. And here we are with "Silver Age" in our faces -- and smiles are spread across them as far as Mould's guitar-worn hands can reach to dig into his past for inspiration for these 10 golden nuggets.

Mould is surely smiling, too, as he delivers these Sugar-coated, fierce tunes into our eardrums, and might as well be asking, "Do you remember... how it's properly done?"

To me, this album celebrates the past, but can also act as a companion piece in paving the path to where one stands today and hopes to journey in the years to come. It's uplifting yet forceful, as one often has to push to be heard and appreciated.

"Star Machine" is the perfect opener, rolling along smoothly at the start, packing a wallop soon after and then reaching high above the roar with fists of vintage Mould vocal melody that transition into classic Mould guitar-solo work. If that isn't enough, there's nine more essential songs on the docket.

The crunchy "Silver Age" -- containing the older, wiser but still angrier line, "I'm never too old to contain my rage" -- paves the way for "The Descent," a song I would have begged my non-Husker-listening friends to check out alongside "Celebrated Summer" and "Makes No Sense At All" back in the day. "The Descent" and track nine, "Keep Believing," would have surely thrown a monkeywrench into their world (in a good way, of course) as the twosome roams into one's needful-things category. Hell, my non-Mould-listening friends should be on board with this pair ASAP.

Other standouts include the towering, bludgeoning "Steam of Hercules," which treads on Sugar's "Explode and Make Up" terrain; the crackling "Angels Rearrange" ("Don't be scared of change, because it may be time to rearrange"); and the fragile "First Time Joy," which closes the set in soul-searching "Workbook"-like fashion.

It's been a while since Mould's rocked this hard and really nailed it with each track on one of his albums. When he asks on "The Descent" ... "Can I try to make it up to you somehow?" ... we can only answer, "You've just done it."