Mike Watt: Whisperin' while hollerin' with the Missingmen / Interview

Mike Watt was dizzy, he was slammed with a fever. But for the econo-man, king of the bass jam... the show must go on.

And he's an ultra-busy man, as well. During the last week, Watt joined Iggy Pop to belt out Stooges tunes in front of massive crowds in France and Italy. He got sick along the way, but pulled together and traveled to Seattle with fellow Missingmen Tom Watson (guitar) and Raul Morales (drums) to perform their "Hyphenated-man" opera at the Tractor Tavern on Friday. They'll be on the road through November.

I met Watt in the early '80s while hanging around the SST Records office on Phelan Avenue in Redondo Beach. He was with the Minutemen then, and he and the SST guys had a big influence on me with their extraordinary work ethic.

Thanks to friend Travis, he set up the following interview with Watt after Friday's gig in "return" for helping to haul some of the band's gear into the van. Bobo and Cat get credit for sticking it out after the gig while I got the job done backstage. 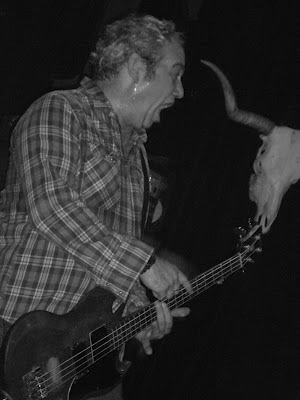 You see that piece, man, it's got I don't how many hundred parts. It's one big song, 30 main parts, but then each part has parts-- there was parts when I fucking didn't know where I was.
I don't wanna make excuses. In Vaudeville, I would sit on the stage and you work the room. It ain't a top-40 band anyway, we've got the unique flavor.

Crowd, very kind-- for one thing, to tolerate a piece like that "Hyphenated-man"... (they may say) "What the fuck's that about?" And they're interested, they wanna see where it's going-- they become part of it.

That's the difference in recording the thing and playing it for people-- they were really with it. Yeah, there was some yamming, there was a bar over there and sometimes we whisper... You know what? That's part of the reality. Any farmer would tell you, "You want a good crop, use a lot of manure." You don't get mad at people for that, you just say, "Wow, that's the situation and let's try to grow something in this petri dish." Maybe some of that stuff made people uncomfortable, like, "Why is he whisperin'?"

What's a gig without people to play to? (Otherwise) It's just a prac.

It's part of the journey, like driving around the U.S., Europe, too, or Canada or wherever, Japan ... there's mountains, there's bayou, there's beach, hills and valleys. You know, if it got all same-ol, same-ol, it would probably be lame. But you get dealt a hand, and I think it's up to you to either shirk or give it your best shot....

One good thing is one life hopefully is many gigs. And I learned from my buddy getting killed, D. Boon in the accident, you never know when the last gig is, so do you really wanna go down on one where you tried half way? 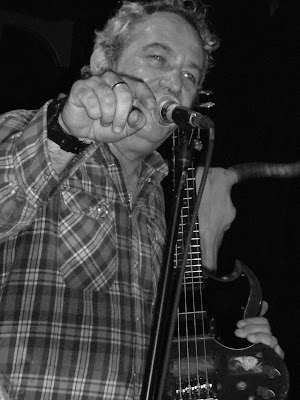 GOOD OLE DAYS STICK WITH YOU

You know coming from them SST days, that's where I learned a lot of this.

If that rubbed off, that means you were open minded enough to let some crazy guys (influence me, as in Andy)...It was all about people being open enough to check out other stuff-- it was not a popular thing. So I don't even have to explain... you know and you feel it and that's why you're writing about music still-- cuz it's in you, right? You're compelled, right?

Well, that's why Watt's in it. It's work, it's my job--- work ethic, it's not just a master-slave thing, it's like, "Whoa, I'm here to learn, everybody's got something to teach me." OK, I'll bring some stuff, but that's only half that equation..... (Editor's note: A guy from the opening band, Hounds of the Wild Hunt, comes in and shakes Watt's hand and thanks him for playing with them... Watt: "Thanks for sharing the stage, that was very kind of you-- your band's great.")

We're still touring on the circuit Chuck Dukowski built-- I wish they could get a lot more acknowledgement, Black Flag (Editor's note: At that point, a woman comes in and tells Watt that her name is Kira; she was named after Black Flag bassist and Watt's ex-wife, Kira Roessler)...

What you saw out there, in a weird way, is a product of that movement. It's just the weird Pedro-Watt-via-the Minutemen-D. Boon-Georgie (Hurley) kind of thing. I'm a part of that--- It was not a stepping-stone thing, it was the get-go, it was the shove.

Even when I doubt myself, when that fever got me tonight, the momentum of those days -- and it's not a "Happy Days," Fonzie and Potsie and that shit -- it's the kind of ethics that were built with that shit, still apply now, and that's why I do call it a movement... there's a lot of autonomy, not much hierarchy. There would have been no "Double Nickels" if Husker didn't do "Zen Arcade" -- shit like that.

(Editor's note: Speaking of "Double Nickels on the Dime" -- Watt and the Missingmen cranked out a few Minutemen tunes to close the set, including "The Glory of Man.")
﻿﻿