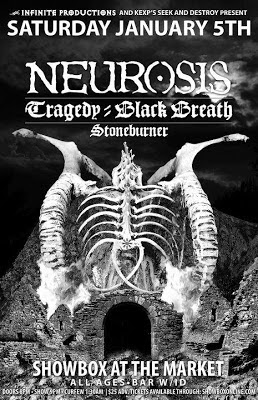 The first time I ever saw Neurosis was in 1990 on their "Word as Law" tour. This show changed my life, as I have never seen a hardcore punk band with this much intensity before. They played at Washington Hall in Seattle’s Central District and the entrance fee was five dollars, maybe reduced to three as the headlining act cancelled as I recall. I must admit, this is the best show I have ever seen in my life. I’ll never forget how silent the audience was when Neurosis ended their set. We were all literally blown away and somewhat speechless as we made our way outside for air.

To say I’ve been a fan of this band is an understatement. I have seen most of their Seattle shows over the last twenty-three years. Neurosis has continued to draw more of a "metal" crowd over the years more so than the punks back in the day. Their live sets have always been a unique "spiritual" experience for me, but the sound and atmosphere of Neurosis is respectively not for all. It became a running joke about how there is more “color black per square inch” at a Neurosis show than anywhere on the face of the Earth. Show after show have proven this correct.

Here we are January 5th, 2013, twenty-three years later. Neurosis is playing at the Showbox and tickets cost us approximately thirty dollars each (including the service charge).

Stoneburner (Portland) took the stage and started the show off right! I don’t know much about this band other than they delivered some unique doom metal. I look forward to hearing more from them.

Black Breath was back from tour and made it to the stage to deliver a powerful set. They were for sure complimentary to the evening of awe.

Tragedy (Portland) without a doubt, simply scorched the place. I have not seen fire like this for years. Where the hell have I been? They formed in my hometown of Memphis and relocated to Portland. Pops, a friend of mine, has been talking about them for a while, stating they have the same energy as early Discharge. The comparison could not have been more true! They ripped through an awesome set of politically fueled lyrics and anthems infused by tight-as-hell, powerful guitars and percussion. We were all in a frenzy when “Darker Days Ahead” (title track of last release) was dropped on the audience like a giant sack of lightning and chainsaws. I think I wiped a way a tear! This is my new favorite band.

The opening bands all delivered great performances. As we were all catching our breath and anticipating Neurosis to start, I could see the various band members making their way to the stage performing a last-minute sound check.

Scott and Steve appeared suddenly on the stage looking like a couple of druids with their black hoodies, picking up their instruments as if preparing for an intense battle, yet so relaxed. A few months ago, I caught Scott’s solo performance at El Corazon. It was a beautiful performance. I looked around at the Neurosis audience and wondered to myself, "Where were all of the people then?" Making my way around the crowd, I was surprised by how many people were also at the show I mentioned earlier at Washington Hall decades ago. I digress.

Suddenly, without any intro, warning, or even a 1-2-3, Neurosis comes alive with the power they are known for.

They started with “Eye” from their earlier release "Through Silver in Blood." Instantly the audience is captured and a symbiotic relationship is forged for the remainder of the evening. I was not in the pit, per se, but I was amongst the huge swaying mass of an audience improvising the standard broken neck "dance." It is sort of funny, yet so right, to witness a sea of people doing this in unison. It was just a ball of mass moving helplessly to the ambient power chords and complicated rhythms projected by the band. I swear, I couldn’t help but go into convulsions the whole time. To me, Neurosis is more like Joy Division more so than any metal band.

Neurosis played cuts from their latest album, "Honor in Decay," such as “My Heart for Deliverance” & “Bleeding the Pigs.” We were also blessed by previous releases such as “Locust Star” and “Times of Grace.” Their set was excellent as usual.

About a month ago, Neurosis mentioned they will no longer use visuals for their live sets. The visuals were usually just as awesome as the music and would enhance the experience. This is the first time they have played Seattle without the visual projections and it was actually good to see them as I first remembered them.

Neurosis finished their set and left the stage. That’s it! The audience left satisfied and in awe. It was a great night and I am sure all of us are looking forward to their next show.
Posted by Andy and Cat Rose at 6:08 PM